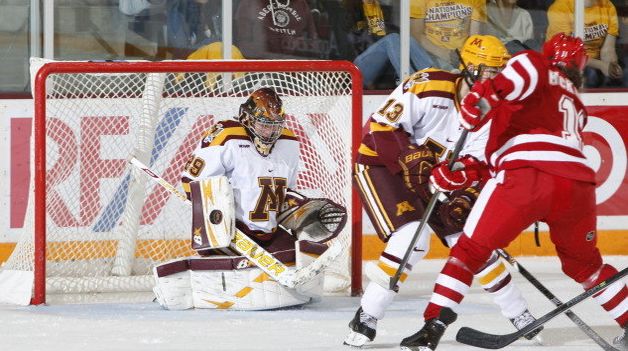 Minnesota goaltender Amanda Leveille stopped 55 of 57 Wisconsin shots in the Gophers’ win and tie over the weekend including 32 of 33 in Sunday’s series finale. (Photo / University of Minnesota Athletics).

With 2:07 remaining in overtime during Sunday’s series finale, the University of Minnesota women’s hockey team received a power play after Wisconsin’s Katrina Zgraja got called for interference. In many cases, the opportunity is a chance to complete a comeback which began in the third period when Hannah Brandt tied the game.

That wasn’t the case Sunday. Instead, the Badgers stopped Minnesota from getting a chance when the Gophers had possession for 75 seconds and stopped a losing streak in the process.

Minnesota’s winning streak against the Badgers turns into an unbeaten streak as the two teams played to a 1-1 tie Sunday at Ridder Arena. The Gophers (19-1-3, 12-1-3-1 WCHA) won a shootout – the first time it has since January 2012 – to take an extra point in an effort which serves as a season-long one in the standings.

Minnesota coach Brad Frost said his Gophers were not at their best.

“We looked sluggish after playing three lines last night and five D,” said Frost, whose team was playing its fourth game in eight days. “I’m proud of our kids with the guts that they showed because (goalie Amanda Leveille) played great. She kept us in there until we could get one and I’m obviously happy with five points on the weekend.”

In out-shooting the Gophers 33-30, Wisconsin (17-3-2, 13-3-2-0 WCHA) takes home more than a tie. The one point earned is important because the Badgers still lead (41-40) in the WCHA standings by that margin. (Minnesota has two games in hand on Wisconsin, however.)

It’s safe to say Sunday’s finale turned into a physical slugfest between two rivals. Neither would let the other push them around either on the ice or on the scoreboard. Two of the top four offenses in women’s hockey were stifled. Despite Wisconsin coach Mark Johnson changing up his lines in an attempt to get more focus and offense compared to Saturday’s 4-1 loss, every shot attempt had to be earned.

The rivalry between the number two and three teams in the country was on full display at Ridder Sunday.

“The defense kept a lot of shots to the outside so it’s kind of deceiving how many shots they got versus the quality of shots,” Leveille said before adding. “I like getting shots so it helped me get into the game.”

The Badgers spent the final five minutes in the offensive zone coming close to getting a goal with Minnesota either blocking shots or Wisconsin being unable to get one in an open net. Just when it looked like the Gophers could escape the period weathering the storm, Sylvester got her second of the weekend.

“She’s doing good,” Johnson said about Sylvester, a Warroad, Minn. native. “She’s been a good four year player for us and like a lot of seniors they want to go out on a high note.”

Brandt tied the game with 6:32 remaining on a dirty goal in front of the net. The junior, who leads the nation with 21 goals, got hers by crashing the net and knocking a rebound over Desbiens with her body. It was reviewed yet ultimately deemed a good goal.

“Obviously things weren’t going our way for scoring goals today,” she said. “I think at that point anything goes and you just try to put the puck in any way you can.”

Both teams had chances in the third period and overtime before the shootout, in which Brandt was the only one of the six shooters to score. Though it appeared Dani Cameranesi may have won the charity contest for the Gophers, the referees ruled Desbiens made the save. That forced the ending on Leveille, whose nonchalant stop on Katy Josephs was the first calm moment.

“For us it’s actually a little more full just because we were the ones that came back and we know we didn’t play our best game and we still came away with a tie against a very good team,” Brandt said. “I think we’ll take a positive out of that, but know that we have to play better for sixty minutes.

“We’re happy with the result I guess.”

Frost mentioned after Saturday’s 4-1 win that no two games in the team’s then-14 game winning streak against Wisconsin have been the same. In a way, he was right.  Minnesota had already completed a 2-1 third-period and overtime comeback against the Badgers in Madison.

Although the Gophers left Sunday with two points in another comeback that wasn’t the team’s best performance, history was not going to repeat itself.