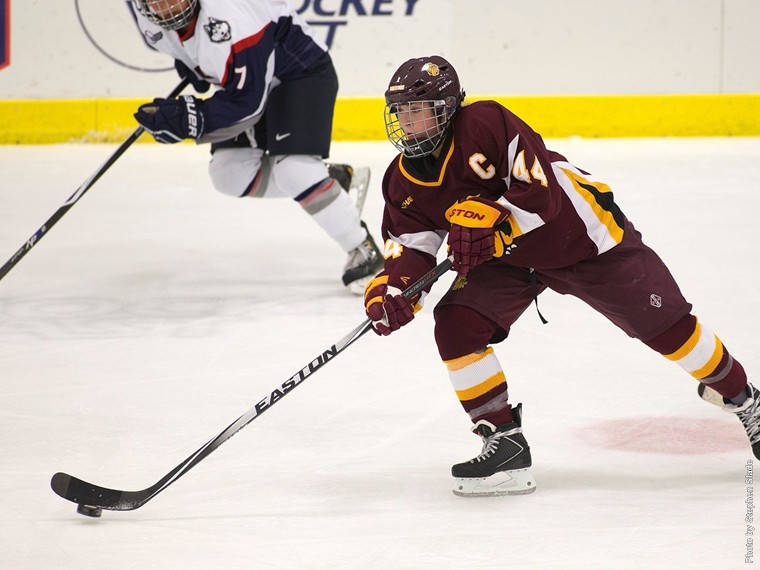 UMD senior co-captain Zoe Hickel will be expected to lead the Bulldogs both on and off the ice.  (Photo / Minnesota-Duluth Athletics)

The Minnesota-Duluth Bulldogs entered the 2013-14 season with plenty of reason for optimism but never lived up to that promise as a number of players fell short of expectations. UMD coach Shannon Miller felt she needed to make some roster moves in order to make her team a legitimate contender this season.

And pretty major ones at that.

Seven rostered Bulldogs were cut in the offseason and Miller brought in nine new faces while bringing two back from a season ago.

“We had to make some changes because those people didn’t belong in our Division I program and it was hurting our chemistry and hurting our performance,” Miller said. “We made the changes we had to make, brought in kids that are really good. Good athletes that want to be at a winning D1 program and want to help us win.”

Returning defenseman Brigette Lacquette spent the majority of last year embedded with Team Canada in preparation for the Olympic Games but returns this weekend in time for UMD’s series with WCHA rival Wisconsin. Fellow senior Brienna Gillanders returned to the ice this past weekend against Connecticut after sitting out most of the previous season with an ACL injury.

A source of apprehension for the Bulldogs is goaltending. UMD starter Kayla Black has been known to stand on her head when needed, but with her injury history there will be plenty of concern if she goes down. Backup net-minder Karissa Grapp has started only a handful of games, and while she’s played fairly well in them, she has yet to prove herself as a legitimate starter.

The Bulldogs will rely on a mix of veterans and newcomers for success this season. Minnesota-Duluth returns four of its top five leading scorers including senior wingers Zoe Hickel and Jenna McParland. Hickel will lead the team as co-captain with fellow senior, and Duluth native, Emma Stauber.

Stauber said that she saw good team chemistry in the early practices before the start of the season and that one key to her team’s success this season will be the leadership of the upperclassmen.

“We have big sisters and little sisters,” Stauber said. “So we’re paired up with one of the new girls and are just someone else they can rely on or come to with questions.”

Why the Bulldogs will exceed expectations:  With seven graduating seniors, the current Bulldogs are on the clock if they want to win a National Championship and they know it. With both Brigette Lacquette and Brienna Gillanders returning for their final seasons, the Bulldogs are hungry and ready to make a long post season run.

Why the Bulldogs will fall short of expectations: With the addition of so many fresh faces, the Bulldogs could run in to trouble when it comes to offensive production and dealing with adversity without a whole lot of experience. Every year the Bulldogs coaches seem to be high on the team they have to work with, but the closest UMD has come to competing for a National Championship was 2011, a loss in the first round of the NCAA tournament.