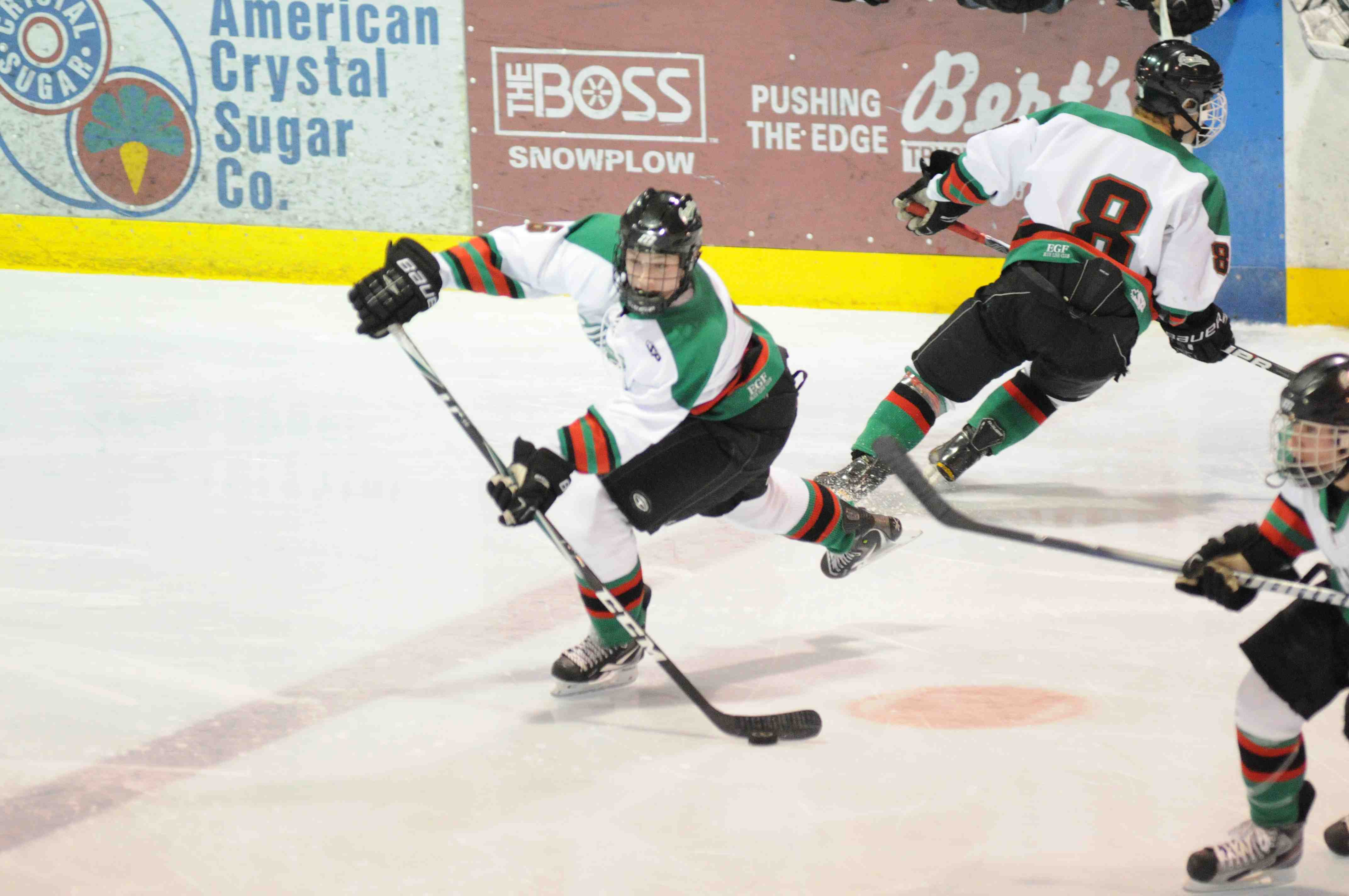 As the 2013-14 high school hockey season begins, the Class 1A rankings have a bit more intrigue than any year since St. Thomas Academy began its three-year state championship reign. With the Cadets moving up to Class 2A, the field seems to open up a bit, but a few familiar programs still grace the top-10 preseason rankings. 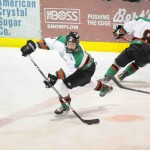 The Green Wave may have lost to Breck in the Class 1A third-place game last winter, but they surge past the Mustangs in the first installment of the rankings this season. The main factor is depth on the blue line. All six regular defensemen return for coach Tyler Palmiscno and all have very complementary yet contrasting styles.

Senior Colton Poolman (6-7-13) is a two-way player and two-year captain who excels in any situation on the ice. He’s the anchor of a group that also includes small, mobile blue liners such as Taylor Brierley (1-15-16) and Tye Ausmus (6-8-14), and big-bodied hitters such as Eddie Eades (4-19-23). Trevor Selk and Nathan Peabody also received state tournament experience as the fifth and sixth defensemen a year ago.

Coach Les Larson may not want to hear it, but the Mustangs just may take over the mantle of “most hated Class 1A private school” now that St. Thomas Academy is gone. Breck has been a regular visitor to St. Paul over the past two decades, making 10 trips and winning state titles in 2000, 2004, 2009 and 2010. With the rest of the preseason top six consisting of northern schools (and all public except for Duluth Marshall), Breck stands out as an outlier.

After four consecutive runner-up finishes in Class 1A, is this the year Hermantown and coach Bruce Plante finally get to raise the championship trophy? It’s entirely possible, even though the Hawks graduated their top four scorers and lost UM-Duluth recruit Neal Pionk to an early departure. Such is the state of the Hermantown program that those losses can be absorbed without any crippling effect. 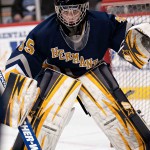 Scott Wasbotten (17-12-29) scored some big playoff goals for Hermantown last year in its run to the title game. He’s a tough and aggressive player in the typical Hawks’ mold as is junior Nate Pionk (11-13-24), the only other double-digit scorer returning. Senior Zach Kramer (8-17-25) will move back to the blue line this winter to help anchor an otherwise young defensive corps that was bolstered by sophomore Hibbing transfer Eric Gotz (2-12-14), a USA Select 15 selection. The Hawks will count on senior goaltender Adam Smith (17-1-1, 1.60, .919) who came on strong to earn All-State honors last winter.

With five players participating in the Upper Midwest High School Fall Elite League, no team in Class 1A may have as much top-shelf talent as Warroad. The Warriors are loaded for a run at the state tournament — and top-ranked East Grand Forks — a familiar position for the program. Juniors Jared Bethune (26-23-49) and Kobe Roth (25-20-45) burst onto the scene as sophomores and led the Warriors in scoring, but are very different players. Bethune is a big player with a good skating stride and tough in tight spaces, while Roth is tiny but may have the best hands and vision of any player in the state. Add in senior forward Kyle Sylvester (14-17-31), who has been playing varsity hockey since his freshman season, and the Warriors have a tough group of top forwards.

The Jaycox brothers — senior Nick Jaycox (3-16-19) and junior Luke Jaycox (1-7-8) — will see big minutes on the blue line, as will hard-hitting Blayke Nelson (0-5-5). But perhaps key to the Warriors’ hopes will be finding a full-time goaltender.

If the rankings seem skewed towards the northern half of the state, that’s no surprise. Duluth Marshall has won its section six of the last nine years, including back-to-back appearances from Section 7A the last two years. Coach Brendan Flaherty’s team has done so despite graduation losses that included Mr. Hockey finalist Judd Peterson. It’s a tribute to the depth of talent in the Duluth area that the Hilltoppers have had such a run of sustained success.

Last year’s team was young, but still ran the section table to get back to state. Now with another year of experience, the ‘Toppers should have been overwhelming favorites. But the biennial MSHSL section juggling placed Hermantown back north and suddenly made for a great two-team race.

With three teams in the top-six, Section 8A certainly could lay claim to the toughest Class 1A section in the state. There’d be no argument here. Thief River Falls is no third wheel. Just a year removed from back-to-back state tournament appearances, the Prowlers have the most veteran goaltender in the section in Tanner Holmes (12-9-0, 1.89, .929), a key factor in the playoffs. Coach Tim Bergland has created a culture of success in his home town that has resulted in an annual contender. Expect the Prowlers to work hard and battle to the final whistle under his watch.

Of course, having players such as senior Isak Bergland (17-26-43) and senior defenseman Adam Pancoast (4-11-15) certainly helps. Both played elite hockey in the fall — as did Holmes — and anchor their respective positions. They also play in all three zones, something that Bergland stresses. The Prowlers also have some nice youth on the way in sophomores Wyatt Orloff (2-15-17) and Ethan Johnson.

Is it time for another Scarlets’ run? Mankato West has arguably as much veteran experience returning as any program in the state — and coach Curtis Doell knows this is his chance to break Rochester Lourdes’ stranglehold on Section 1A. Since West last went to state in 2008 (its only appearance), Lourdes has run the table. But it looks like this is West’s year.

Honestly, once the rankings move past Mankato West, the rest of Class 1A gets much tougher to peg. There are traditional powers that experienced steep graduation losses as well as programs on the rise that are hoping to make a name for themselves. It results in a messy set of rankings past the No. 7 spot.

Totino-Grace is one of those traditionally strong programs that must show it is immune to the absence of last year’s top players. Gone are both goaltenders, all-time leading scorer T.J. Roo, sniper Derek Lodermeier and defenseman Marco Lucarelli. Add in the transfer of Carter Roo to Benile-St. Margaret’s, and that’s plenty of talent gone from coach Mark Loahr’s team. Can the Eagles’ recover?

You bet. It starts with junior defenseman Jason Krych (7-20-27) and hard-nosed Kai Barber (13-9-22), who also stars for the Totino football team. They’ll be counted on to lead the Eagles back to the top of the rankings. And with St. Thomas Academy now absent from Section 4A, the Eagles slide into the favorite’s role.

Right on Totino’s heels is Section 4A rival Mahtomedi. The Zephyrs return 15 players who have varsity experience, including hulking sophomore Jack Becker (11-17-28) and junior power forward Kellen Campbell (12-15-27). They’ll be key contributors for coach Jeff Poeschl’s team, which has had plenty of success in the past two decades. Mahtomedi has been to state seven times since 1992, including a two-year run in 2009 and 2010 when it upset St. Thomas Academy in the section playoffs.

Mahtomedi must be strong in its own zone to achieve this ranking, something senior defenseman Trevor Dittberner (4-3-7) can do. He’s a physical, shut down defenseman who can throw his 220 pounds around. He’ll do so in front of a new goaltender, as regular netminder Colin Denis has graduated. Backup Thomas Hennen (5-6-0, 2.83, .877) could see first crack at that position.

This season is a huge test for the St. Cloud Cathedral program and how consistently excellent it has been under coach Eric Johnson. The Crusaders had another 20-win year last winter, but lost almost every key player from that team save for senior forward Will Hammer (19-22-41) and senior defenseman Dan Bailey (2-11-13). Most of the Crusaders’ top players graduated and with a couple of early departures, the lack of veteran experience is obvious.

Johnson must call on a big sophomore class to step up its play and keep the Crusaders relevant. Early scrimmages have shown they’re capable. Cathedral also is on the move in the MSHSL’s section realignment, going from the geographically widespread Section 5A and into a the St. Cloud-area Section 6A along with traditional rivals Apollo, Sartell-St. Stephen, Little Falls and Sauk Rapids-Rice.