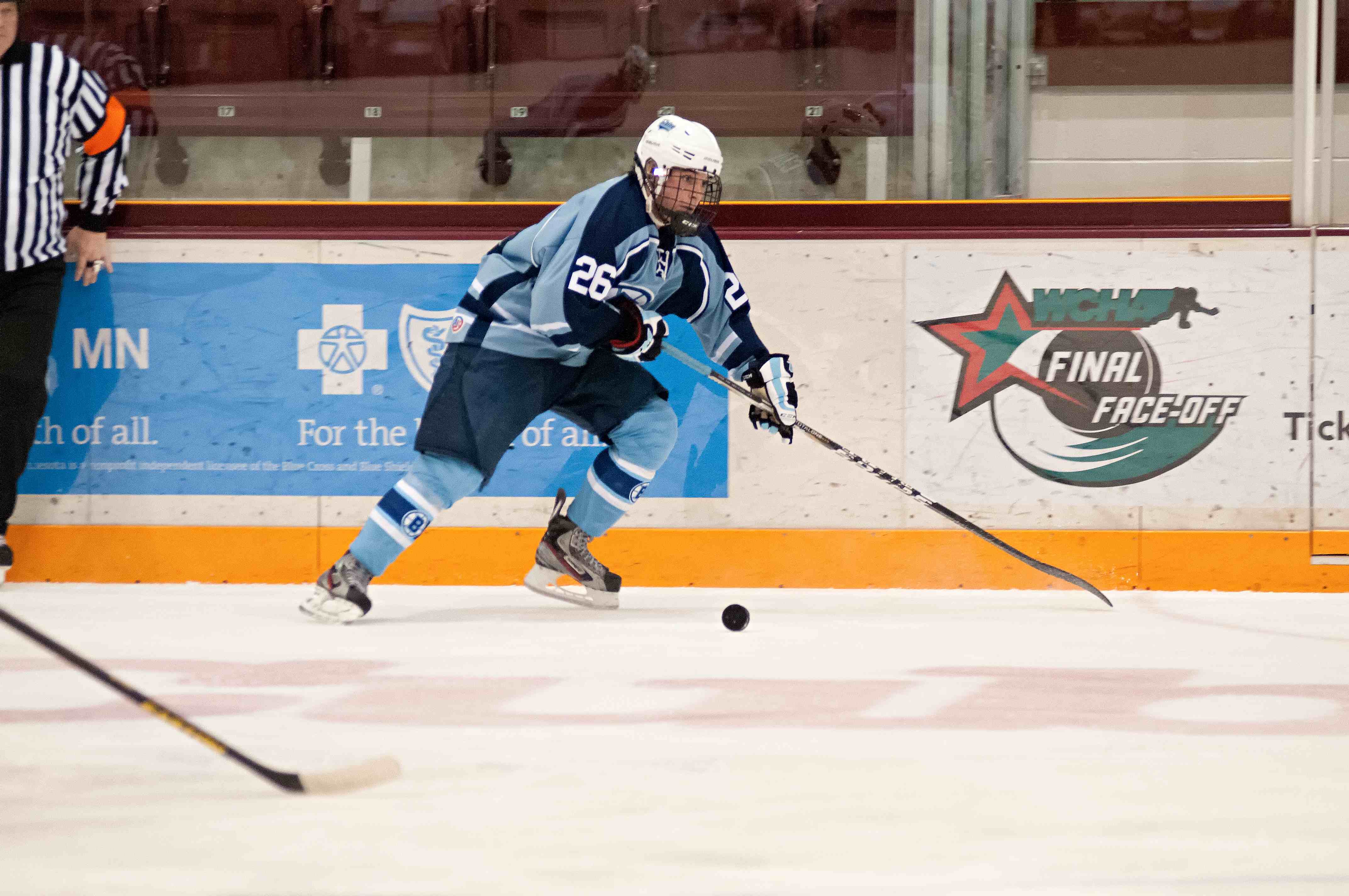 Welcome to another exciting 2013-14 high school hockey season.  Games begin in four days and as will be the custom every week, the MinnesotaHockeyMag.com coverage, led by High School Hockey Editor Pete Waggoner, will post its weekly top ten rankings every Monday morning.   Breakdown USA’s Tim Kolehmainen will provide the Class A rankings every Monday as well.

1.  Blaine Bengals (20-6-1, 16-1-0)  The Bengals return a nucleus of players that are in their senior season and poised to make a legitimate run at the Class AA title this season.  After 6 straight years to the big show, the Bengals have spent the last two on the sidelines and the team that coach Dave Aus says could be his best ever has plenty of skill, physical strength, and the most important element desire is the number one team according to MinnesotaHockeyMag.com. 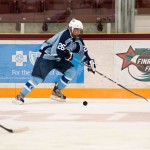 2.  Wayzata Trojans (22-9-0, 3-5-0) Earning the third trip to the state tournament in school history and first since 2004, Pat O’Leary’s young Trojans were in a position to potentially earn their first state hockey title ever last year.  They lost to Hill-Murray in the state AA semi-finals last year.  They bring back a large number of those players this year, 14 to be exact, and had a taste of getting close to their ultimate goal last year.  They are the most experienced returning team in the treacherous Lake Conference and will look to improve on their 3-5 record from last season.  They are always difficult to play against in all three zones and regardless if they are on the Olympic sheet at home or on an NHL regulation size sheet elsewhere, this team does not miss a beat.

Young guns junior Matthew Freytag (22g-15a-37pts) and sophomore Maxwell Zimmer (16g-17a-33pts) matured quickly last year and will bring leadership to the table still, as underclassmen.  Senior Jack Sorenson (5g-22a-27pts) will be key to their success this year as the veteran forward.  Alec Hemenway (1g-12a-13pts) and Chandler Lindstrand (3g-10a-13pts) make up  a defensive corps that is deep and effective. Goalie Jens Vaughan Ahrens (4-1-0, 2.66, .869) will take over the goaltending reigns from the departed Aaron Dingman and there will be little transition and the results should be impressive.

3.  Edina Hornets (25-6-0, 5-3-0) The state champions of the Class AA last year will be buzzing around for a potential 12th state title in combined school history.  While they graduated 10 seniors from last year’s team and said farewell to Buffalo Sabers draft pick Connor Hurley, the Hornets still have a talented and deep roster that head coach Curt Giles will get the most out of like he does every year.  The Hornets lost 11 total players last season including five defensemen.  They will look to a group of players to fill that void, and as is the case at Edina, their defensemen are typically the least of their concerns and with seven straight trips to the Xcel Energy Center in March, an eighth looks very promising.

Tyler Nanne (10g-13-23pts) will bolster the blue line and he looked very good in the Upper Midwest High School Elite League.  Nanne is considered by the editors of the MinnesotaHockeyMag.com high school section to be one of the Mr. Hockey finalists this season.  Ben Foley (0g-5a-5pts) will also return on the blue line for Edina.  Offensively, any team would love to have the likes of Dylan Malmquist (23g-23a-46pts), Cullen Munson (9g-13a-22pts), and Miguel Fidler (8g-7a-15pts)  to rely on to lead the team.  They also have a group of quality players that will contribute from the Bantam AA state championship team last season.  Goalie Andrew Rohkohl (6-2-0, 2.20, .900) will be the go-to guy in goal and he was sturdy in the net for Edina in a key stretch last season.  That experience will help him be a key to the team this season.  Once again, the trip to St. Paul in the Section 2AA goes through Edina.

4.  Hill-Murray (27-3-1, 12-1-0)  The Pioneers have been the East Side’s version of Edina in consistency when it comes to State Tournament appearances and success.  Head coach Bill Lechner churns out the high caliber teams year after year and with 401 wins has the results to back his coaching, the talent he has, and how he maximizes it every season.  The Pioneers will feel the preseason departure of Willie Brown (12g-27a-39pts) , but return three of their top six point producers from last year and most have been in the state finals two straight seasons and crave more than back-to-back runner up finishes

Mitch Slattery (25g-33a-58pts), Josh French (14g-17a-31pts), and Tyler Funk (11g-16a-27pts) represent a core group of offensive talent that return this year.  Big things are expected from Joey Anderson (9g-12a-21pts) who produced a 20 plus point effort as an eighth grader last season.  Jacob Olson (3g-5a-8pts), Davis Zarembinski (4g-6a-10pts) and Logan Sharp (2g-8a-10pts) are tough defensively and have a firm grasp on Lechner’s system which includes a dependency on his defensemen to move the puck.

Despite losing 14 players to graduation, the club returns blue chip offensive force Tommy Novak (28g-28a-57pts) for what will prove to be an entertaining season.  His go-to guy will be Christiano Versich (14g-24a-38pts) who plays a big game and is a player with vision and play making ability.  Alec Bretzman (12g-11a-23pts) had a productive season as did Peter Tufto (5g-17a-22pts).  All four returning players a juniors and they will rely on another junior Seamus Donohue (0g-8a-8pts) to provide leadership from the blue line.  He will have help with the returning Zach Weier (1g-4a-5pts) as well.  Saying goodbye to goaltending legend David Zevnik who graduated will be tough.  A trio of goaltenders from the JV team will be called upon to get the job done this year.

6.  Benilde St. Margaret’s Red Knights (22-6-0) The Red Knights bring back a team that will be a little different from the years past.  No longer will high school hockey fans see the likes of Grant Besse, T. J. Moore or Dan Labosky patrolling the St. Louis Park Rec Center.  Those three represent 198pts from last season that is not back.  Because of that, the offensive output will be on other players this year and the MinnesotaHockeyMag.com is taking a wait and see approach with the Red Knights, a potential top 5 team in the end. 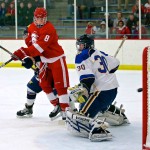 A pair of Mr. Hockey candidates in forward Spencer Naas (37g-33a-70pts) and defenseman Johnny Austin (4g-29a-33pts) will guide the team on and off the ice.  Naas put up massive numbers with a tough independent schedule as a junior.  Another senior that will be critical to their success is Zach Hale (2g-7a-9pts) who had an impressive Upper Midwest High School Elite League season and is a talented player that pays attention to the details of the game.  Transfer Carter Roo (19g-33a-52pts) from Totino Grace will be key in the offensive push for the Red Knights.  Defenseman Ben Newhouse (2g-20a-22pts) is a slick puck moving defenseman who defends and transitions in the Red Knight system well.

7.  Elk River Elks (16-11-0, 13-4-0) There are not a lot of holes in coach Gordy Roberts hockey team this year.  Just five players have graduated from last year’s team and 10 of their top 12 point producers returned this year.  They are the favorite from the MHM to land in St. Paul from the Section 7AA this year.

Jake Jaremko (16g-16a-32pts) continues to uphold the steady family tradition at Elk River and is a solid well rounded player that will have a productive season.  Chase Springman (18g-10a-28pts) and Andrew Zerban (13g-9a-22pts) will continue there ascent to a high level of play as they have each year.  The strength of the Elks is on the blue line as 6 players with varsity experience return to the fold led by senior Colton Budreau (0g-6a-6pts).   Goalie MacLean Berglove (15-11-0, 2.59, .895) has his name tossed around as a potential Brimsek award finalist.  Couple his ability in the net with the deep defensive corps, the job for the forwards just got that much easier.  The Elks very well could be holding the Section 7AA trophy at Amsoil Arena later this year.

8.  Roseau Rams (17-9-1, 6-5-0)  This may very well be the Rams turn to book their trip to St. Paul this year.  Certainly, Brainerd, Moorhead, and Buffalo will have something to say about that yet the elements for the Rams are in place to have a big year this year.  Coach Andy Lundbohm enters his 6th season as the skipper of the Rams and his top three players are as good as it gets.

Leading the way offensively is the top two returning scorers for the Rams as Alex Strand (24g-41a-65pts) and Zach Yon (34g-28a-62pts) are prolific and as difficult to play against as anybody.  Defenseman Cole Bjugson (11g-17a-28pts) is a smart and hard working defenseman who along with Yon and Strand can be on a short list of Mr. Hockey finalists.  Goalie Ryan Anderson (15-9-1, 2.49, .906) is a year wiser and ready for what should be a productive senior season.

9.  Eden Prairie Eagles (13-13-1, 4-4-0)  Don’t let the .500 record from last season fool you.  The Eagles have a pair of DI players that will be a factor this season and the Eagles will prove that last year was an aberration.  Head coach Lee Smith is in his 21st season of coaching and is in the shadows of 400 wins which is impressive.  He enters the season with 376, all at Eden Prairie.

Leading the way offensively is Mr. Hockey candidate Steven Spinner (23g-28a-51pts) and he is a difference maker all over the ice.  Spinner has help up front with Michael Graham (8g-11a-19pts) and New Prague transfer Colton Schmidt (8g-9a-17pts).  Another Mr. Hockey candidate can be found on the blue line and the smooth skating, hard shooting, steady puck moving Luc Snuggerud (5g-37a-42pts)  has the ability to impact a game in many ways.  Senior goalie Jake Gerdes (7-4-1, 2.37, .913) will be relied on heavily this year in goal and as a three year player is in position to make a difference.

10.  Burnsville Blaze (17-10-0, 13-4-0) Losing the heart and soul of a team will be a challenge for the Burnsville Blaze who were poised to make a run at the state tournament this season.  The loss of defenseman Teemu Kivihalme (9g-22a-31pts) was already going to smart and the loss of forward Tyler Sheehy (22g-27a-49pts) would be like a kick to the gut.

Still, we have seen this scene play out before.  The returning players and coach rally and other players step up and get the job done.  Coach Janne Kivihalme is in his 8th season behind the bench and has a talented core of players to work with and can certainly play said scene out this year.  Cole Borchardt (15g-29a-44pts) and Brock Boeser (12g-22a-34pts) and Anthony Rickberg (7g-12a-19pts) will provide a legitimate scoring threat every night.  With depth coming from a solid JV team and a quality AA Bantam team, the Blaze will be the mix as always.