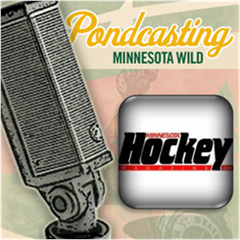 Show two of The Minnesota Hockey Magazine Radio Show aired from the Ice Lodge at the Wild AT&T studio this week.   Fox9’s Jim Rich returned to the show as he discussed college hockey with host Pete Waggoner.  They took a hard look at the potential pitfalls of the newly formed Big-10 hockey conference and how it could impact all of college hockey.

KARE 11’s Dave Schwartz was in studio as he and Waggoner looked at the Minnesota Wild and their recent play.
The duo discussed that the Wild were playing quite well and looked at the positive signs Minnesota has moving forward.

Finally, Upper Midwest High School Elite League Team Northeast coach Chris McAlpine was a part of the show and he previewed the upcoming league-ending tournament.  It was another successful season for the league and his team finished second in the regular season standings.

Join us each week for a new show.