Minnesota Not Missing Out 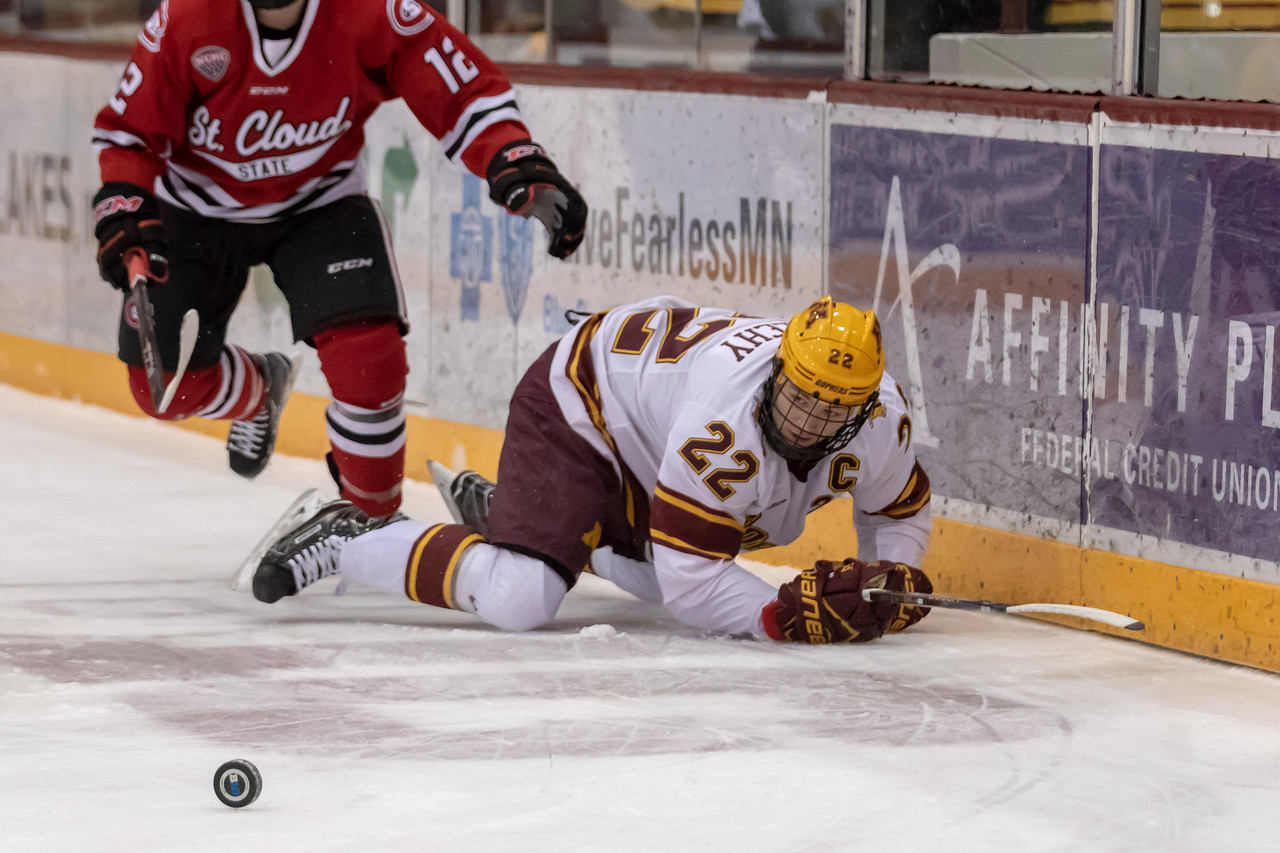 That’s the word University of Minnesota men’s hockey captain Tyler Sheehy used to describe what will likely be remembered in Gopher lore as the 2018 St. Patty’s Day Massacre.

“I can’t remember the odds of what happened happening,” Sheehy said. “But it just kind of unfolded and we were kind of sitting there and our heads just started sinking when that last game was going on.”

What happened was Minnesota was on the verge of making its second straight, and 37th overall NCAA tournament berth official, needing just one of six conference tournament finals to go its way to clinch the coveted spot.

One by one, against all odds as Sheehy said, it happened.

Six games, fittingly concluding with Notre Dame’s 3-2 overtime win over Ohio State in the Big Ten final, conspired to leave the Gophers on the outside looking in. The win by then-coach Don Lucia’s alma mater meant Minnesota finished .001 of a point in the Pairwise rankings (the system used to select the at-large NCAA Tournament teams) behind Minnesota Duluth for the 16th and final NCAA at-large bid.

The Bulldogs made the most of their good fortune by making a historic run to an NCAA title and celebrating it’s Frozen Four win less than eight miles from Mariucci Arena.

“Just one more point here or there could have changed our season,” senior assistant captain Darian Romanko said. “Thinking back to some of the games that we had leads and we blew, we didn’t know that could turn around and bite us. We just need to take every game seriously like it was our last game.”

Within three days, Gopher players witnessed the resignation of Lucia, who had guided the program to two NCAA titles (2003 and 2004) in five Frozen Four appearances, 11 regular-season conference titles, four league playoff titles and a 457-248-73 record in 19 seasons. 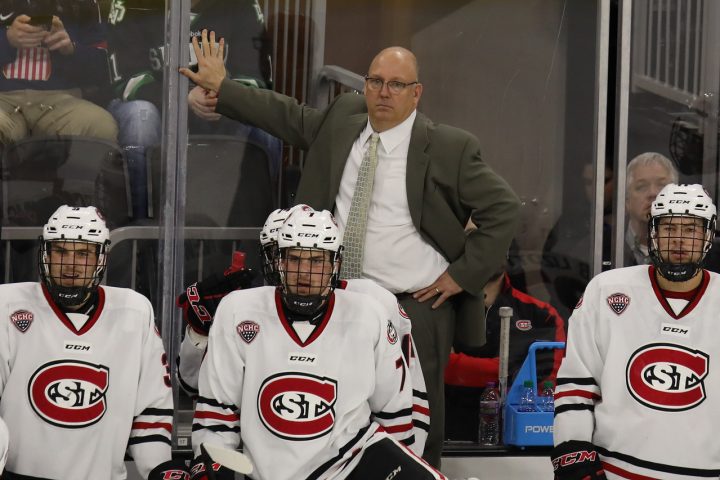 A week later, they welcomed Bob Motzko as the 15th men’s hockey coach in Gopher history. Motzko, who was an assistant coach under Lucia at Minnesota from 2001 to 2005, had spent the past 13 seasons compiling a career record of 276-192-49 at St. Cloud State and led the Huskies to NCAA tournament berths in eight of the past eleven seasons, including the 2013 Frozen Four.

A 1987 graduate of St. Cloud State, Motzko served as an assistant under Herb Brooks at his alma mater for Brooks’ one season behind the Huskies’ bench. The Austin, Minn. native takes over a Gopher program led exclusively by Minnesotans since Moose Jaw, Saskatchewan’s Glen Sonmor resigned eight games into the 1971-72 season to take over the World Hockey Association’s Minnesota Fighting Saints.

“How fortunate do I feel at this stage that I’ve gotten to be an assistant coach at two of the (state’s D-I) programs and a head coach at two of the programs?” Motzko asked, rhetorically. “Somehow the footprints that I followed have led me right back to the same program where a coach like Herb Brooks and Doug Woog and Don Lucia … it’s pretty humbling, I can tell you that.”

Motzko brought assistant, and St. Cloud State alum, Garrett Raboin with him from St. Cloud and filled out his staff days before the season opener at Duluth by adding former Gopher Ben Gordon to the mix. In addition, two more former Gophers, Stu Bickel and Ryan Potulny, came aboard as undergraduate assistants for the 2018-19 season as they complete their degrees at the University of Minnesota.

“The experience of our alumni is one of our program’s greatest strengths,” Motzko said. “All three of these guys know what it means to be part of this program and what it takes in order to be successful here.”

Like with any coaching change, the challenge early on for both coaches and players is to get familiar with one another and be on the same page.

“You’ve kind of got two camps,” Motzko said. “You’ve got coaches getting to know players and players getting to know coaches and it’s that feeling out period with the limited time that we have on the ice right now.

“I’m not real familiar with a lot of the players; we were in two different conferences, though we did play the last couple years.”

From a player perspective, Sheehy says the feeling out period has gone pretty well.

“Anytime you get together with a new group or a new coaching staff it’s a little different,” Sheehy said. “They’ve taken the time to get to know us this past summer and then, obviously, got to see us on the ice here a little bit so far. Just getting to know their system, getting to know what they like to see and what they want us to do out there.”

Sheehy enters his senior season with 108 career points (44 goals, 64 assists) which ties him for second among active NCAA skaters. He and fellow captain Brent Gates Jr. lead an experienced group of forwards which includes six seniors among eight upperclassmen overall.

Motzko singled out Sheehy and junior Rem Pitlick as players who “really jumped out of the blocks” early on in terms of leadership and effort in preseason practices.

“You follow it up with Brent Gates and Scott Reedy and (Brannon) McManus, guys that are excited right now to take on bigger roles on the team and they’re really showing that,” Motzko said. “And then you’ve got the two workhorses in Romanko and (fellow assist captain Jack) Ramsey who bring that work ethic every day and that’s something that I think is starting to bleed into our team right now.”

Youth is not an issue for Minnesota in goal either as Motzko inherits a senior in Eric Schierhorn (12-12-1, 2.69 GAA, .901 save percentage) who started Minnesota’s first 20 games a year ago and enters the season with 101 NCAA games under his belt. Also returning is Junior Mat Robson (7-5-1, 2.11 GAA, .933 save percentage), who emerged as the team’s No. 1 goalie in the second half of his sophomore year when he started 14 of the Gophers’ final 19 games. 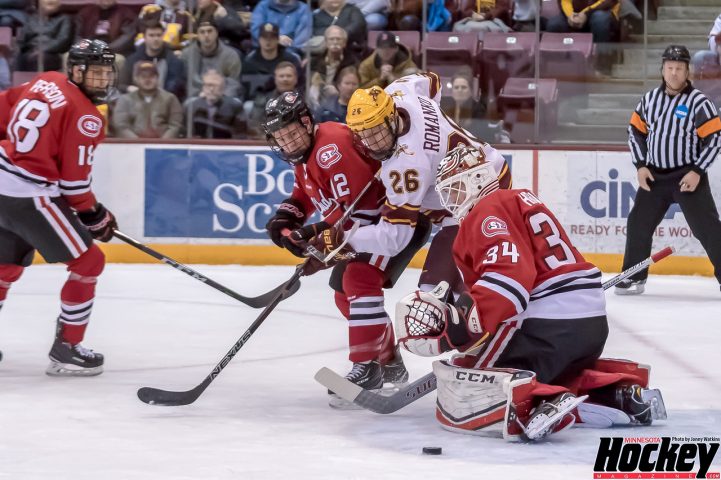 The blue line is a different story with five underclassmen combining for 25 games of D-I experience among eight defensemen overall. Lone senior Jack Sadek and juniors Ryan Zuhlsdorf and Tyler Nanne combined for six goals and 28 points among them a year ago and will be tasked with mentoring freshmen Robbie Stucker, Ben Brinkman and Matt Denman.

Romanko stressed that the forwards must share the load when it comes to getting the young defensive corps acclimated to Big Ten hockey, particularly in the defensive zone.

“We need to be stronger in our systems, especially on the back end,” Romanko said. “Centers will have an important role. Everyone will have to help out in the defensive zone and just try and help the younger guys.”

“This freshman class has just got great energy,” Motzko raved. “They don’t know anything from the past; they come in wide-eyed. (Forwards) Sammy Walker and Sampo Ranta really are off to a great start right now.”

It will be up to Minnesota’s seniors to impress upon its rookies the urgency with which they need to play on a nightly basis. With the Big Ten sending three teams Notre Dame, Ohio State and Michigan) to the 2018 Frozen Four, there’s no such thing as a throwaway game.

As Sheehy says, “You can tell when the Pairwise comes down to it at the end of the year, every game is extremely important.”