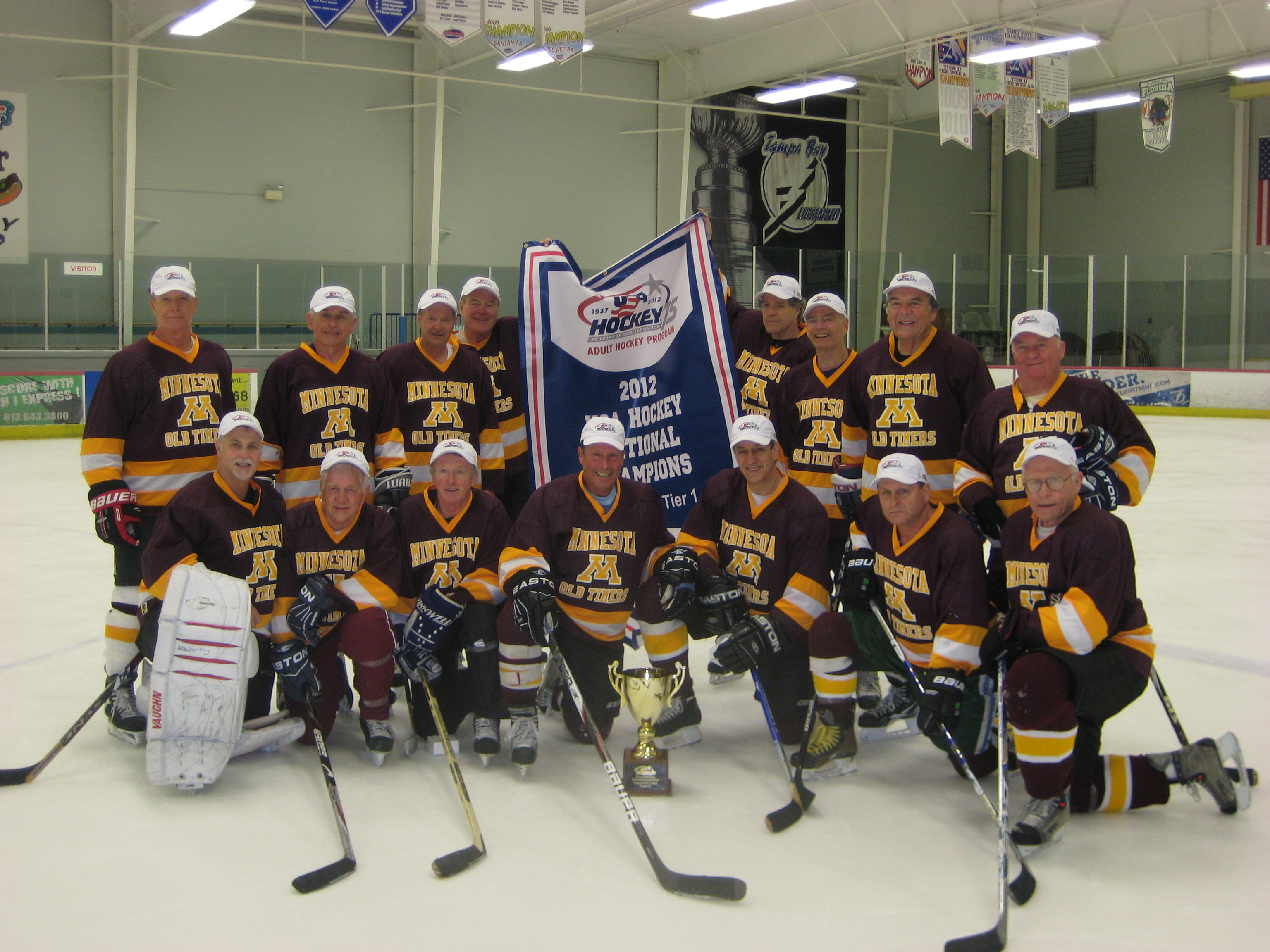 Team’s move from 60+ division establishes them as future favorites.

The Minnesota Old Timers, regardless of the age group they play in, just keep rolling.

The team members, most from the Twin Cities area, are made up of a core group of 15-20 players with varied hockey backgrounds. Many have played at the college/university level and some at higher levels. They compete in several local and national tournaments each year and each team is slightly different based on the player’s availability.

One major tournament they have always looked forward to since first attending in 2007, is the USA Hockey sponsored National Adult Tournament. The tournament hosts several age divisions and sub-divisions depending on the number and profiles of the teams that sign up. It is held just south of Tampa, Florida, in Brandon, in the April time frame.

Where Did It All Start?

I had a chance to talk with player/coach and general manager Jim Westby, a former Minnesota Gopher and USA National player who scored the famous Minnesota High School Hockey tournament winning goal for South High vs Thief River Falls in 11 overtimes back in 1955, about the team’s history and success.

Westby says it started as far back as 1987 when a group from the Twin Cities started playing in the California Charles Schultz Snoopy tournament. The team, then called Minnesota Madness, played for 12 consecutive years in that tournament. They still go back every now and then, but a spin-off team now travels as the Minnesota Old Timers to many other tournaments. This all began in 2002 when they first traveled to Lake Placid, NY, to play in the US Senior Olympics tournament. Governor Wendell Anderson was on that first 60+ team.

Since that first tournament they have played in no less than 30 tournaments in 9 different cities in the US and Canada. The list includes Lake Placid (NY), Buffalo (NY), Tampa (FL), Santa Rosa (CA), Laurel (MD), Vancouver Island (BC), Danbury (CT), Providence (RI), Blaine (MN)…and perhaps one or two more. Their success rate is pretty impressive. They may drop a game here and there, but rarely lose the top prize.

Coach Westby attributes their success to the hockey culture and environment in Minnesota. Most players started playing at a young age, have continued to play after high school or college in senior leagues and still play today 3 or more times per week. There is also a plenty of ice time to be had with over 200+ indoor rinks in Minnesota, dozens just in the Twin Cities. They travel with a full contingent of players, usually 3 lines and 5 defensemen. Other teams outside of Minnesota that play in these tournaments, perhaps with the exception of teams from Michigan, don’t carry enough players and don’t spend as much time on the ice. Westby also notes that the core group has stayed together for years. He believes in loyalty and generally uses the same players for these tournaments if they are available. This creates a lot of good chemistry on the ice and overall a better team.

When they were competing in the 60+ age bracket in 2010, they were often giving up 5-10 years per player as many team members were already over 65 and 70 years of age. They won the 60+ in 2007 and 2008, but ran into the “other” Minnesota team from Roseau in 2009 after the boys “Up North” figured out that playing adult hockey at the national level was great fun. The team from Byfuglien Trucking, organized by player/coach Bob Lund (see related MHM articles), has won the USA Hockey 60+ championship starting in 2009, four years in a row. As you would expect, the players from the two teams know each other very well and have played with and against each other many times.  By the way, Bob Lund plays for Westby’s 65+ Old Timers team as well.

As coach Jim Westby would tell you, they have always tried to compete in “younger” age brackets. But as the group has aged (all will say gracefully…even with new body parts), they decided to move from the 60+ to the 65+ age bracket in 2011 so they could keep competing. They won that first year and were looking forward to repeating.

The 2012 65+ tournament in Brandon, Florida, had a five-team Tier I bracket – only one division. The teams played four games in a round robin and the top two teams played for the championship.

The first three games when went surprisingly well, Minnesota OT’s winning 5-1 against the Illinois Ice Holes, 8-2 against the Wynd Breakers and 7-1 against the Carolina Classics. Team scoring was well-balanced while the team defense was sound.

Game 4, the fourth game in 3 days, burst the bubble as the Rink Rats, also with a record of 3-0 going into the game, turned back perhaps 40-50 shots to outlast the OT’s 4-3 in a real upset win. This placed both teams at 3-1 at the end of pool play. Since the Rink Rats won the head-to-head game, they were seeded first and the OT’s second. The championship show-down match was scheduled early the next morning (Sunday) and provided little time to recover with the short turn-around.

With a slow and sluggish start to the championship game, the OT’s fell behind early, 2-0. They finally woke up, but it wasn’t until late in the 2nd period that they were able to tie the score in spite of badly outshooting the Rink Rats. The OT’s finally got their legs in the third period and proved too much for the Rink Rats in the end, logging almost 60 shots on net for the game. With 5 unanswered goals, the Minnesota Old Timers were again the USA Hockey adult 65+ champs, winning soundly 7-2. The traditional USA Hockey white championship hats were passed out and the team retired to the locker room to celebrate…put another championship into the record books. 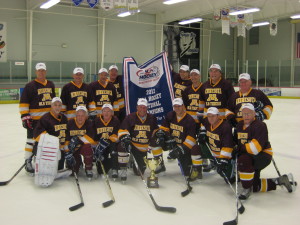 At 70+ years of age, you wonder why Westby and the rest of the 65+ group keep playing. Westby’s first response to the question while laughing is, “So we can drink beer afterward.” Continuing, he admits that competition, on-going physical and mental health, as well as the socializing, is at the root of their passion to continue on. One or two new knees, a new hip here and there, shoulder repairs, etc. can’t keep this group down. Keep the feet moving.

He says that even though it’s less about the hockey now and more about the social aspect of the event, both on and off the ice, it’s nice to win and a lot more fun. Their drive for good competition keeps them coming back for more. They take the travel opportunity, many times with their spouses, to visit new places, meet new people, and take in the local attractions between games and after the tournaments are over.

He ends with, “There’s nothing like sitting around with your friends re-hashing stories from the past and having a cold beer after playing a tough game.” Will they be back in 2013 looking to three-pete? For sure! Road trip anyone?