UMD drops out of top 10 while BSU receives consideration. 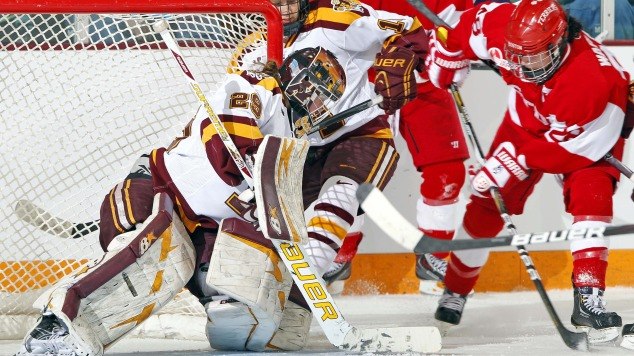 Minnesota junior goaltender Amanda Leveille makes one of her 26 saves in the No. 1 Gophers’ 5-2 win over No. 6 Boston University on Saturday night at Ridder Arena. (Photo / University of Minnesota Athletics)

UMD drops out of top 10 while BSU receives consideration.

The University of Minnesota collected 14 of a possible 15 first-place votes to remain atop the USCHO Division I Women’s Poll released today. The Gophers defeated Penn State 8-0 and Boston University 5-2 over the weekend to strengthen their grip on No. 1 after receiving 12 first-place votes in the Sept. 22 preseason poll.

The lone vote Minnesota did not receive went to fellow WCHA rival Wisconsin which swept Minnesota-Duluth on the road 4-1 and 6-2. The previously No. 10 Bulldogs fell out of the top 10 but did receive a pair of votes.

Although they did not crack the top 10, the 4-0-0 Bemidji State is conspicuous by its presence with eight votes in the poll to trail only Northeastern (14) among teams also receiving votes. The Beavers opened their home schedule this past weekend with a pair of 4-0 wins over RPI and Vermont at the Sanford Center.