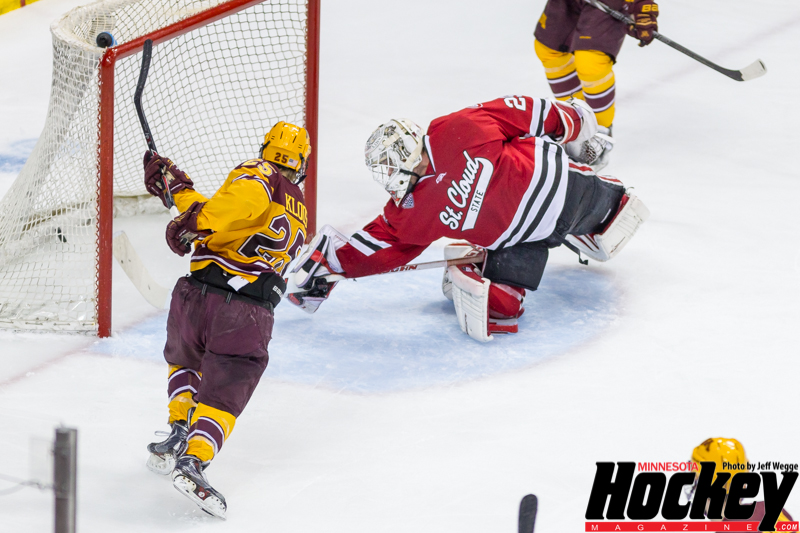 SAINT PAUL — The fourth and final spot in the 2014 NCAA Frozen Four was decided in St. Paul on Sunday night and the University of Minnesota punched its ticket to its second trip in three seasons—and 21st overall—in Philadelphia with a dominant 4-0 victory over St. Cloud State in front of 8,893 at Xcel Energy Center.

The Gophers will faceoff against North Dakota on Thursday, April 10, at Philadelphia’s Wells Fargo Center at 7:30 p.m.

The tournament’s Most Outstanding Player, Justin Kloos, scored twice with Seth Ambroz and Kyle Rau adding a goal apiece. Nate Condon and Travis Boyd, meanwhile, each chipped in a pair of assists.

The NCAA West Region final victory in the first-ever NCAA tournament meeting between the two former WCHA rivals raises No. 1 Minnesota record to 54-28-12 all-time against No. 8 St. Cloud State and gives coach Don Lucia win No. 650 of his career.

“Going to the Frozen Four never gets old; it is a thrill,” Lucia said. “I’ve been to a handful now but for the guys that haven’t been there before to go through the heartache that we did last year with losing in overtime (to Yale in the region semifinal) to be able to come back this year and get back to Philadelphia is a real credit to our group of guys.”

The Huskies (22-11-5) were coming off of an emotionally and physically draining overtime win over Notre Dame, which ended close to midnight on Saturday, and found it difficult to bounce back against a Minnesota team which attacked in waves.

“We ran out of a little steam but you have to tip your hat to the University of Minnesota,” St. Cloud State Bob Motzko said. “They played an excellent game, they shut a lot of things down, we never got a power play and it was a difficult night for us to get anything going.”

Minnesota (27-6-6) essentially put the game away in a two-goal second period in which it put on a veritable passing clinic that was best exemplified by a pretty passing play by Condon, Taylor Cammarata and Justin Kloos to make it 3-0 at 9:53.

Cammarata and Condon worked a give-and-go as they entered the St. Cloud State zone before Cammarata’s pass from the right circle hit the tape of a wide open Kloos at the left post. St. Cloud State goaltender Ryan Faragher had no chance as the freshman from Lakeville slammed in his second of the game and 15th of the season.

“We were on an odd man rush and sometimes when they don’t have a strong gap you’re able to make prettier plays like that,” Kloos said. “I’ve got to give it to my linemates, all I had to do was tap it in.”

If you missed it here’s a .GIF of the play courtesy of C.J. Fogler (@cjzero on Twitter).

Faragher, who made 39 saves in Saturday’s overtime win, was pulled from the game 4:47 later to finish with 12 saves on 15 shots, although he could hardly be faulted on any of the goals allowed. He was replaced by Kloos’ former Lakeville teammate, Charlie Lindgren, who stopped 19 of the 20 shots he faced the rest of the way.

In contrast, Minnesota goaltender Adam Wilcox came up big when called upon in making 24 saves to earn his fourth shutout of the season. The Gophers outshot the Huskies 35-24 for the game.

“Our team just played lights out this whole weekend,” Wilcox said. “The first game the team played great defensively and I had to work on my rebounds a little bit, and I thought I did that tonight. It was an overall effort from everyone.”

“They got the puck deep and finished their checks and just kind of wore us down a little bit,” Gravel said.  “You’ve got to give them credit, they came to play tonight and they took it to us at times. But it’s tough right now.”

The Gophers are undefeated this season (17-0-5) when scoring the first goal so when Minnesota opened the scoring at 11:09 of the first period on Kloos’ first of the game it was a good sign for the maroon and gold.

Justin Holl’s blast from the right point caught a piece of Condon’s stick but never made it to Faragher. Kloos picked up the loose puck near the right post, carried it behind the net and banked his wraparound attempt in off the skate of Huskies’ forward Brooks Bertsch.

Condon’s assists gave the senior captain four points on the weekend (2-2–4) and his performance drew the praise of his coach.

“The way Nate played this weekend elevated our team,” Lucia said. “Nate’s one of those guys where you can’t win without Nate Condons on your team.”

Minnesota doubled its lead 3:48 into the second when Boyd won a tough battle along the left wing boards before sending a cross-ice pass to Jake Parenteau whose one-timer was stopped by Faragher. But the rebound caromed right to Ambroz who tapped in his 14th of the year.

Boyd’s assist on the play gives him one assist in each of the last six games. The six-game point streak is a career high for the junior while his 30 points, nine goals and 21 assists this season are all career highs.

Lucia said the performance of the Ambroz, Boyd and Tom Serratore line was the best he’d seen out of the trio recently.

“They had an important matchup with [Kalle] Kossila and [Jonny] Brodzinski and then [St. Cloud State] moved [Joey] Benik up there after the first period so it was three really good offensive players,” Lucia said. “All three of them are good penalty killers, they play the game the right way and they’re heart and soul type players.”

In fact, all four of Minnesota’s goals were scored within 10 feet of the crease which—after the Gophers managed just one goal in losing to Ohio State in the Big Ten tournament—was no accident according to Lucia.

“That was a point of emphasis after last weekend when we only scored the one goal,” Lucia said. “We had drills to get to get to the hard areas of the ice in front of the net. This time of year it’s amazing how pucks go off somebody.”

The 2014 NCAA Tournament West Region All-Tournament team, as voted by the media: