With bullseyes in place, Minnesota State hopes to exceed expectations 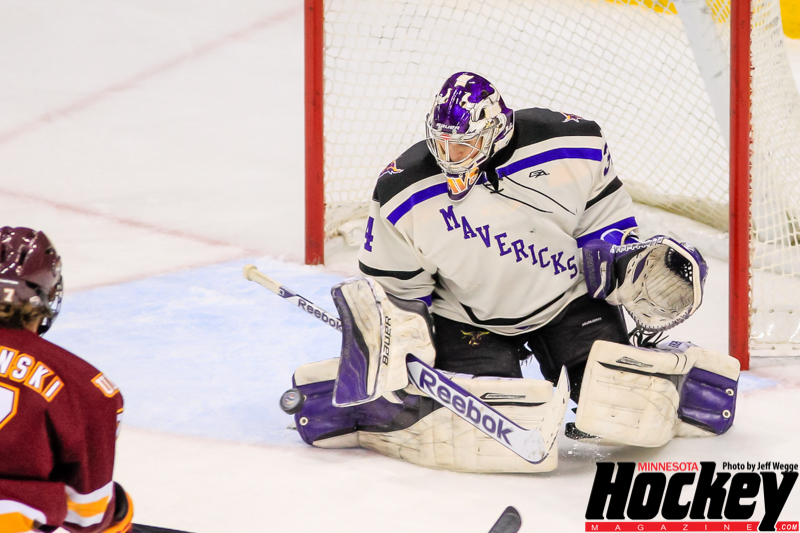 Minnesota State goaltender Cole Huggins’ numbers were among the best in the country as a freshman in 2013-14. (MHM Photo / Jeff Wegge)

With bullseyes in place, Minnesota State hopes to exceed expectations

Entering his third year at Minnesota State, coach Mike Hastings understands the target on the backs of the Mavericks has never been bigger.

That’s what happens when you finish second in the Western Collegiate Hockey Association during the regular season, win your first-ever Broadmoor Trophy and go 3-0 against MacNaughton Cup champion Ferris State, including a win over the Bulldogs in the championship game of the Final Five.

Minnesota State begins the 2014-15 season as the preseason favorites once again the WCHA, ranked No. 13 in both national polls (and as high as eighth in another). But all the accolades won’t mean much when the Mavericks kick off their season for real Friday night with a non-conference series against old friends Dean Blais, Troy Jutting and Nebraska-Omaha.

“That bullseye gets bigger on Fridays and Saturdays no matter who you are playing,” Hastings said. “Obviously, we take that bullseye with a lot of respect. We appreciate it. But it doesn’t spot us a goal and it doesn’t get us a win.”

Despite a second-place finish in the regular season in 2013-14, the Mavericks were not a shoe-in for their second straight national tournament until they won the Final Five, earning the league’s automatic berth. MSU needed every win of their 12-0-1 stretch between Feb. 1 and Mar. 22 just to make the NCAAs.

It was the second time in as many seasons under Hastings that MSU sputtered at the start. But with schools like Minnesota, Wisconsin and North Dakota off to new conferences last season, MSU had fewer chances to raise their Pairwise Ranking into at-large territory, meaning the Mavericks were forced to raise it with quantity instead of quality. MSU’s 26 victories a year ago were the most in the school’s Division I era, which began in 1999 and the most since 1985-86 when they won 26 games as a Division III team.

“In the first two years I’ve been here, we’ve come out of the gate pretty slow,” Hastings said. “We’re hoping to use some of the experiences we’ve had with these young men and try to get out of the gates a little better than we have.”

But the Mavericks can’t afford another slow start this season — not with critical non-conference games against UNO and Minnesota Duluth that will loom quite large in the Pairwise come February and March.

“Even though we had that string at the end of the year, up until our last game against Ferris State, there really were no guarantees that we were going to get to the NCAA Tournament,” Hastings said. 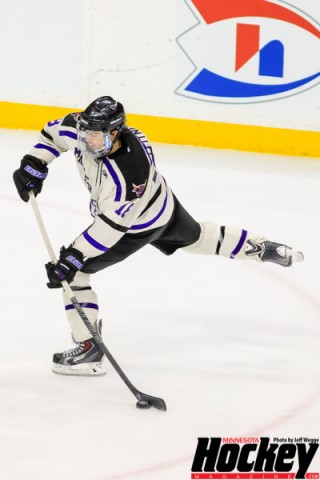 Hastings said he’s excited about the numbers — both literally and figuratively — his senior class will provide this season.

The Mavericks return one of the best duos in the country in Matt Leitner and Jean-Paul Lafontaine. Leitner overcame a slow start to post 45 points a year ago.

“Hopefully Matt can have a better start than he did a year ago,” Hastings said. “Maybe just pick up where he left off because I thought he was playing his best hockey at the most important time.”

Lafontaine was red-hot through the middle part of the season, scoring 20 goals and 40 points — both career highs — despite assisting on only two goals over the final nine games of the season.

Both have already eclipsed the 100-point plateau for their careers, and if they find some consistency, could score another 50 apiece this season.

“We’re going to lean on those guys coming into this year, right from the get go,” Hastings said.

Chase Grant, a team captain, has never been able to build on a promising freshman season in which he scored eight goals and 20 points in 2010-11.

Max Gaede, a Woodbury native, is one of five NHL draft picks on MSU’s roster but has never developed the scoring touch many thought he would when he left high school. He’s an invaluable member of the Mavericks’ fourth line, where he plays a gritty, no-nonsense style.

Defensively, Zach Palmquist and Brett Stern are both captains with a ton of experience. Palmquist has skated in 120 games in his first three years in Mankato and is one of college hockey’s most gifted offensive-defensemen. Minutes played isn’t a statistic in college, but if it were, Palmquist would often be in Ryan Suter territory.

Stern is his perfect complement. Big and strong, Stern excels in the defensive end, and after playing in only 19 games as a freshman, Stern has skated in 72 games the last two years.

“Zach Palmquist has gotten better every year and has taken an enormous step this summer in becoming a better leader,” Hastings said. “Along with Brett Stern and [sophomore] Carter Foguth, that’s three of our four captains back there on the blue line, so I feel good about that.”

The Mavericks will supplement their senior leadership with a number of intriguing sophomores that look to breakout this season.

Zach Stepan quietly scored nine goals and 21 points as a freshman last season and could easily take a big step this season. Michael Huntebrinker was one of MSU’s most effective players down the stretch after joining the fray midseason after an injury cost him the early part of his season. He only scored two goals a year ago, but one of them came in the Final Five championship. He should see an expanded role this season.

Foguth, and fellow defenseman Sean Flanagan were both pleasant surprises a year ago. Flanagan is in the same mold as Palmquist and will see plenty of time on the power play. Foguth is primarily a defensive specialist, but is already an alternate captain.

Cole Huggins will look to build on a strong freshman campaign in goal where he posted a .926 save percentage and 1.88 goals against average, both among the best in the country. Huggins was recently named one of 20 players to the Mike Richter Award watch list. The award is presented to the best goaltender in the country at the end of the season.

“Cole Huggins really came in last year and put together a year that was unexpected,” Hastings said. “Stephon Williams, the year before, had the year that he had, was drafted by the New York lslanders and was coming into his sophomore year hoping to build on his freshman year. He struggled a little bit out of the gate, but thank goodness we had Cole take the ball and run with it from that point forward.”

BEST OF THE REST

Williams returns for his junior season and will likely get the chance to earn back some of the playing time he lost to Huggins. He was the WCHA First Team goaltender and conference Rookie of the Year two seasons ago.

Freshmen forwards Brad McClure and C.J. Franklin have both earned glowing praise for their early approach. McClure and Franklin tied in preseason voting for the league’s Rookie of the Year award in a poll of league media by Shane Frederick of the Mankato Free Press last week.

McClure was one of the best players in the British Columbia Hockey League last season while earning the nickname ‘Captain Clutch’ from his Penticton teammates. He led the Vees in both regular season and playoff scoring last season and capped his two-year junior career with 85 goals and 159 points in 137 games.

Franklin spent the past two years with former North Dakota assistant Cary Eades with the Sioux Falls Stampede in the United States Hockey League, where he led the team with 22 goals and 29 assists in 53 games last year.

“They’re two mature young men,” Hastings said. “They’ve both played in junior programs that, the leagues and the coaching staffs of their programs have done a great job at doing our work. They’ve prepared them.”

Another product of the Penticton program, junior Bryce Gervais, is back and looking to build on a breakout sophomore season. Gervais scored eight goals as a freshman two years ago and followed it up with 16 a year ago. While he likely won’t double his total again, a run at 25 goals isn’t completely out of the question.

Another junior, Teddy Blueger, scored 26 points on 22 assists and could be the beneficiary of some of Gervais’ goal-scoring. Blueger was a second round pick of the Pittsburgh Penguins in the 2012 NHL Draft.

“Those were two guys that made significant impacts in our playoff run and even in the national tournament,” Hastings said. “We look forward to that group giving us a good start.”

Why the Mavericks will exceed expectations: A team loaded with quality forwards, a balanced and experienced group of defensemen as well as two quality goaltenders has played a season now with raised expectations. This isn’t a group that will sneak up on people anymore; but two straight first round losses in the NCAA Tournament have left this group hungry to make history and advance in the tournament for the first time in school history.

Why the Mavericks will fall short of expectations: With non-conference teams Nebraska-Omaha and Minnesota Duluth up first and second this season, followed by winnable games in four of the first six conference games, a slow start would put MSU in a hole they may be unable to dig out of. There’s plenty of talent up front, but if the Mavericks lost any of their top-four defensemen, they’d be forced to give more playing time to others in a group that isn’t nearly as deep.