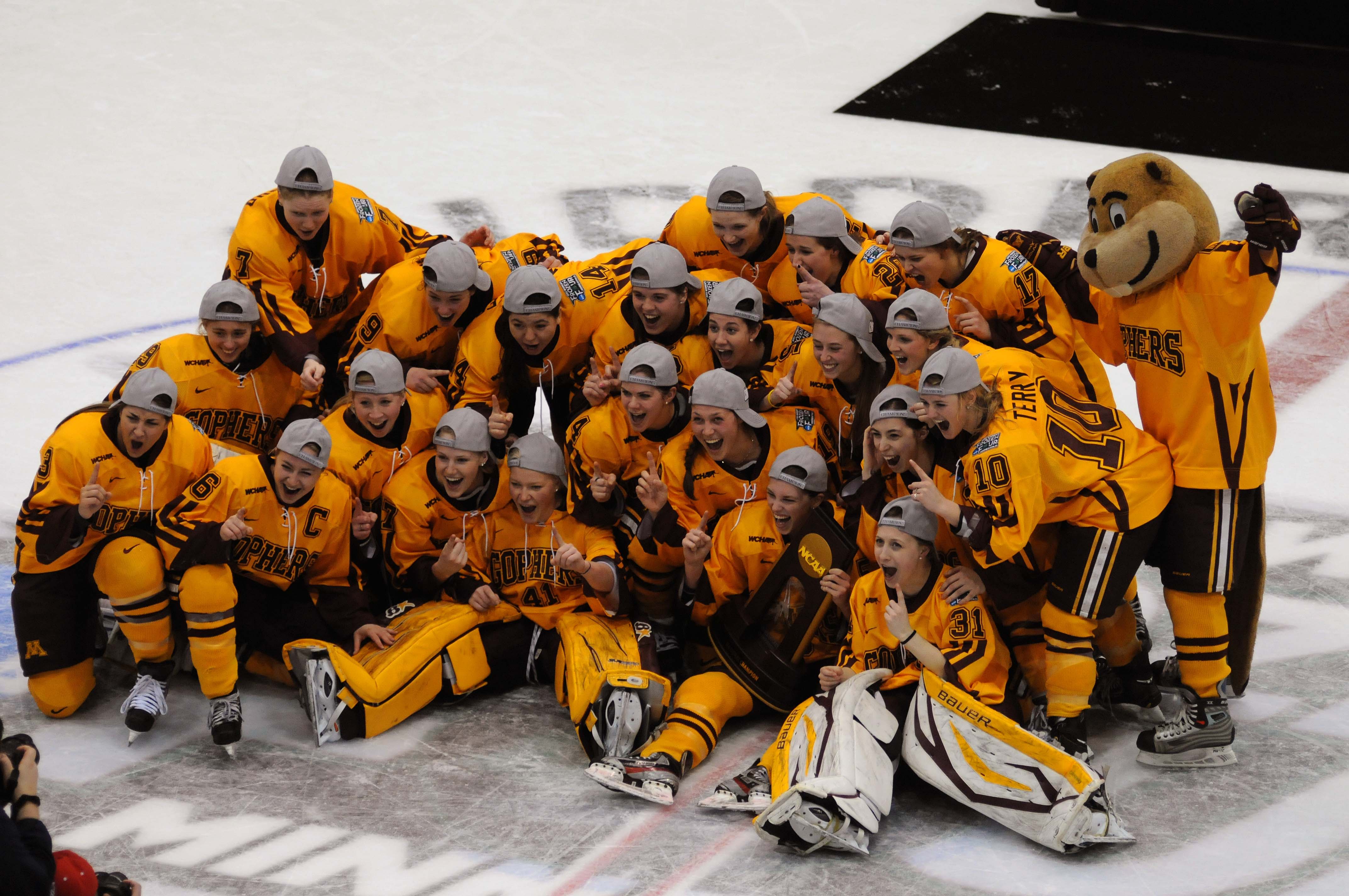 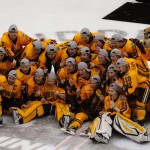 To strive for perfection is admirable, but the notion of achieving it is altogether impractical. Nevertheless, 3400 privileged witnesses at Ridder Arena on Sunday had the good fortune to see it accomplished with their own eyes.

The win gives Minnesota’s its fourth overall—and second consecutive—NCAA title while extending the Gophers’ overall winning streak to 49 games dating back to Feb. 17, 2012. It’s a fitting end to a magical season for the Gophers which included Kessel, goaltender Noora Räty and defenseman Megan Bozek as the top-three finalists for the Patty Kaz Award and coach Brad Frost receiving WCHA and ACHA Division I Women’s Coach of the Year honors.

“I don’t know if you can draw up a better scenario,” Frost said. “To go 41-0, and have the three best players in the country on this team, it’s something I can’t even put into words.”

“Today you saw a record-breaking team play another great hockey game,” Durocher said. “There will obviously be great debate that this is the best women’s college hockey team ever, and they earned what they got—great team. I tip my cap to them.”

Minnesota goaltender Noora Räty finished with 21 saves including a beauty of a save on BU’s Janelle Kohanchuck’s one-timer less than two minutes after Kessel’s goal gave the Gophers a 3-1 lead at 16:02 of the second period. Herself a Patty Kaz Award finalist in 2013, Räty finished 38-0-0 on the season and concluded her career as the NCAA’s all-time leader in wins (114) and shutouts (43).

The four-point night put Kessel, a junior forward from Madison, Wisc., over the century mark in scoring for the season (46-55–101), making her just the fourth player in NCAA history to eclipse 100 points. Kessel joins Harvard’s Jennifer Botterill (2002-03) and fellow Gophers Natalie Darwitz and Krissy Wendell (2004-05) on that prestigious list.

After having to work overtime in each of its first two NCAA tournament games against North Dakota and Boston College, Minnesota built a more comfortable 4-1 lead over the Terriers through two periods. BU’s Marie-Philip Poulin cut the gap to two just 1:48 into the third but the teams traded goals from there culminating with Kessel’s empty-net tally with 49 seconds to play.

Poulin nearly cut the deficit to one near the 15 minute mark but was denied by Räty. Shortly thereafter, Menefee set up Ramsey for a back-door tap in with 4:33 to play.

“The key in the game was to get the lead,” said Kessel. “But it was never safe. When we were ahead 4-2 in the third period, Poulin walks in and Noora made a great save; it could have been 4-3, but instead we went down and made it 5-2.”

Minnesota opened the scoring at 11:38 of the first period when Ramsey fed Mira Jalosu in the left circle and the senior defenseman’s one-timer beat Terrier’s goaltender Kerrin Sperry through her five-hole. The Gophers doubled their lead just under seven minutes later when Sperry directed Kessel’s shorthanded attempt into the right corner where freshman sensation Hannah Brandt corralled the puck and fired it off of Sperry’s skate and in for a 2-0 lead.

Boston University’s Sarah Lefort, however, answered just 16 seconds later by backhanding a rebound of a Shannon Stoneburgh shot behind Räty making it a 2-1 game at the break. But in the middle stanza, Menefee not only set up Kessel’s first goal at 16:02 but also Milica McMillen’s eventual game winning one-time blast with only 11.8 seconds remaining in the period.

The Terriers finished the season 28-6-3 and Durocher was, as would be expected, very proud of his team’s effort against the team by which all great teams to follow will be measured.

“The shot count didn’t get away, and the territorial [advantage] didn’t get away,” Durocher said. “I love everything about our team. They were down 2-0, 3-1, 4-1, and they never quit.”

Räty, Kessel, Brandt, Poulin, McMillen, and Bozek were named to the all-tournament team as Räty garnered Most Outstanding Players honors with 46 saves on the weekend.

When asked if the 2012-13 Gophers are the best women’s college hockey team ever, Räty didn’t dance around the subject.

“It doesn’t matter how you say it, no other team has done this,” Räty said. “So our record speaks for itself to the fact that it is the best season in women’s hockey history.”

How do you argue with perfection?