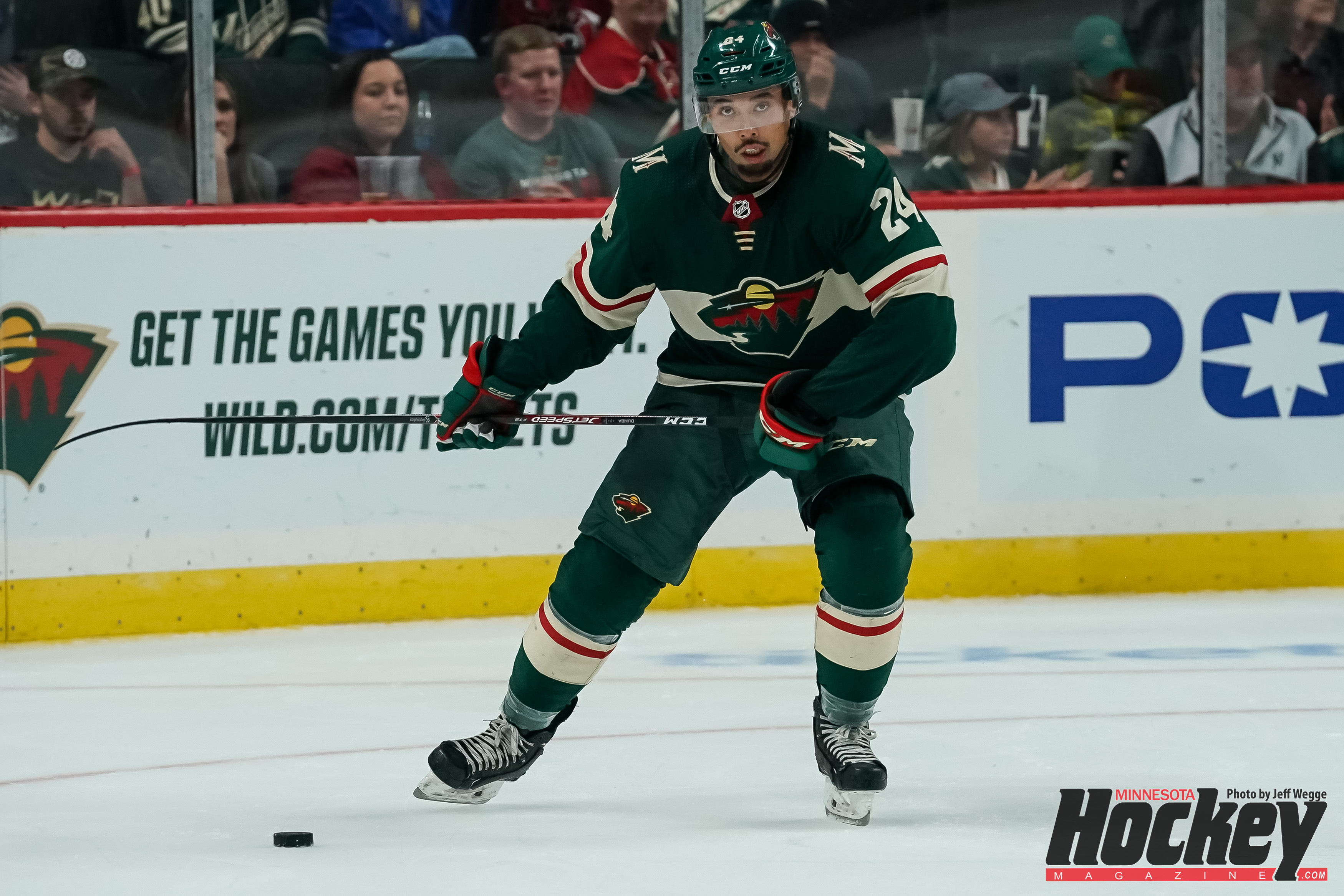 Matt Dumba didn’t notice anything wrong until he felt a throbbing feeling once he settled into the penalty box. 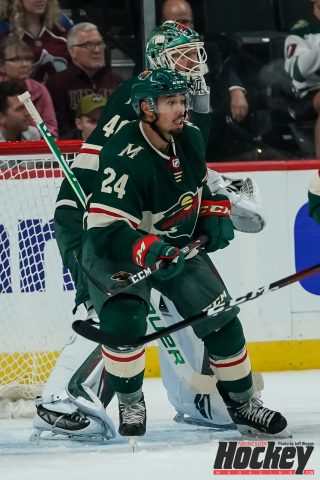 The Wild defenseman is back. He’s talked about how much he missed the game last year, especially considering he hadn’t been sidelined like this before.

“I’ve never been taken that far out of the game for that period of time,” Dumba said, after a Sept. 20 practice. “It was kind of a new experience for me.

“I’m just looking forward to contributing to the squad and trying to get back to where my game was.”

He’s certainly counted down the weeks until the season opener, set for Thursday in Nashville, on his Twitter and Instagram accounts. Dumba has posted brief hype videos marking six, five, four and two weeks until the 2019-20 season begins. He acknowledged it’s a little like a kid waiting for Christmas, counting down with the advent calendar.

Dumba said he’s excited to be back and isn’t taking anything for granted.

At the time of his injury, Dumba led all NHL defensemen in goals with 12, just two short of his career-high mark of 14. Even right after his surgery last winter, he told the media that he thought he’d be able to get back to where he was last season or even surpass that.

Without Dumba, and later without captain Mikko Koivu and a few players who were traded away before the deadline last winter, the Wild finished 37-36-9 for a spot as the Central-Division basement dweller in the Western Conference. The Wild only won 16 home games, with 7 of their 11 shutouts coming on home ice as well. They missed the playoffs for the first time since 2012.

The Wild no doubt missed Dumba’s powerful shot from the blue line. He scored 12 goals and 10 assists in just 32 games last year during his sixth NHL season, all with the Wild. He came off a career year with 14 goals and 50 points in all 82 games during 2017-18.

There’s the physical part of getting injured and the recovery process, of course, but it can also take a mental toll for a player that’s used to playing every single game. He even got bored last spring and posted an April Fool’s joke on teammate Joel Eriksson Ek’s car, plastering it with Post-It notes. (For the record, Eriksson Ek hasn’t retaliated yet, but Dumba said he knows it’s coming.)

All jokes aside, Dumba said that initially he was caught up in getting frustrated with being out before realizing he simply couldn’t dwell on it.

“I’d beat myself up thinking about it every night if I was to go down that road,” Dumba said.

With the recovery following surgery, Dumba said that it wasn’t until August that he felt back to normal where he could “do almost everything that I wanted to.”

Once camp opened, Dumba was back playing with veteran Ryan Suter, just trying “to pick up where we left off,” Dumba said.

Dumba’s presence at training camp this fall was enough for coach Bruce Boudreau, even if the defenseman was still getting back into form early on. 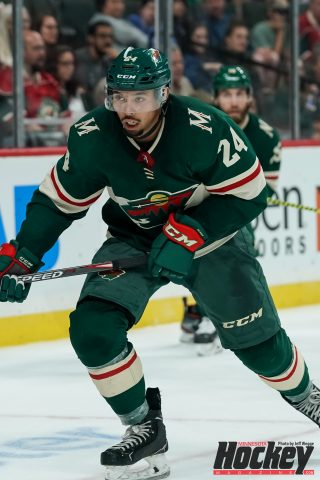 “I think he’s got to rein his shot in a little bit,” Boudreau said after the Sept. 20 practice. “It’s not as accurate as it was, but that’s at the beginning. Let’s get him a few games… to get his timing down.”

It seems as though Dumba got something down so far, enough for a pair of goals and four points in four preseason games. Boudreau acknowledged a couple of days before the season opener that Dumba is fully back to being the player he was last year, also noting his preseason points total in those first few games.

“(Dumba) probably took a few more chances than I’d really like to see him take, but that’s Matt. When he gets going, he’s hard to rein in,” Boudreau said. “But that’s part of his DNA, and that’s part of the reason we love him.”

Dumba makes no secret about what he tries to give to the team and does what’s best for the team, even if it means sometimes getting caught up in that and needing to dial things back a bit, he said.

“But I’d rather tame the tiger than paint stripes on the cat,” Dumba said.

Koivu, who suffered an ACL and meniscus tear in his right knee on Feb. 5 in Buffalo, is also back in the fold and proved in this preseason that his leg is fine, Boudreau said. Both Koivu and Dumba back healthy has already affected the team in camp and the preseason, according to veteran forward Zach Parise.

“It just adds a different dynamic to our roster with those two guys healthy and playing,” Parise said. 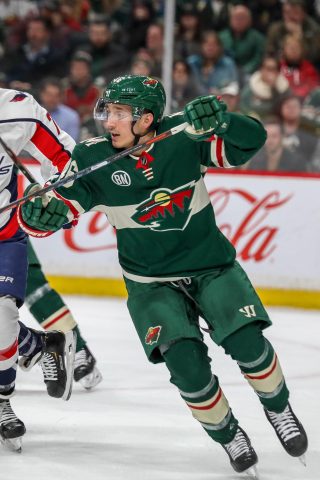 It’s been a good transition with Guerin so far, according to Dumba.

“He definitely wants the best for all of us,” Dumba said. “He wants to instill that winning culture, that attitude. Hearing him talk, I think it excites a lot of people.”

The most notable move was securing defenseman Jared Spurgeon to a 7-year extension at the start of camp. Spurgeon, who will turn 30 at the end of November, is coming off a career year last season with new high marks in goals (14), assists (29) and points (43) while playing all 82 games last year. He also led the team in blocked shots with 145 and averaged 24:09 on the ice. Spurgeon can often fly below the radar as far as his abilities on the ice, but make no mistake that his presence was certainly felt as one of the team’s top defensemen, especially with the absence of Dumba.

The Wild also signed center Joel Eriksson Ek to a two-year deal in August. The 22-year-old scored 7 goals and 14 points in 58 games with the Wild last season.

Just before camp opened in September, the Wild re-signed 23-year-old forward Kevin Fiala to a two-year contract. Fiala came over to the Wild last winter in a trade that sent Mikael Granlund to the Nashville Predators.

One of the bigger signings for the Wild in the offseason, under Fenton’s tenure when free agency opened on July 1, was a 5-year, $30 million deal for veteran winger Mats Zuccarello. He already has 511 career NHL games under his belt with the New York Rangers and Dallas Stars.

Right-winger Ryan Hartman is also added to the mix as a free-agent signing. He’s coming off a year split between the Predators and Philadelphia Flyers. He scored 12 goals and 26 points in 83 games.