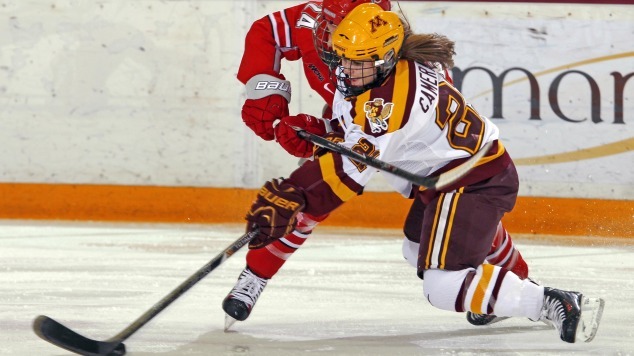 Dani Cameranesi and the Gophers let one get away against the Buckeyes on Friday. (Photo / University of Minnesota Athletics)

MINNEAPOLIS- Friday night had all the markings of a trap game for the University of Minnesota women. It wasn’t, but the end result left the Gophers wanting more than two points in front of 2,340 fans at Ridder Arena.

A week away from traveling to North Dakota and ending the regular season with series against Minnesota-Duluth and Bemidji State, the two-game home series against fifth-place (out of eight teams) Ohio State featured an opponent that had won 6 of the last 8 games and 9-3-1 on the road.

By the end of the game Minnesota head coach Brad Frost’s voice was shot yelling at his players and the officials.

The Buckeyes’ persistence despite missing several early attempts paid off down the stretch in the series opener. Down 3-1 senior forward Taylor Kuehl, a Minnetrista, Minn. native,  scored twice for the Buckeyes Friday night.

Her second goal, tying the game at 3 with 3:16 remaining in regulation, proved to be the difference in a 3-3 tie where Ohio State was out-shot 32-28 yet had a 9-7 advantage in the third period.

“They were a lot more aggressive than teams we have played recently,” said junior forward Hannah Brandt about OSU after snapping a 12-game point streak Friday. “Their forecheck was a lot faster I guess. We just have to be more prepared for it tomorrow.”

Minnesota (23-1-4, 16-1-4-2 WCHA) took the extra league point in the shootout when Brandt, Milicia McMillen and Dani Cameranesi all scored. Junior goaltender Amanda Leveille, who made 25 saves in regulation and forced Claudia Kepler to shoot wide on a first period shorthanded breakaway, stopped Julianna Iafallo with a diving toe save for her second consecutive shootout win.

“When you win the shootout you feel like you’ve kind of won the game. You certainly feel better than when you lose the shootout,” said Frost. “At the same time we gave up a two goal lead there so there’s some hollowness to it as well.”

Both teams wasted no time off Friday with two goals and a major penalty in the opening 3:21.

Meghan Lorence got Minnesota on the board 90 seconds into the game when her rebound shot got past Ohio State goaltender Stacy Danczak. 76 seconds later Danielle Gagne tossed a change-up on OSU’s first shot that hit the crossbar and sat down on the wrong side of the red line for the Gophers.

Gagne’s night lasted less than another minute. The 5’6” senior was sent off for checking from behind, giving the Gophers a chance to re-take the lead.  Minnesota only had one shot on the five minute major, which turned into a 5×3 when Kara Gust was called for checking, but made the most of it. Redshirt sophomore defenseman Lee Stecklein scored her second of the season on a shot from the top of the slot.

Minnesota freshman Cara Piazza took a pass in stride from linemate Brook Garzone 4:33 into the second period and was rewarded with her ninth goal of the season.

“I just hear Cara on my left and she was wide open. So I just passed it over to her,” said Garzone. “It was a great shot. I was screaming so loud for her.”

The lead wasn’t to be, though. Kuehl made it a 3-2 game eight minutes later when her shot on the power play found its way through traffic.

Ohio State had multiple chances before the goal as the Gophers were unable to clear the puck out of the zone.

“We had three chances to clear it and we became part of the power play by making some good passes to their point,” said Frost.

The Gophers killed a 22 second two-man disadvantage early in the third period, turning what could have been a change in momentum with a one-goal lead into one for the home team. Sara Schmitt came close with a shot off the crossbar, but was reviewed and upheld.

Garzone brought the physical play, sticking up for Leveille late with self-described “crazy eyes” and getting in Julia McKinnon’s face when McKinnon shot the puck after a whistle. Kuehl scored during the 4×4. Despite the efforts of Cameranesi in overtime to bury a winner, first-place Minnesota dropped a point in the WCHA standings.

“Definitely not what we were hoping for especially being up. You never want to let a team back into a game like that,” said Brandt. “It was great to get the extra point, but we’re definitely not satisfied with that game and know we have to come out harder tomorrow.”

Still, Frost sees the game against Ohio State as a reminder for his team to play a more consistent, sixty-minute game before tomorrow’s rematch.

“That’s the hope. Certainly Ohio State is a very, very good team. They’re fighting to get in the top-four of our league and they’re flirting with the top-10 of the Pairwise,” Frost said. “It’s just going to continue to ramp up.

“We’re playing some great teams down the stretch and this is a great way to prepare for it.”