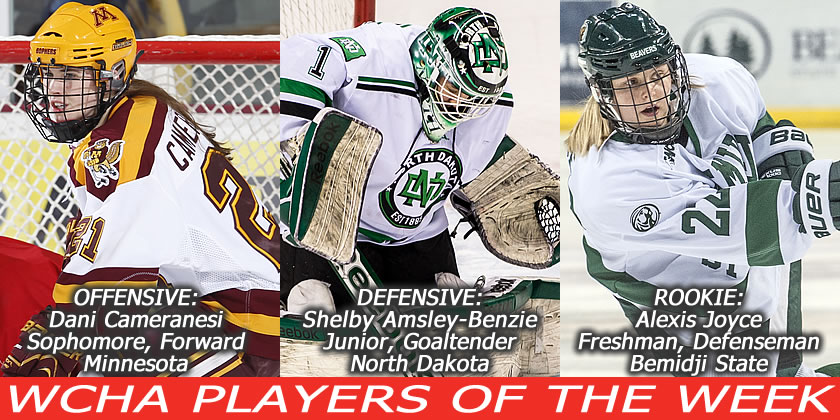 Cameranesi led Minnesota with three points in a home sweep of Minnesota Duluth that clinched the Gophers’ third straight WCHA regular season title. The sophomore from Plymouth, Minn. registered two assists in Friday’s 7-1 win, before scoring the game-winning goal in Saturday’s 2-0, championship-clinching victory. Cameranesi, who has surpassed her freshman year point total, ranks fourth in the nation with 51 points, third with 32 assists and tied for third with six game-winning goals. In WCHA play, she ranks second with 39 points, 15 goals, 24 assists and a +31 on-ice rating in 25 league games.

Amsley-Benzie recorded her second pair of back-to-back shutouts, blanking St. Cloud State by scores of 4-0 and 2-0 for a weekend sweep that vaulted North Dakota into third place in the WCHA standings. The junior from Warroad, Minn. made a total of 38 saves between the two games and helped UND go a perfect nine-for-nine on the penalty kill. Amsley-Benzie, who has set UND’s records for career wins (47), career shutouts (12) and single-season blankings (7), leads the nation with a .953 save percentage this season. Since Jan. 1, she has been even better, pacing all NCAA netminders with a .972 save mark, 0.72 goals against average and six shutouts.

Joyce led Bemidji State with three points as the Beavers pulled within one point of fourth place – and home ice for the WCHA playoffs – following a road sweep at Minnesota State. The freshman from Lakeville, Minn. recorded all of her points Friday, recording a trio of assists to spark a 4-0 Bemidji State victory. She also finished the weekend with a team-best five blocked shots. Joyce leads the Beavers’ freshman class – and all WCHA rookie defensemen – with 16 points on four goals and 12 assists. She also ranks second nationally with 106 blocked shots.