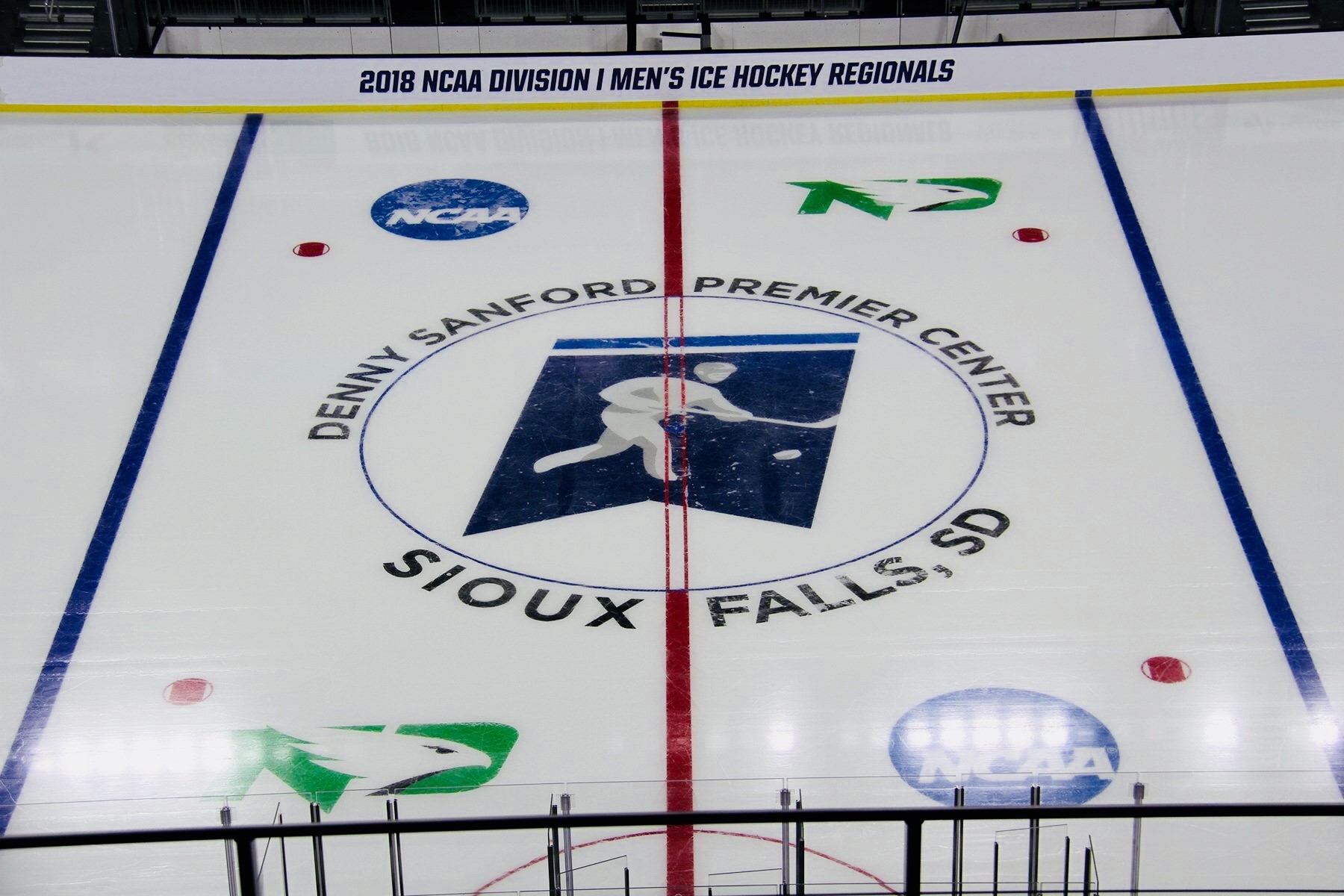 It’s Wednesday evening and the action is starting to pick up for Erik Martinson and the interns helping him get the Denny Sanford Premier Center ready for the ball.

Martinson has been in Sioux Falls since Sunday, nailing down the fine details of a well-run NCAA Regional hockey tournament from hiding all advertisements and signage to converting football and basketball locker rooms to hockey before the teams get there.

“I don’t know how we got three Minnesota teams in one region, but I think it’s awesome,” said Martinson, assistant athletics director for operations at the University of North Dakota.

“I’m glad it all worked out with the PairWise Rankings, because I think we’re going to have a great atmosphere.” 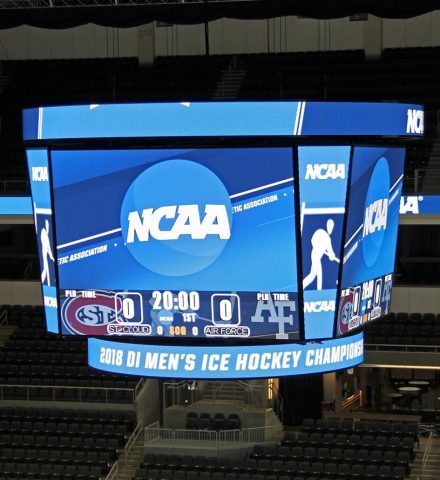 The West Region has a definite Minnesota flavor, with the three Minnesota teams plus Colorado Springs-based Air Force, which has plenty of Minnesota ties with Coleraine-native Frank Serratore behind the bench and seven Minnesota-native players.

“Hopefully there’s more of a positive flavor for the Minnesota teams because of the proximity,” MSU coach Mike Hastings said. “It was nice that we had a 2 1/2 -hour bus ride instead of hopping on a charter and flying like we’ve had to in the past.”

The idea of an arena filled with green-clad North Dakota fans faded as conference championship weekend progressed, but when the NCAA tournament bracket revealed a nice consolation Sunday morning.

“The best outcome would’ve been if UND was here,” Martinson said. “The next-best outcome is what we have with the teams that we got here.”

The NCAA regional rounds have seen notably sparse crowds, especially since the sites were required to be off campus starting around 10 years ago. Hundreds of empty seats are usually visible on TV and thousands more unoccupied in the upper decks, often closed off.

Those in charge at the Denny Sanford Premier Center hope and are confident that won’t be the case this weekend.

“Obviously, North Dakota not making the tournament is going to have an impact,” said Ty Halpin, the on-site NCAA representative in Sioux Falls this weekend.

“But the fan bases are able to drive and I think the game times are conducive to fans coming. Talking to people here, they think a lot of the people who bought tickets thinking North Dakota would be here, will probably still come. Even if it’s not full, it’s still going to be an enthusiastic atmosphere.”

UND showed what an electric atmosphere at a regional can look like with a much smaller, 4,000-seat arena with much of its fan-base willing to pay anything for a ticket when the school hosted at Fargo’s Scheels Arena in 2015 and 2017.

The crowds at those games, around 90 percent Fighting Hawks fans, spilled into the standing-room areas.

“I was down on the ice handing out championship hats to UND players after the region final (at Scheels Arena in 2015),” Martinson said. “It was the loudest noise I’ve ever heard in my life because it’s all the noise is coming at you. Atmosphere drives everything.”

UND’s absence and a larger arena to fill have created challenges when it comes to attendance while trying to match the crazy atmosphere of the Fargo regionals. 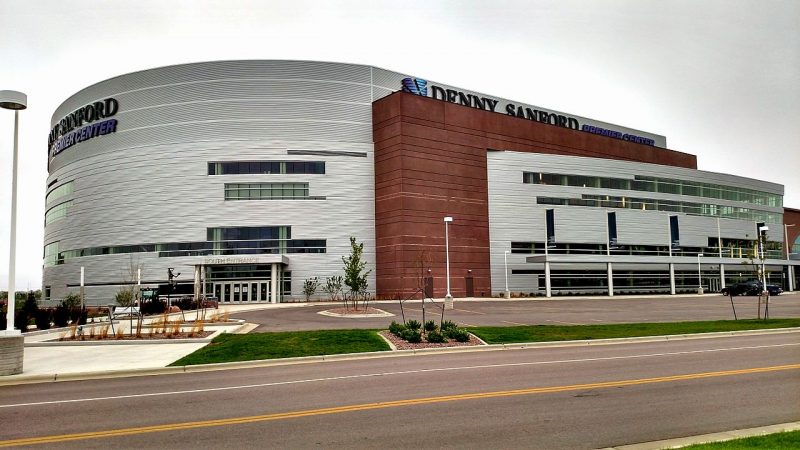 The Denny Sanford Premier Center – with a capacity of 10,678 – is home to the United States Hockey League’s Sioux Falls Stampede, an indoor football team and live concerts. The arena is the only one out of 16 in the USHL that seats more than 10,000.

No. 1 in the PairWise Rankings, St. Cloud State was the easy pick for the top seed in the West Region since the selection committee tries to reward top seeds with shorter travel. To maximize attendance, the committee had to do some flip-flopping.

MSU, ranked sixth in the PWR, was slotted to play Midwest Regional host No. 11 Penn State in Allentown, Penn. and No. 12 Minnesota-Duluth would’ve played No. 5 Denver out east in a natural bracket.

Good news for those who value bigger crowds and better atmosphere more than bracket integrity.

“You never know what’s going to happen once the 16 teams are determined,” Hastings said. “I’ve never really tried to figure out who we’re going to play. The important thing is to focus on getting in and progressing from there.”

A large chunk of tickets were gobbled up more than 5,000 on presale by UND fans, who assumed their team would play in Sioux Falls this weekend, and it’s hard to blame them, given their program’s 15-year streak of tournament appearances.

(A host team is automatically placed in the region it’s hosting as long as it qualifies for the tournament.)

Each team that qualifies for the tournament is allotted 400 tickets, typically offered first to their season-ticket holders and Halpin estimated 1,000 tickets were sold via the NCAA’s official ticket exchange.

Fans that do make the trip to Sioux Falls will be impressed when they walk through the four-year-old Denny Sanford Premier Center’s doors, according to Halpin. He said he was impressed by the “four adequate locker rooms” and the sightlines provided by a steep upper deck that makes the fan feel closer to the ice.

“It’s phenomenal and it’s still pretty new,” Halpin said. “They’ve dressed it up pretty well from an NCAA perspective and it has all the bells and whistles you can ask for.”