A smattering of college hockey news from around the state. 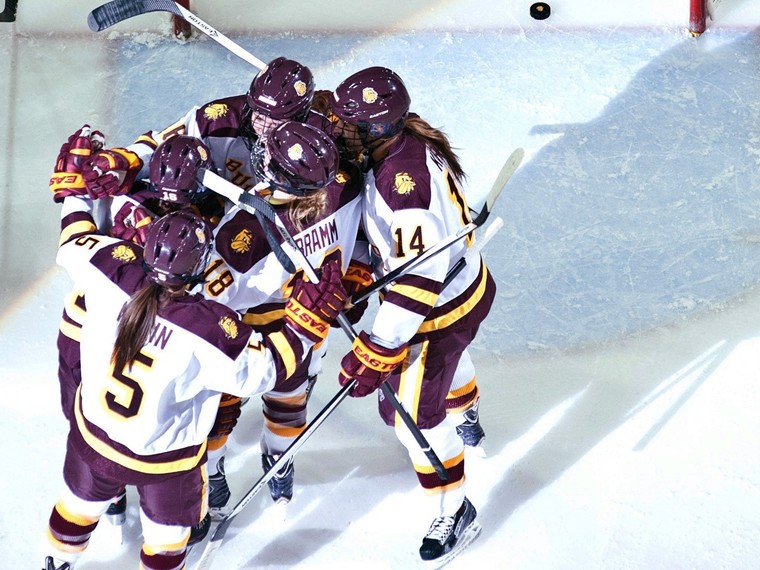 A smattering of college hockey news from around the state.

The University of Minnesota Duluth women’s hockey team is celebrating the International Ice Hockey Federation’s 2014 World Girls’ Ice Hockey Weekend in a special way.  The Bulldogs are hosting a free hockey skills clinic for all girls ages 7-12 at the AMSOIL Arena ice before their game against the Minnesota Gophers on Saturday, October 11. The clinic will be led by two-time Olympic gold medalist and Bulldog assistant coach, Gina Kingsbury.

Clinic is limited to the first 40 registered girls and pre-registration is required. Visit whockey.umdbulldogsportcamps.com to register.

All clinic participants and girls hockey players will receive a free ticket to attend the Bulldogs’ games against the Minnesota Gophers on October 10 & 11 at AMSOIL Arena.

The first St. Cloud State University Huskies Hockey Caravan will be getting on the bus and hitting the road on Tuesday, Sept. 23.  The caravan will be making stops at ice arenas in Willmar, Monticello, Alexandria and Little Falls.  The caravan will provide local fans in those communities to meet with members of the men’s and women’s NCAA Division I hockey programs from St. Cloud State University.

These caravan stops are free and open to the public.  Fans will have an opportunity to meet with selected players and coaches from the SCSU men’s and women’s hockey teams, get autographs and take photos with the Huskies. 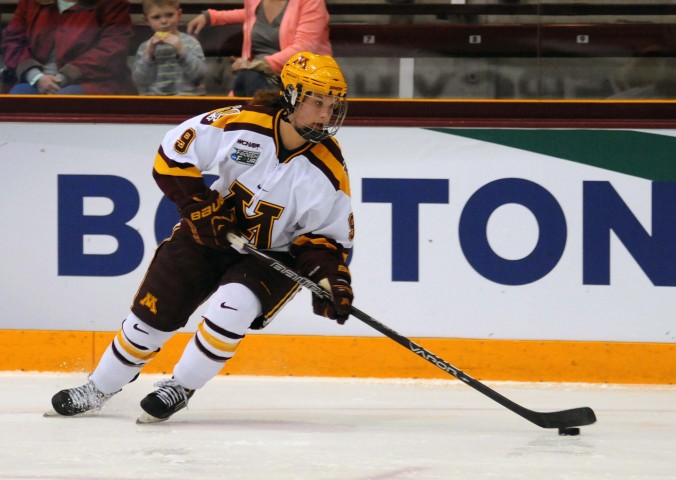 The roster includes six goaltenders, 16 defensemen and 36 forwards, who will be split up into Black, Red and White teams for practices and intrasquad games.

Davis and Terry were both drafted into the Canadian Women’s Hockey League over the summer as well. Davis was the third overall pick in the draft, selected by the Calgary Inferno, while Terry was chosen seventh overall by the Toronto Furies.

Following Canada’s National Women’s Team Fall Festival, players will be monitored at international events, such as the 2014 4 Nations Cup in Kamloops, B.C., as well as with their club teams during the 2014-15 season. These evaluations will assist coaches and scouts in selecting the team that will represent Canada at the 2015 IIHF Ice Hockey Women’s World Championship in Malmö, Sweden, next April.

Brant Nicklin, who enjoyed a prosperous puckstopping career at the University of Minnesota Duluth during the late 1990s, will return to the Bulldog men’s hockey program this season as a volunteer assistant coach.

Nicklin, 38, has served as the UMD women’s goaltending coach the past four seasons and as an assistant coach at the College of St. Scholastica in Duluth since 1995-96. He’s also run a number of local goalie schools and clinics over the past decade. Nicklin replaces another ex-Bulldog, Bill Watson, who is taking a leave of absence after eight years of volunteer assistant coaching service at UMD. 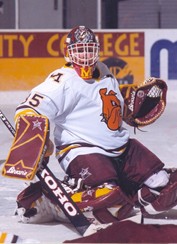 A native of Comox, British Columbia, Nicklin was the Bulldogs’ ace in the goal for four seasons and exited UMD in 2000 ranking first all-time in saves percentage (.895), shut outs (8) and appearances (137), second in saves (3,880) and goals against average (3.40) and third in wins (55). He still owns team records for games played (137), consecutive appearances (76) and consecutive starts (76, which at the time was a NCAA Division I mark). In 1996-97, Nicklin became just the second UMD freshman to play in every minute of his club’s Western Collegiate Hockey Association games and wound up landing a spot on that circuit’s All-Rookie Team. The following year, he posted a program-record five shutouts and a 21-16-2 overall mark while pacing the WCHA in saves for a second straight winter. Nicklin, the current WCHA record holder for consecutive league starts (80), was the recipient of the Bulldog Community Service Award as junior and the Goldie Wolfe Award (UMD’s Most Inspirational Player) in 1999-2000.

Nicklin, who graduated from UMD in 2006 with a Bachelor of Arts degree in recreation, resides in Duluth with his wife, Kelly, and their two children.

The award, one of the most prestigious in hockey, was presented to the National Hockey League by the New York Rangers in 1966. It honors the memory of Lester Patrick, who spent 50 years in hockey as a player, coach and general manager and was a pioneer in the sport’s development.

The recipients will be honored as part of the U.S. Hockey Hall of Fame Induction Ceremony and Dinner on Thursday, December 4, in Minneapolis. Tickets are on sale and can be purchased at http://www.ushockeyhalloffame.com/. 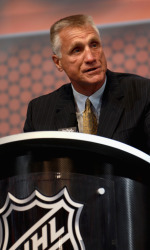 Holmgren, president of the Philadelphia Flyers, played 10 seasons for the Flyers and the Minnesota North Stars. Drafted 108th overall in 1975 by the Flyers, his achievements as a player were highlighted by scoring three goals in Game 2 of the Stanley Cup Final in 1980 – the first time a U.S.-born player scored a hat trick in a Cup Final game. He was also a 1981 NHL All-Star. He went on to serve as assistant coach, head coach, assistant general manager, and general manger of the Flyers before assuming his current position this summer.

Holmgren has been widely involved in furthering the sport throughout his career in various roles for USA Hockey. He has served on the U.S. Men’s National Team Advisory Group since 2009 and was the assistant general manager of the 2006 U.S. Olympic Men’s Ice Hockey Team. In addition, he served as the general manager of the 2006 U.S. Men’s National Team and was an assistant coach for Team USA at the 1998 Olympic Winter Game and the 1996 World Cup of Hockey. As a player, Holmgren competed for the U.S. at the 1974 IIHF World Junior Championship and was invited to play on Team USA for the 1981 Canada Cup, but could not due to injury.