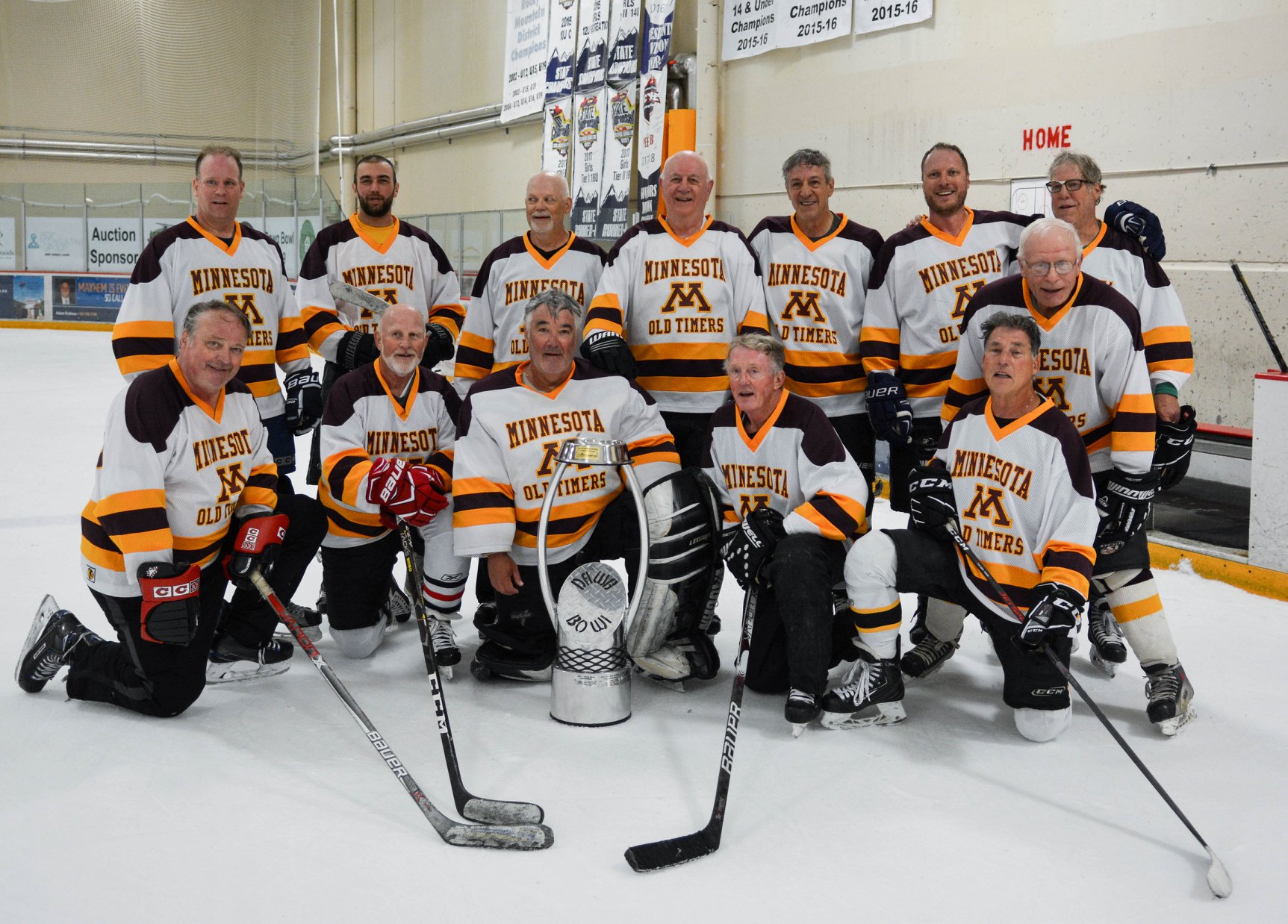 The MN Old Timers hockey team out of the Twin Cities has traveled near and far across the US, Canada and Europe to find interesting and challenging places to play adult recreational hockey.

Seven years ago, the daughter of one of the team organizers, Karen Zietlow, a former college hockey player in MN and now a resident of CO, invited the “old guys” back in MN to come to Littleton, CO, to play in a charity tournament called the Dawg Bowl, put on by an organization called the Dawg Nation Hockey Foundation. They have played in 6 tournaments to date and continue traveling to CO for some very good reasons.  Read on…

About the Dawg Nation Hockey Foundation.

What they are all about can be gleaned from their mission statement: We, the Dawg Nation Hockey Foundation, are committed to supporting the hockey family. By accessing the unique power and compassion of the hockey community, we celebrate life and provide help in times of need.

It all started in January of 2011.  A small group of adult recreation league hockey players, lead by now Executive Director, Martin Richardson, decided to start the Foundation by honoring a fallen friend.  Eight years later their idea to “make a difference” has grown into a truly remarkable organization to support families in need.

From their literature: the Dawg Nation Hockey Foundation is a nonprofit organization dedicated to promoting the spirit of fellowship via recreational hockey competition, supporting players and player’s families in high standards of health, wellness, and fair play, and supporting league and team players in local community outreach.

Since its inception, it has touched the lives of many “survivors”, the term given to players recovering from an injury or families dealing with a serious illness.  Dawg Nation has changed the lives of many recipients with its financial support and also of the volunteers who donate their time to help out.  As described by them: Dawg Nation Hockey Foundation exists for one reason, to help adult hockey players and their families in times of crisis due to catastrophic injury or illness. It provides financial support for those in need and emotional support from peers to guide a fellow player through their journey.

While they have had great success to date, raising over $1.3m since 2011, not including this year’s tournament, they continue efforts to grow via sponsorships, grants and other fundraising events.  They encourage their recipients, when able, to volunteer their time, wisdom or skills to help further their mission.

The foundation holds 4 events a year, but their main fundraiser and featured event is the Dawg Bowl hockey tournament. Held at the Edge Ice Arena in Littleton, a suburb of Denver, the 2019 version and the 9th annual, featured 44 teams in seven divisions vying to take home a Dawg Bowl Trophy.  Interestingly there are no age specific divisions, placement is determined by the skill level of the players.

From the moment you walked into the Edge arena, you got the feeling what the event was about and how it was run.  The hallways were lined with the logos of an impressive list of sponsors and partners, along with a great selection of silent auction items, references to the survivor and sled hockey games, tournament schedules and standings by division…all very organized and professionally created and displayed.

The top Platinum division was a real showcase of top talent and was made up of many past and present NHL players along with top D1 players as well. Some of the big names included Paul Stastny, Jan Hejda, Nate Guenin, Brett Clark, Kyle Quincey, Peter Sejna and many more.  They put on quite a show.  All games were open to the public and were free of charge.

In addition to the “Top Dawgs” games in the Platinum division, the Survivor game was the highlight of the entire tournament and was made up of hockey players who have suffered traumatic injury or illness.  They come together to share their love of the game, to support one another and to share their experiences.

Last year’s Dawg Bowl Survivor Game was played in honor of the Humboldt Broncos, the Canadian junior hockey team playing in the Saskatchewan Junior Hockey League that was involved in a horrific bus accident in 2018 that killed sixteen people and injured another thirteen.

This year the focus of the Foundation’s support was on those who served our country.  The official program cover sported the phrase, “Supporting the Armed Forces”.  As a tribute, the Survivors wore military-themed jerseys.  In an emotional check presentation ceremony before a packed house, the featured survivor and recipient of close to $70k in support (probably more now), was “Bronze Star with Valor” Army vet, Jason Shepperly, who dropped the ceremonial first puck at center ice. His story is amazing and can be found, along with lots of other details about the Foundation and Dawg Bowl, including events and plans to build a sled hockey friendly rink, by clicking ->> Here.

Shepperly was only one of three major recipients of DNHF support at this year’s Dawg Bowl.

Check out the above link and if you are so inclined, go to their donation page and consider supporting a great cause.  Also, the MN Old Timers may have been the only MN team to participate.  If you have a team that wants to participate, contact the DNHF and Martin Richardson at the email address on the their website.

For lots of pictures, stories, comments, check out the DNHF Facebook page as well ->> Here.

Back to the MN Old Timers. 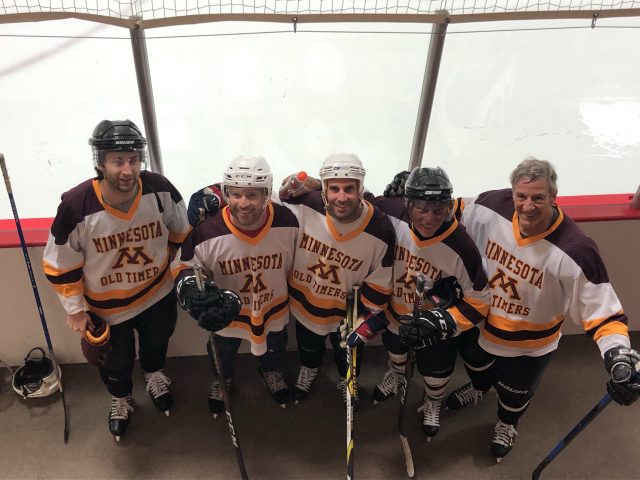 Last year the MN team had an average team age of near 65 and played in the novice (Copper) division of the Dawg Bowl.  There were 11 players over 70, and while playing fairly well in pool play, did not move on to the Sunday championship game.  This year, organizer Phil Zietlow, himself a cancer survivor and participant in the 2019 Survivors game, invited some younger players, including his own daughter Karen and some hockey playing sons of a few older players.  Average age at the start of the 2019 tournament was in the mid fifties.

The players new to the tournament quickly found out that the hockey was not the most  important aspect of the weekend, although playing with your son or dad is pretty special.  Spending time in and around the Denver area is not a bad way to the spend a long weekend either…lots to see and do.

In the locker room before the first game, the team had the privilege of meeting three of the survivors including Graysen Cameron, the Humbolt High School Broncos bus accident survivor that was making a remarkable comeback and was scheduled to play with the Top Dawgs and in the Survivors game.  Check out our Facebook post that was shared from DNHF.  The survivors told their stories, shook hands with everyone and encouraged all to give support to the cause.  It was a special moment, inspirational and very moving.

Long story short, the younger players provided just enough firepower to help win their pool and get to Sunday’s final game.  Unfortunately, 3 of the young players had to leave Sunday mid-day to catch flights home since they had to work on Monday.  Also Karen Zietlow had to leave for a milestone birthday party in Colorado Springs.  This left the Old Timers with 11 skaters, seven over 70 going into the championship game late Sunday afternoon…back to an average age of over 60+.

With strong goal tending from Dave O’Brien, stout defensive play and some timely goals from the old guys after being down 1-0 and 2-1, MN beat a tough local Colorado team 4-2 and hoisted the Dawg Bowl Copper Division cup.  The players reflected on the moment and realized what was truly important about the weekend in Colorado.  It could best be described by the tag line of the DNHF:  “Play Hard, Play Fair, Give Back.”

No doubt the Old Timers will be headed back to Littleton next year for a great hockey experience and, more importantly, to support the DNHF cause.  It’s a lot more than just another adult hockey tournament. 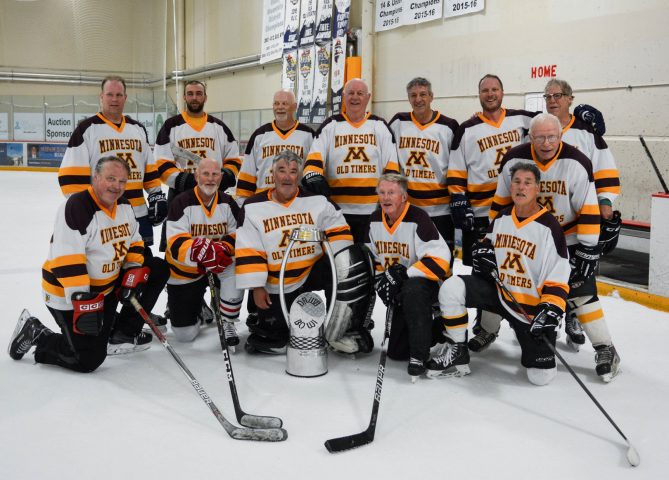