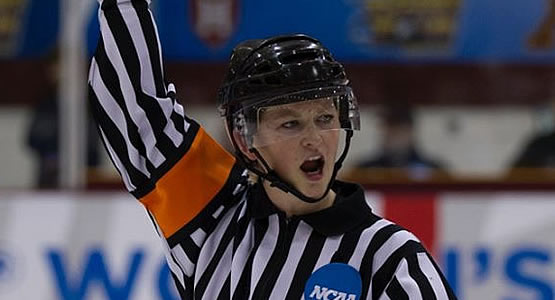 “The WCHA is committed to providing growth opportunities for all of our officials,” said WCHA Men’s Commissioner Bill Robertson and Women’s Commissioner Aaron Kemp in a joint statement. “As part of that process, we are exploring new evaluation and development paths for our female officials. Kristine has consistently been rated among the top on-ice officials in the women’s league and is certainly deserving of this opportunity for continued professional growth.”

A member of the on-ice officiating staff for the women’s WCHA since 2005, Morrison will skate Ferris State’s Crimson & Gold intrasquad game Saturday and the Bulldogs’ exhibition contest against the University of Lethbridge on Sunday.

Morrison, who played hockey college hockey at Wayne State, is married to veteran official Jonathan Morrison who works Big Ten games in Minnesota and Wisconsin as a linesman.