The preliminaries to the NCAA Frozen Four were all written and spoken in colorful language: Was the Big Ten clearly the best college hockey conference because they got three teams to the Frozen Four? Does a youthful UMD stand a chance as the NCHC’s lone entry? And are the Bulldogs doing it with mirrors, using five freshmen on defense and eight in all, and still returning to the Frozen Four?

It didn’t take long for the answers to start coming in, and they kept coming in as the Bulldogs held off Ohio State 2-1 in the first NCAA hockey semifinal at Xcel Energy Center in Saint Paul. 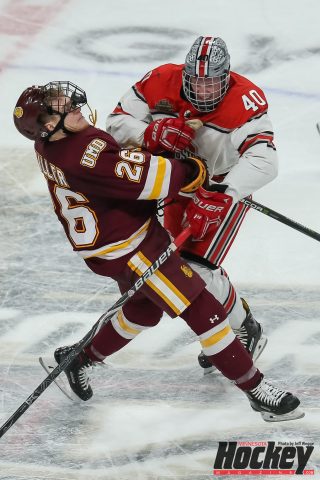 The story of this year’s UMD team is its defensive poise, all those freshmen notwithstanding. They worked it again and now take a 24-16-3 record into Saturday’s 6:30 p.m. championship game, in quest of their second-ever national championship. Ohio State ends its season 26-10-5, and the Bulldogs are assured of facing another Big Ten power in the winner of Thursday’s second semifinal, between Michigan and Notre Dame.

It doesn’t seem to matter. On the third shift of the game, UMD made a spirited attack and Ohio State goaltender Sean Romeo blocked a couple of close-in chances, although he seemed unable to find the puck after one save. Undoubtedly some cynic in the seats, and maybe on the Buckeye bench, might have wondered, “Romeo, oh Romeo, wherefore art that puck?”

Ah, UMD junior winger Parker Mackay found it before Romeo got his bearings and directed it out to center point, where UMD freshman defenseman Matt Anderson spotted his partner, fellow-freshman defenseman Louie Roehl, in deep on the right, impersonating a forechecking right winger. “I thought Matty was going to shoot,” said Roehl. Instead, Anderson sent Roehl a crisp pass, and Roehl ripped a shot past Romeo and into the Buckeyes net at 1:53.

The UMD fans were still aroused from that early goal, when a couple of seniors collaborated for another one. Jared Thomas deflected the puck away from an Ohio State point man, and when he saw it was headed for captain Karson Kuhlman, Thomas took off, breaking behind the OSU defense. Kuhlman, near the right boards in his own end, zipped a perfect 100-foot pass right on the tape, springing Thomas for a clean breakaway. Closing fast, Thomas gave a little head feint and a deke to go to his backhand, but he interrupted his own move to slide a backhander under Romeo and between his pads at 3:04.

“Karson made a great pass to me, and did what he always does — he gives us a spark when we need it,” said Thomas.

The Bulldogs used that early springboard for a dominant first period, outshooting the Buckeyes 17-4 and taking that 2-0 lead to intermission.

“We had two freshman ‘D’ get us the first goal, then Jared Thomas gets free for the second one, and that gave us a huge start,” said UMD coach Scott Sandelin.

Ohio State coach Steve Rohlik said, “We haven’t done that all year. For whatever reason, we seemed to be on our heels at the start, and I looked up and after only 3:04, we’re down 2-zip. UMD’s defense plays a lot like we want to play; they use their speed to take away time and space.

“But I told our guys to go out and play to win. We’ve come too far, and I was proud of the way we came back, and right to the buzzer, we felt like we could win.”

The second period was considerably tighter defensively, but neither team scored. The big, strong Buckeyes forwards started exerting their physical forecheck and the Bulldogs had some problems getting out of their end. But, as they’ve done all season, the Bulldogs displayed great poise in their own zone, and sophomore goaltender Hunter Shepard held the 2-0 lead into the third period.

Ohio State got back into the game thanks to a couple of penalties. Riley Tufte went off for elbowing at 5:38, and less than a minute after killing that one, Nick Wolff was called for tripping. 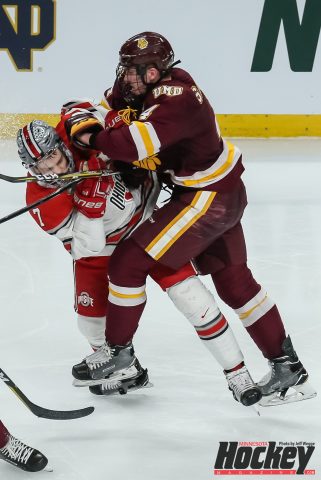 Even then, the Buckeyes needed one more “break” to get on the board. Sophomore defenseman Wyatt Ege moved in from the right point for a power-play shot, but his stick broke as he swung. As Ege, who is from Elk River, went in search of a new weapon, the puck skittered free, and Dakota Joshua shoved it to Tanner Laczynski, who moved to the top of the right circle and drilled his clean shot past Shepard at 9:27.

“We didn’t generate the number of chances we wanted to,” said Buckeye captain Mason Jobst. “But they did a good job clearing out in front, and their goalie played well.”

Rohlik pulled Romeo with 2:10 remaining, and the Buckeyes charged again. A couple more freshman defensemen came through with poise in the face of that pressure, however. First, when the Buckeyes rushed hard up the right boards, Mikey Anderson blocked a pass that ricocheted back out across the blue line, necessitating a regroup instead of an attack.

Then, with the clock ticking down into the final 15 seconds, right in the midst of a mad scramble in the corner, UMD freshman defenseman Dylan Samberg dropped down on all fours. Knowing he couldn’t cover the puck, or throw it out of the zone, he groveled back and forth on hands and knees, tapping the puck back and forth, but out of the Buckeyes reach, as the clock went down to 0:00.

The officials checked the video and determined there was still 1.2 seconds left, but the Bulldogs won the faceoff and killed that as well, for their second game-winning celebration. And it might be the first time in UMD history that a Bulldog hockey highlight video might have to show a freshman defenseman killing the clock on his hands and knees in the corner.