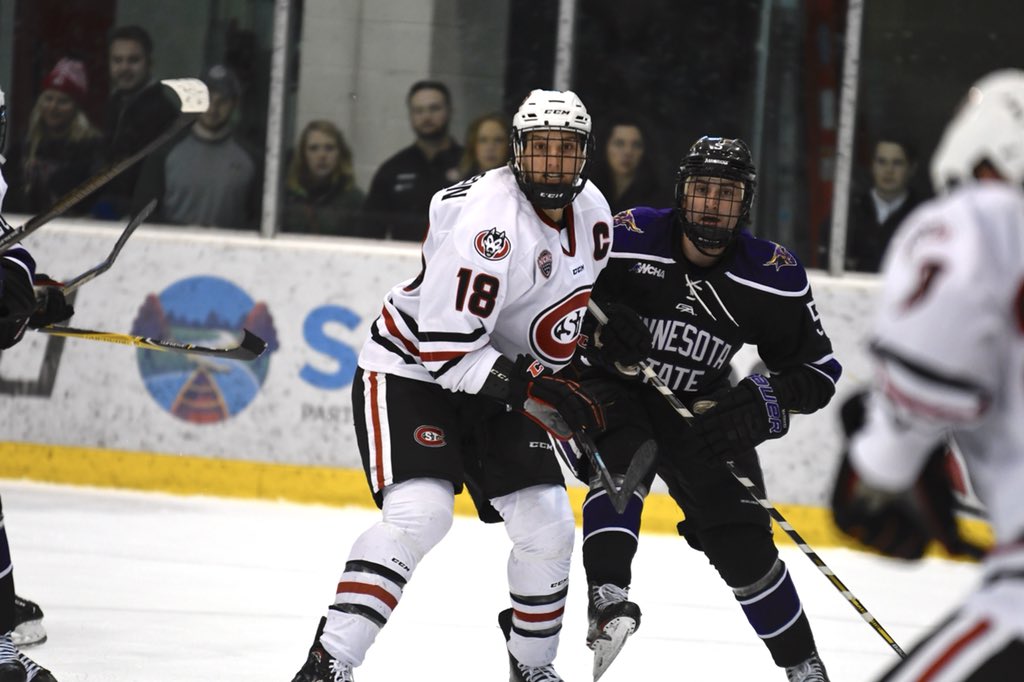 It may have been Hockey Day but the No. 9 Minnesota State Mankato Mavericks spoiled the No. 3 St. Cloud Huskies host-city fun in a MSU 5-2 win.

A packed house of over 5,500 people filled the Herb Brooks National Hockey and Event Center to see the Huskies take on the Mavericks, but a slow start out of the gate doomed SCSU’s chances from the get-go.

“They had zip the whole game,” St. Cloud junior Robby Jackson said. “They came in ready to storm our arena and we weren’t ready. It’s something we struggled with all year is slow starts and we don’t know whether it’s preparation or pregame warmup or what it is. It’s something that we’re definitely going to address ’cause we’re not going to win anything this year if we come out with a slow first twenty minutes.”

Knutson knew a fast start was necessary if they wanted to come out on top.

“We knew it was going to be a sold out barn and they really draw from their crowd,” Knutson said. “We knew it was important to try and get on it right away in the first five minutes and get the first one. And for Mackey to take that down the wall and sneak one in there, I think it was huge for our team. A little bit of a relief, but at the same time, it got us going. We were like, ‘hey, here we go now, let’s just stay on it here and keep playing our game.’ That next one, [Brickley] makes an unbelievable pass to me and I was lucky to bury it and give us the two-goal lead.”

St. Cloud was playing catch-up all game long, as Minnesota State never trailed in the contest. The Huskies were able to cut the deficit to one goal by the end of the period when Jon Lizotte snuck a wrister past Mavericks netminder Connor LaCouvee

After drawing a penalty in the early stages of the second period, St. Cloud couldn’t muster a goal on the man advantage. Shortly after killing the penalty, Jake Jaremko of Minnesota State snuck a puck past Jeff Smith and the Mavericks once again had a two-goal lead.

With Smith allowing three goals before the game’s halfway mark, head coach Bob Motzko made a change in net and freshman David Hrenak relieved Smith. The move provided a jolt for the team, because less than a minute after the change, Jackson cut the deficit back to one goal.

Hrenak continued to stop pucks, but at the 15:00 mark of the second period he was hung out to dry and Knutson took advantage for his second tally of the evening. The Mavericks skated into the second intermission up 4-2.

Neither team generated much offense in the first ten minutes of play during the final period. Finally at the 11:55 mark, SCSU drew a power play. Despite putting a few shots on goal, the Huskies weren’t able to crack LaCouvee.

“I thought he was solid,” Mavericks coach Mike Hastings said about his goaltender. “You need goaltending. Late in the season when you play a team like St. Cloud they’re going to make pushes and you’ve got to find a way to keep it out of your net. Us giving up the late one, I was wondering if here comes the proverbial snowball down the hill, but we went to the break and did a good job coming out of that period and getting to the next one.

St. Cloud made a last-ditch effort in the final five minutes. Jackson nearly was inches from netting his second goal of the game and Motzko even pulled Hrenak for an extra-attacker with under two-minutes remaining.

Despite the man advantage, St. Cloud wasn’t able to pull off the comeback, falling to 14-5-3 (8-3-1 in conference play) on the season.

Meanwhile, Minnesota State improved to 18-7-0 (15-5-0 in conference play) and appears to be a force to be reckoned with as the NCAA Tournament in March.