Minnesota State freshman tabbed as league’s Rookie of the Week 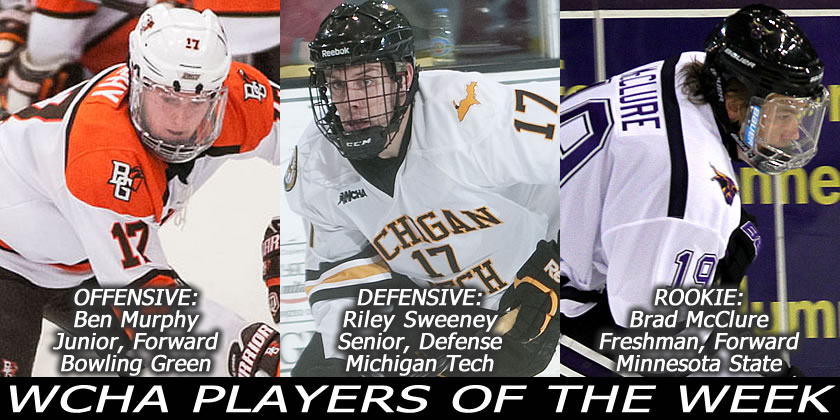 Minnesota State freshman tabbed as league’s Rookie of the Week

Murphy tied for the WCHA lead with three points on two goals and an assist, twice sparking comebacks as No. 8 Bowling Green rallied for a pair of one-goal victories over visiting Ferris State. In the series opener, Murphy’s second-period backhander tied the score 1-1 and set the stage for a 2-1 Falcons victory. Saturday night, he scored the game-tying goal just 5:49 into the third, before BGSU potted the game-winner just 80 seconds later. The junior from Duxbury, Mass. also assisted on the Falcons’ first goal Saturday night and finished with a +3 rating.

Sweeney earned Winter Carnival MVP honors after his scoring his first two goals of the season in No. 5 Michigan Tech’s sweep of visiting Bemidji State. The senior from Delta, British Columbia scored on the only two shots he took all weekend, netting a shorthanded strike Friday and an even strength goal Saturday. Sweeney, whose 146 career games played lead the team, also keyed a Huskies’ defense that allowed just two goals in a pair of tightly-contested victories.

McClure tied for the WCHA lead with three points this past weekend, recording a trio of assists as No. 1 Minnesota State swept visiting Alaska Anchorage. The freshman from Stratford, Ontario assisted on the game-winning goal on both nights, helping Casey Nelson on Friday and Teddy Blueger on Saturday. He also assisted on a power-play goal and finished the weekend with a +3 rating. McClure is tied for 19th in the nation in freshmen scoring with 19 points on the season (eight goals, 11 assists).