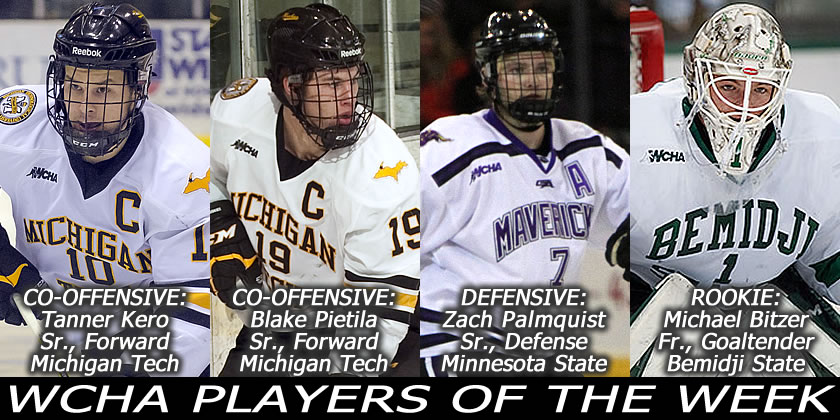 Michigan Tech senior co-captains Tanner Kero and Blake Pietila each had five points – while both also recorded their 100th collegiate point – to lead the Huskies in a WCHA series sweep of Alabama Huntsville. After recording an assist in Friday’s win, Kero reached the career century mark with a third-period helper Saturday – part of a four-point game that included two goals and two assists.

Pietila scored a goal and had an assist in Michigan Tech’s 5-0 win Friday, and then tallied three helpers on Saturday, including a third-period assist for his 100th career point. Kero now ranks sixth in the country and leads the WCHA with 35 points (13 goals, 22 assists), while Pietila – a New Jersey Devils draft choice – has 24 points (11 goals, 13 assists) for the fifth-ranked Huskies.

Palmquist excelled on both ends of the ice to lead top-ranked Minnesota State to a WCHA series sweep over visiting Ferris State. The senior from So. St. Paul, Minn. assisted on Matt Leitner‘s power-play goal and an even strength tally by Bryce Gervais during Friday’s 5-1 win, before assisting on the game-winning, power-play strike from Gervais in a 5-1 triumph Saturday. Palmquist also helped anchor a Mavericks defense that held Ferris State to just 40 shots and two goals. Palmquist now ranks third among all defensemen in Minnesota State’s D-I history with 89 career points (23 goals, 66 assists).

Bitzer helped Bemidji State run its unbeaten streak to four games – all against top-10 opponents – and capture three of four points against Bowling Green in a WCHA series. The freshman from Moorhead, Minn. recorded 41 stops and a .911 save percentage, held the Falcons scoreless in seven power-play opportunities and posted a 1.93 goals against average on the weekend. Bitzer recorded 18 saves in Friday night’s 5-2 victory, before logging 23 stops in 64:31 as Bemidji State rallied from a 2-0 deficit to earn a 2-2 tie Saturday.