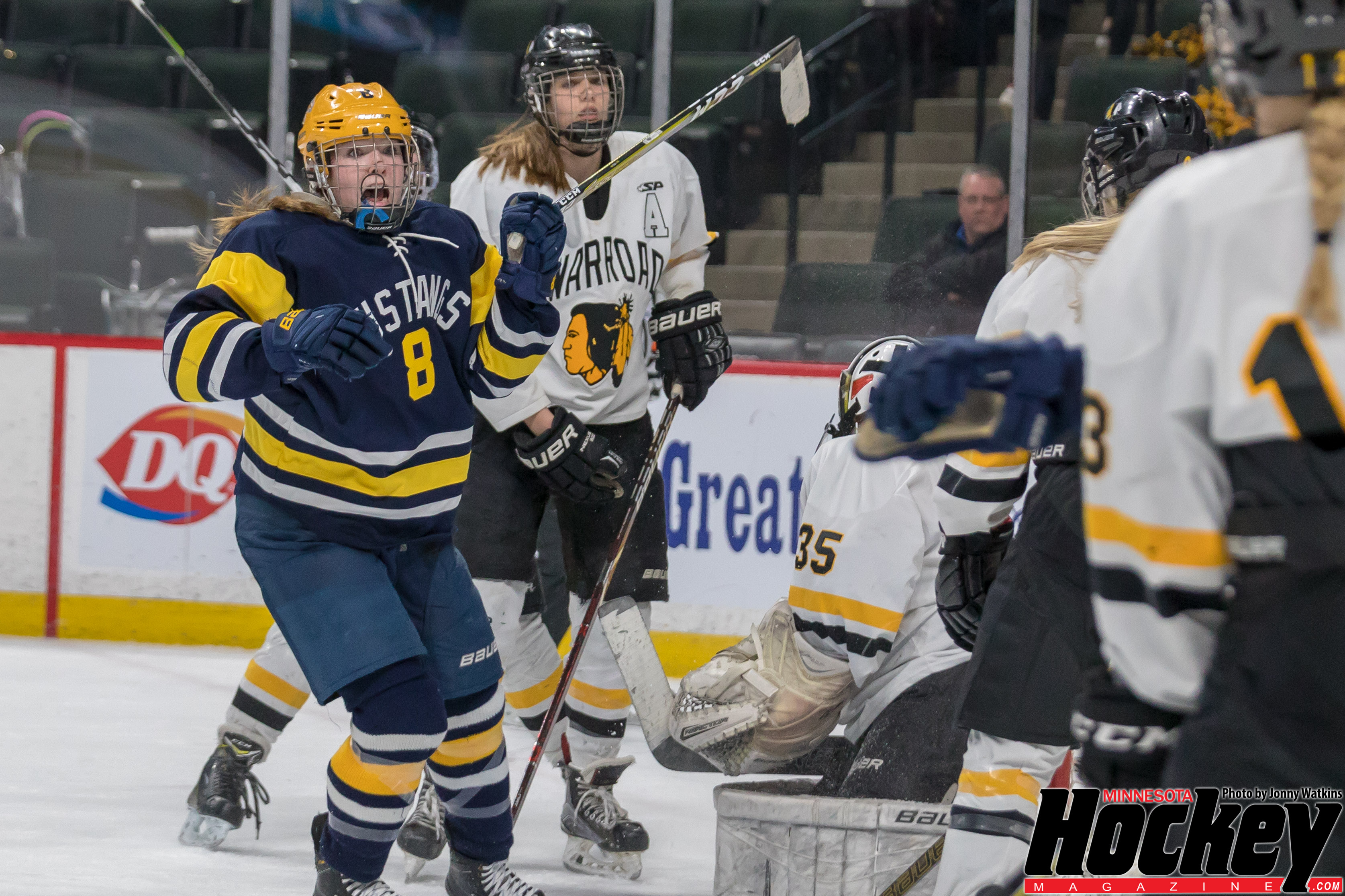 Breck freshman Sadie Lindsay celebrates her overtime goal to give the Mustangs a 3-2 win over Warroad in the Class A state title game on Saturday afternoon at Xcel Energy Center. (MHM Photo / Jonny Watkins)

St. Paul — For the first time in six years, the Class A state title game had to be settled in overtime. Funny enough, that’s exactly how the Breck  Mustangs won their first state title in 2012.

After a valiant comeback by the Warroad Warriors, the Mustangs needed just eight seconds of overtime to capture the Class A championship, with a dramatic 3-2 win.

It was the fastest ending to an overtime in Minnesota State High School State Tournament history. 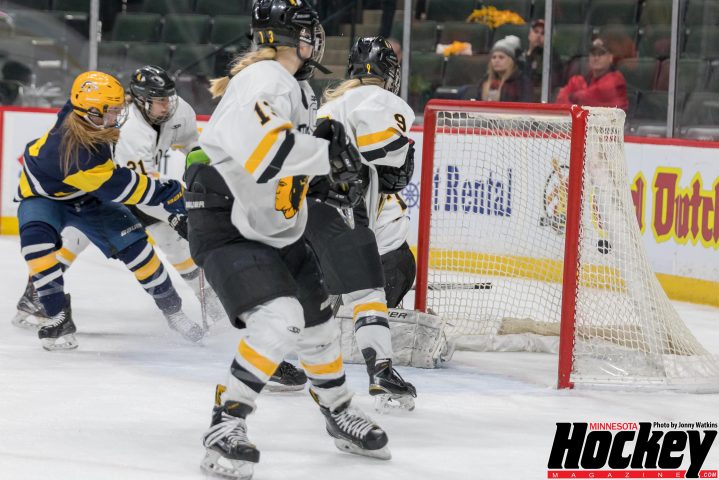 After the Mustangs won the opening draw, they skated into the Warroad end and freshman Sadie Lindsay threw a puck on net and just like that, the underclassman had the overtime winner; crowning Breck the champions in Class A. The freshman said it was a dream come true.

“It was one of the greatest feeling of my life, honestly,” Lindsay said. “To win the state championship has always been a huge dream of mine and it’s a dream come true to win.”

Lindsay wasn’t the only underclassman who played a large role in her team’s success as goaltender Uma Corniea, just a seventh grader, made 25 saves in the win. Every time the camera panned to her on the Xcel Energy Center jumbotron, there was always a big smile cracked around her face.

The Mustangs came out with the same fire in the second period and two minutes into the frame, sophomore Olivia Mobley found the back of net, giving her team a 1-0 lead. Mobley’s goal was assisted by freshman Emily Zumwinkle. It was Mobley’s fourth goal and team-leading eight point of the tournament. Breck was able to get a couple more power plays but Warroad’s penalty kill was superb, keeping things contained at a one-goal game.

It was an uneventful start to the third period, but the final five minutes of regulation was when pure chaos erupted. The Warriors would finally get on the board via the power play when junior Kaitlyn Kotlowski blasted a shot from the point and things were tied at one.

Just shortly after the tying goal, Lindsay streaked in a on 2-on-1, and it appeared she scored the go-ahead goal; crashing hard into the net. But after video review, it was determined that net came off its moorings when the puck passed the goal line, therefore it was waved off. On the ensuing faceoff after the waved-off goal, Mobley batted a loose puck into the back of the net and Breck had a 2-1 lead with 2:30 left in regulation. 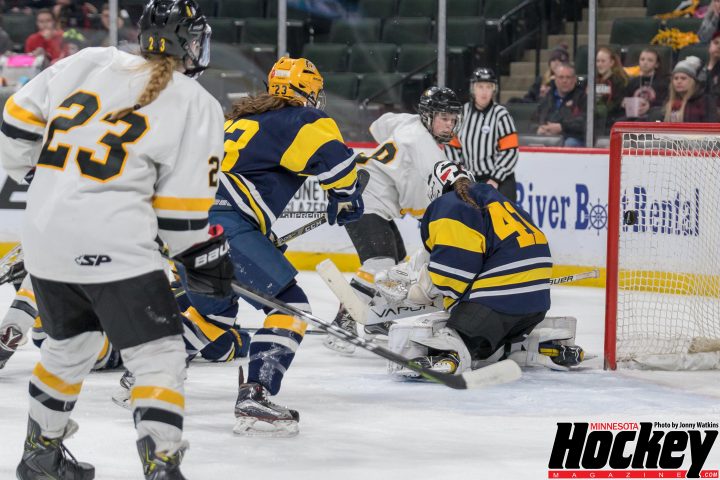 With Warroad trailing and a championship on the line, the team pulled Kuntz for an extra-attacker. Breck had a chance to seal the deal with an empty netter but they instead were called for an interference penalty and the Warriors now had a 6-on-4 advantage. That’s when sophomore Marlie Johnston netted an equalizer, sending things to overtime and once again the Warriors were right back in it

“I thought we had a good third period,” Warriors head coach David Marvin said. “We were fortunate to still be in the game at that point. We thought we were one shot away. We battled hard.”

Despite surrendering two leads in the final five minutes, Mustangs head coach Rhonda Engelhardt knew the game was far from over.

“I wanted to make sure they were still confident,” Engelhardt attested. “The game wasn’t over, we still had it, go out there and give it everything you got. That was the theme was to just go out there and we’re not done, were going to win this game and they needed to believe that.”

And Breck did exactly that. Even with a younger core of star players, they did not waver in the biggest games of their lives.

With so many talented players at such a young age, it appears the Breck Mustangs will be a force to be reckoned with for years to come in girls hockey. 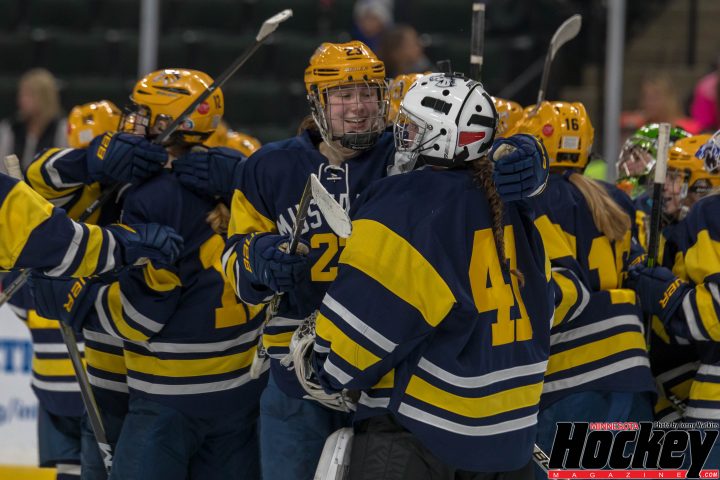