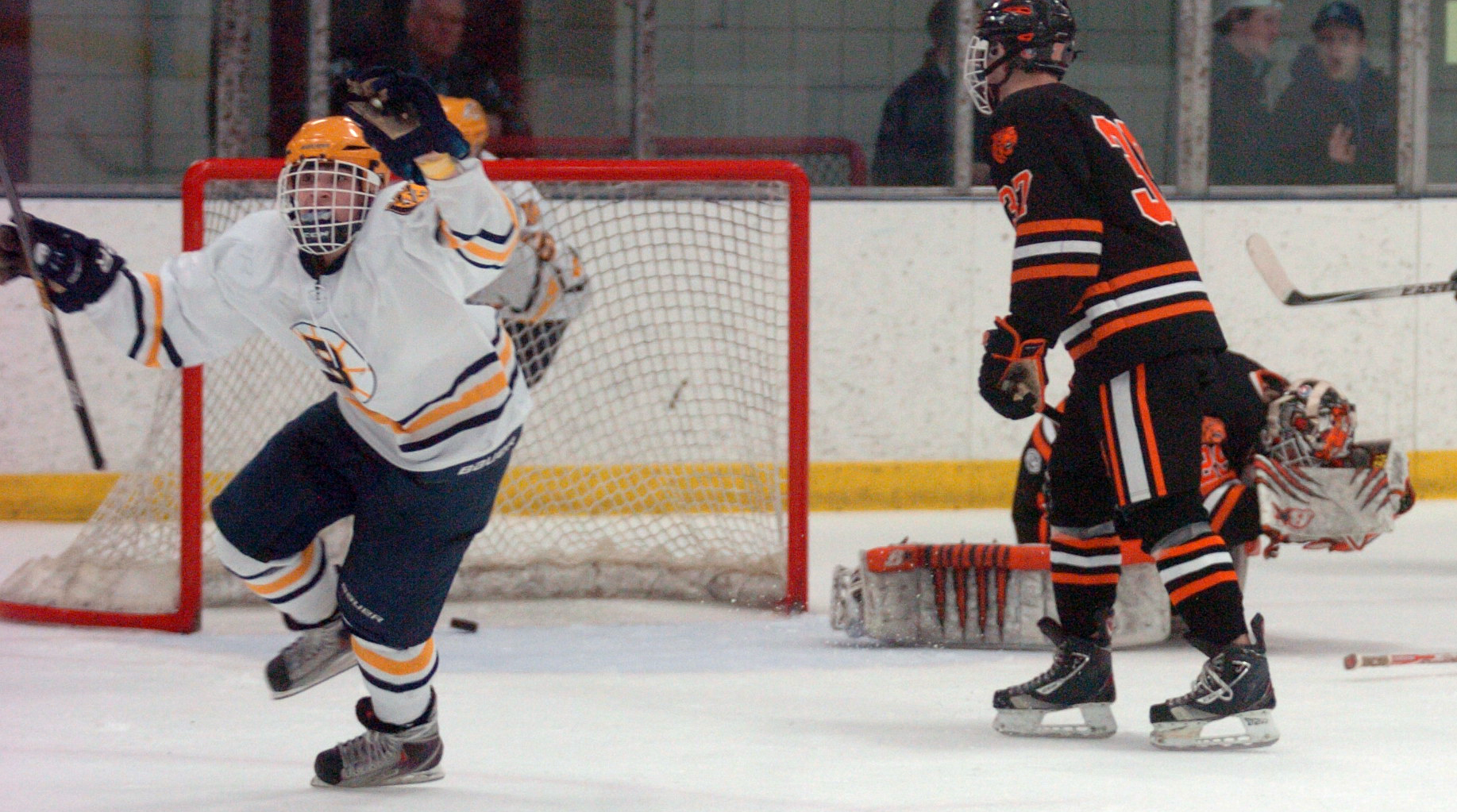 MINNEAPOLIS – You could feel it coming. Something had to give.

With 2:10 left on the clock near the end of the second overtime, Breck junior Will Blake scored the game-winning goal for a 3-2 win against Delano in the Section 2A final Thursday evening at Parade Ice Garden.

“Just got a breakout pass, got it on net,” Blake said. “I was pretty tired, just wanted to get off the ice.”

Both teams had their chances all night, and then Breck got a 2-on-2 breakaway.

“We told these guys just to shoot,” Breck coach Les Larson said. “We just told them don’t make any mistakes. We can play all night if we have to.

“Thank goodness it worked out.”

The thrilling finish wasn’t the only excitement in the game.

The standing-room-only crowd was electric with about 3:41 left in regulation. That’s when Delano senior defenseman Jeff Linna buried a cross-ice pass from sophomore Brian Halonen to tie the game at 1-1. The game was scoreless through nearly the first two periods.

About a minute after that tying goal, Breck regained the lead on Chase Ellingson’s shot off the rush. Breck took control of the game, but once Delano got a handle on the puck, it pulled the goaltender with about a minute remaining in regulation.

Time ticked down as the Tigers quickly tried to get something going offensively. The equalizer came with 37.5 seconds left from sophomore Ben Meyers.

Delano and Breck each had a few close chances in overtime. Delano Coach Gerrit van Bergen saw the game-winning play as pretty routine.

“Once the puck left his stick, I thought it was going wide,” he said. “Unfortunately, it just snuck by.

Still, after the medals were awarded and the gear picked up, van Bergen talked to his team about why they love this game so much. They played a great game, and he couldn’t be more proud of them, he said.

“You couldn’t write a much better storyline,” van Bergen said. “I could’ve found a better ending, but it’s a great storyline.”

A new season starts next week for Breck, as it heads back to the state tournament for the 11th time and sixth in seven years. They’re hoping for a fifth state title.

“It’s our goal every year,” Larson said. “Thank goodness it went our way this time.”