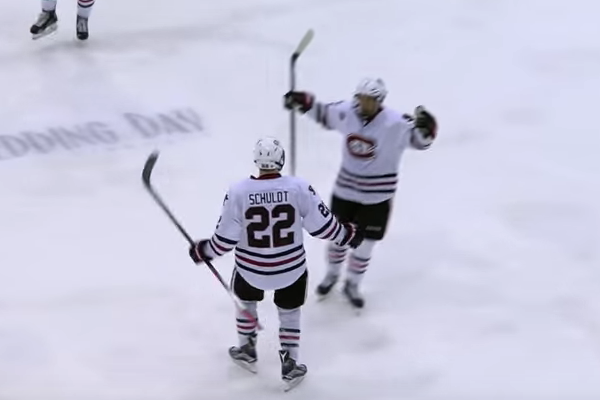 St. Cloud State’s Jimmy Schuldt is congratulated by a teammate after his second period goal gave the Huskies a 2-0 lead over Minnesota State on Friday night at the National Hockey Center. (Image captured via YouTube)

SAINT CLOUD – It was a goal so nice, he got to celebrate twice. Well that’s how St. Cloud State freshman defenseman Jimmy Schuldt can one day tell the story of his first collegiate goal and point.

The rookie from Minnetonka’s heavy blast from the right point beat Minnesota State goaltender Cole Huggins at 10:55 of the second period to give the Huskies a 2-0 lead over the Mavericks on Friday night at the National Hockey Center en route to a 4-0 win.

“That shift was incredible by our forwards,” Schuldt said, deflecting praise onto his teammates. “They just kept pucks in, the kept forechecking and working hard and I ended up getting rewarded for it.”

St. Cloud State fans have grown accustomed to seeing No. 22 with his arms raised high with Jonny Brodzinski compiling 65 goals in his three seasons donning the now-familiar sweater.

Playing in his first regular-season home game with parents Steve and Sheri and brothers Joe and Jacob on hand, Schuldt soaked in the experience.

“To play in front of this many fans and see our student section all the way up to the top,” Schuldt said. “Just the energy in the building was incredible.”

But as the goal horn still sounded, the officials were already on their way to the penalty box to review the play, tempering the celebration momentarily. But Schuldt said he wasn’t worried whether the goal counted or not.

“If it would’ve been taken away, I think we would have been in a good position just because, at that point, we were really dominating,” Schuldt said.

The officials ultimately ruled no goalie interference had occurred and, with that, the horn went off again and Schuldt’s teammates once again offered congratulations.

Schuldt, a three-time letter winner in hockey as a Skipper, collected 60 points (10-50—60) in 82 games on the Minnetonka blue line before moving on to a stellar two-plus season USHL career with the Omaha Lancers.

“Anytime you get the first goal of your career it’s got to be an unbelievable feeling, and then he ripped it,” St. Cloud State coach Bob Motzko said. “He had a great year last year so he knows how to shoot that puck.”

Schuldt said there’s a lot of credit to go around for easing his transition from junior hockey to the NCAA, but singled out defensive partner, and St. Cloud State captain, Ethan Prow.