Wild youngsters get their shot as team’s depth tested 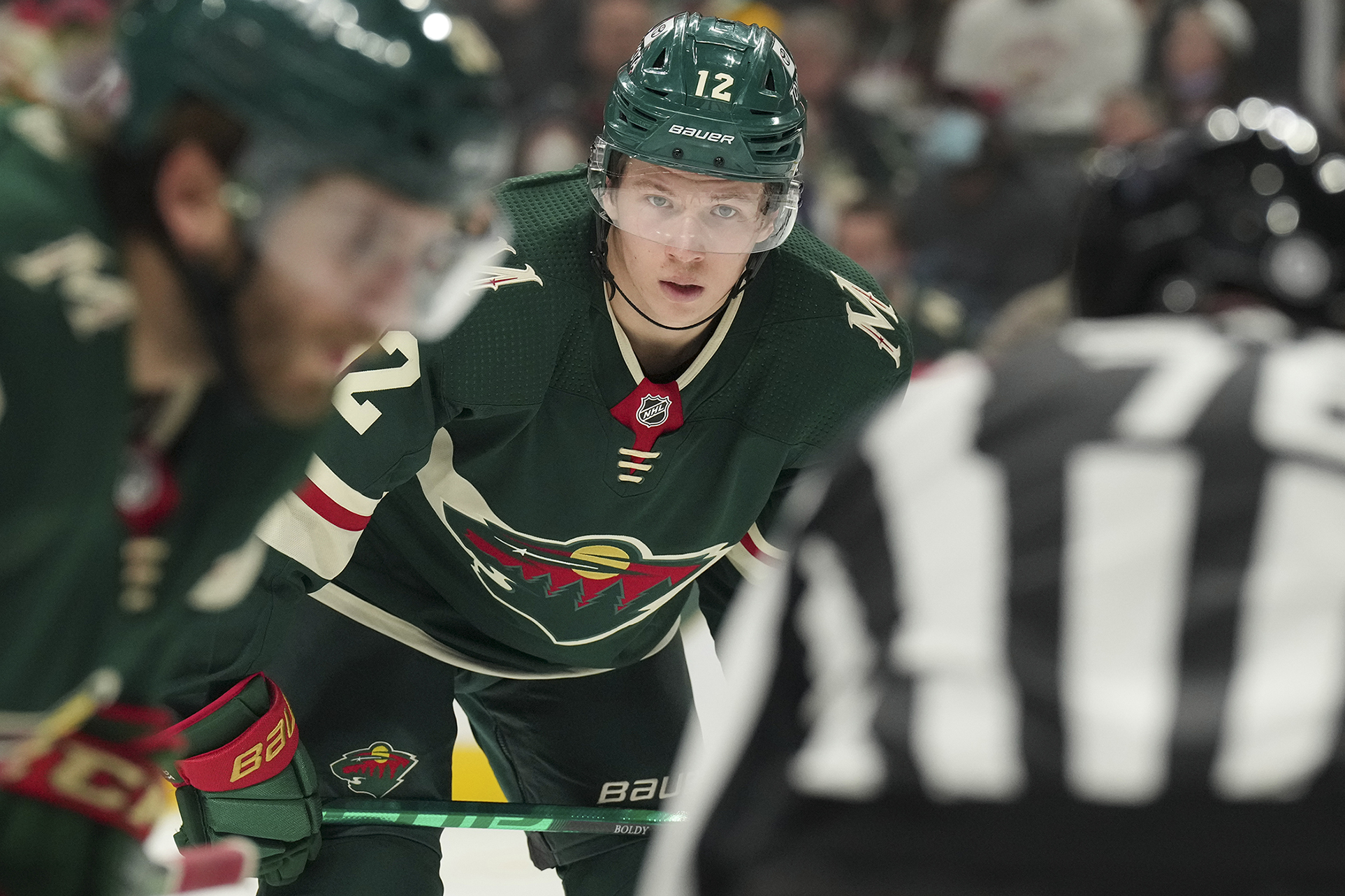 When this reporter interviewed Montreal Canadiens forward Cole Caufield last May for another story prior to Game 6 of the Stanley Cup Playoffs between the Vegas Golden Knights and Minnesota Wild, Caufield said: “I hope Boldy’s playing.”

Caufield shared that sentiment with many in the state of hockey at the time, wanting to see the 2019 NHL first-round pick Matt Boldy make his NHL debut. Caufield, who was called up and made a splash with the Canadiens in the postseason last year, was teammates with Boldy on the U-17 and U-18 U.S. National Teams. 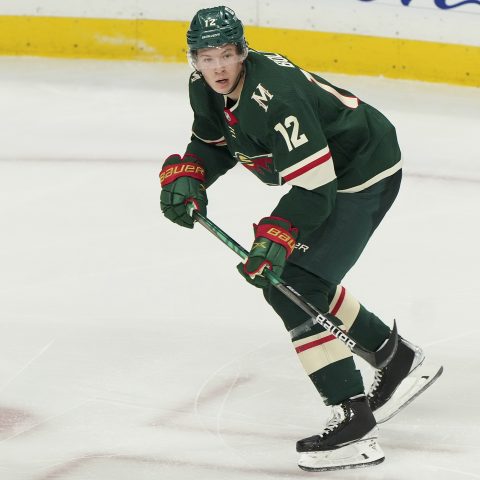 Boldy was a game-time decision for the Wild that night but ultimately didn’t get the nod for his first NHL game until about seven months later, and in memorable fashion. The 20-year-old got the call prior to the Wild’s game in Boston on Jan. 6, 2022, near his hometown of Milford, Mass.

It’s exciting enough playing in your first game, and in front of parents, family and friends, but Boldy added the cherry on top when he scored a goal in the second period on a pretty passing play from Marcus Foligno. Boldy raised both arms in the air in celebration before his teammates surrounded him.

“It was a surreal moment for sure, having it here with all my friends and family,” Boldy said after the game. “I think I blacked out after I scored.”

Wild defenseman and alternate captain Matt Dumba told Boldy that Jonas Brodin also had the secondary assist on Dumba’s first NHL goal, during a 5-1 victory over Dallas on Oct. 12, 2013 with the Wild.

“Just kind of crazy how that can happen so many years later,” Dumba said.

Boldy certainly left his mark on Wild and NHL history with his goal. He’s only the third Massachusetts-born player in NHL history to tally a goal in his NHL debut in Boston; he’s the first to do it while playing for the visiting team. Boldy is also the second Wild player in as many seasons to score in his debut. The other, of course, is Kirill Kaprizov who joined the league last year.

Boldy signed a three-year, entry-level contract with the Wild on March 30, 2021, following his sophomore season with Boston College, where he led his team in all scoring categories last season. He scored a point in 11-of-14 games with the Iowa Wild last year, netting 6 goals and 18 points.

Scoring in his debut is nothing new. Boldy scored a power-play goal in his professional hockey debut with Iowa on April 9 last spring. He also added an assist on a goal by Calen Addison, another player who suited up for the Wild on Saturday night against the Washington Capitals at Xcel Energy Center. 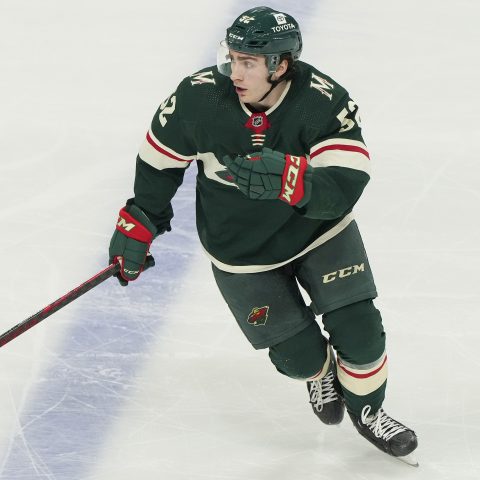 With two of the team’s top prospects called up for NHL debuts in the same game in Boston, much of the focus was on Boldy and Marco Rossi. But it was rookie Connor Dewar that Wild coach Dean Evason praised highly for that game. Evason acknowledged that Boldy and Rossi were ready to play and make the step from Iowa to the NHL.

“Having said that, Dewar probably had the best game of anyone,” Evason said at Friday morning’s practice.

Dewar made his NHL debut Oct. 28 in Seattle but had gone without a point in his first four NHL games, until Thursday when he registered an assist on a Nico Sturm goal.

Boldy, Rossi and Dewar are all shining bright spots for the Wild during a time that’s been anything but a sunshine-filled stretch of the 2021-22 season for Minnesota.

A month ago, the Wild were the best team in the NHL after a 5-2 win in San Jose gave Minnesota an eight-game winning streak. It accumulated 39 points in 26 games through Dec. 9, going 19-6-1. They led the second-place St. Louis Blues by seven points in the Central Division.

Since then, the adversity train crashed into the Wild franchise with everything from a season-long losing streak to postponed games to injuries and COVID-19 protocols for key players.

The Wild followed up the winning streak with the five-game losing streak that actually went from Dec. 11 through the Winter Classic on Jan. 1 at Target Field (a rough 6-4 loss to the Blues).

Even when the Wild responded to break the losing string, winning 3-2 in Boston, it still left a sour taste because Kaprizov was injured with a hit into the boards from Trent Frederic that Evason repeatedly called “not a hockey play.”

Kaprizov missed at least Saturday’s game, and he wasn’t alone on the sidelines. Joel Eriksson Ek was still out after being injured in Dallas. Brodin missed the Winter Classic in COVID-19 protocols before returning to the lineup in Boston. But he was out again with an injury. Nick Bjugstad left practice earlier in the week and will be out with a long-term injury, according to Evason. No. 1 goaltender Cam Talbot was pulled in the Winter Classic because of injury. Brandon Duhaime, Jordan Greenway and Alex Goligoski all missed Saturday’s game in various stages of COVID-10 protocols. Captain Jared Spurgeon has missed the most time, sidelined with a lower-body injury.

“We all are trying to make the best of it,” Evason said. “Our group has done a tremendous job of not letting those distractions affect us as a group. We go out, we play hard, we play right. Hopefully, that’s enough to give us an opportunity to have success.” 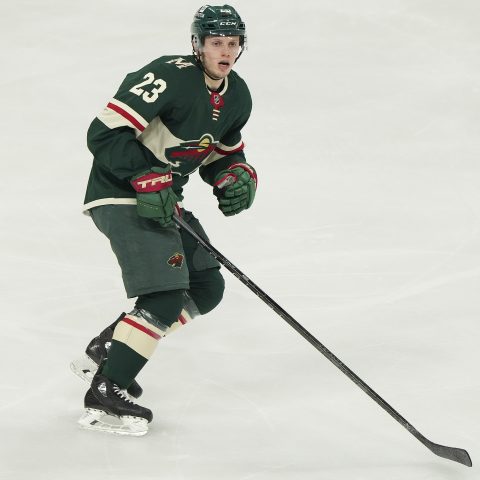 Some players might be back sooner rather than later, and with more postponed games ahead, the time could end up benefiting the Wild in the short-term as they try to get healthy players back in the lineup. Still, fresh faces are getting chances to step in and step up.

“I’ve always found that when you’ve got a depleted lineup, guys step up and that’s really when you find out a lot about your team,” Dewar said.

Saturday’s lineup against the Capitals included Boldy, Rossi, Dewar and Kyle Rau scattered on the forward lines. Addison and Dakota Mermis played on the blue line.

None of the youngsters factored into the Wild’s goals on the scoresheet – with the first goal credited to Foligno for his 100th career tally but was really an own-goal by Washington on a delayed penalty with the goaltender pulled – but that didn’t mean they weren’t noticeable in good ways.

Boldy played more than 20 minutes, was a plus-2 with a takeaway and blocked shot. His only shot on goal came with less than five minutes left in regulation, but he wove his way through three Capitals players in the zone to drive the net and get a backhanded shot off. He also made a between-the-legs pass from behind the net to a teammate as the Wild pressured late with the extra attacker.

Rossi had three shots on goal. So did Dewar, who showed he’s being more aggressive in taking shots and driving the net in his 11:47 on the ice.

“You praise Boldy and Marco (Rossi) for what they’ve done, and they’ve been playing great for us, smart players at a young age,” Foligno said. “Those guys want to stay here. And then you throw in, I thought Dewar played awesome tonight.

“Just all those guys are bringing it and buying in.”