NHL banks on U of M for Stadium Series 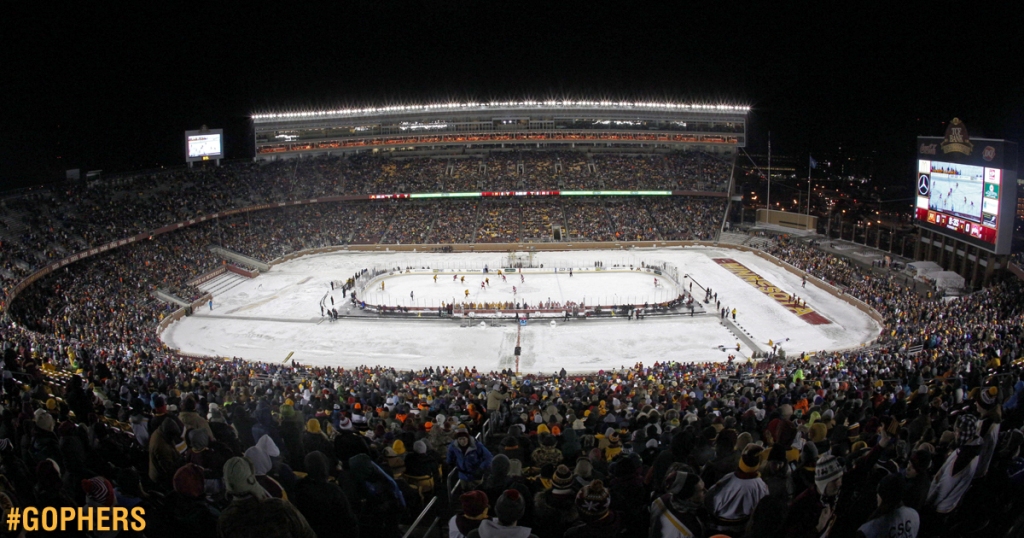 SAINT PAUL – The date and location of the first-ever outdoor National Hockey League game in state history is no longer a mystery. NHL Commissioner Gary Bettman announced today the NHL Stadium Series game featuring the Minnesota Wild hosting the Chicago Blackhawks will take place Sun. Feb. 21, 2016 at TCF Bank Stadium on the campus of the University of Minnesota.

“It’s a great day for our fans, the State of Hockey, the community and our organization and franchise,” Minnesota Wild Chief Executive Officer Matt Majka said. “We worked at it for a long time; the league has made it clear what the expected of us to be in a game like this, we worked on that and now here we are. It’s exciting.”

The game will be the first of two Coors Light NHL Stadium Series contests in 2016 with the Colorado Avalanche entertaining the Detroit Red Wings on Feb. 27 at Coors Field where the Colorado Rockies play their home games.

Bettman also revealed the Boston Bruins will host the Montreal Canadiens in the 2016 Bridgestone NHL Winter Classic on Jan. 1, 2016 at Gillette Stadium in Foxborough, MA, home of the New England Patriots.

Minnesota Wild owner Craig Leipold composed a letter to Wild fans which was posted on the team’s website expressing the team’s pleasure in landing the coveted event.

“We’re thrilled that the NHL has awarded a 2016 Coors Light Stadium Series outdoor game to Minnesota. Congratulations, you deserve this chance to showcase and celebrate our favorite game in the great outdoors on a national stage. The recent Hockey Day Minnesota events all around the state showed once again how the outdoor game is in our blood.”

Leipold went on to say he is confident the team will eventually be awarded the Winter Classic, an event he has been openly campaigning for virtually since he bought the team. Majka said accepting a Stadium Series game would not stand in the way of that goal.

“That was a big point for us, actually,” Majka said. “We were assured by the league if we took this game,  and did a good job with it, that would not at all preclude us from a future Winter Classic and, hopefully, very soon.”

The NHL had a pair of venues to choose from, including Target Field, but TCF Bank’s 10,000 additional seats — and the additional revenue they bring —won the league over. According to Majka, the Wild’s input was minimal as the NHL ultimately has the final say.

“We had a difficult choice here ourselves because we have two great venues in this market that easily can host this game and these events,” Majka said. “The league worked hard on it with both venues … in the end it was a very tough choice for the NHL.”

Minnesota Athletic Director Norwood Teague said the university was aggressive in its pursuit of the event and feels the U of M offers the league the ideal venue.

“Our sightlines are very good for football and for hockey,” Teague said. “We’re a newer stadium so we have a lot of steepness to our venue, we’ve got a lot of club seating, we have some great concessions; we’re just a new stadium so it always helps with architecture and things that were put in place there.”

The University of Minnesota and TCF Bank Stadium is no stranger to hosting large-scale outdoor hockey games having hosted the 2014 Hockey City Classic on Jan. 17, 2014. The evening featured a women’s game between the Gophers and Minnesota State followed by the Minnesota men hosting Ohio State in front of 45, 021 bundled up fans.

Teague said it would be hard to believe that experience did not factor into the league’s decision.

“We’ve been down that road and we’ve had one and I know if I was in their shoes it would have made a difference with me.”

The Hockey City Classic concluded a week-long series of activities on the outdoor rink including several high school games, team practices and open skating. Majka said it’s too early to speculate on what the game’s surrounding fanfare will include but they certainly include high school games — including Hockey Day Minnesota — college games and a possible visit by the Wild’s AHL club, the Iowa Wild.

He also opened the door to the possibility of an alumni game featuring players from the North Stars and Blackhawks.

“I think our fans might want to see Secord and Ciccarelli back on the ice for a day or two.”