Prowlers act like they’ve been there before in beating Packers 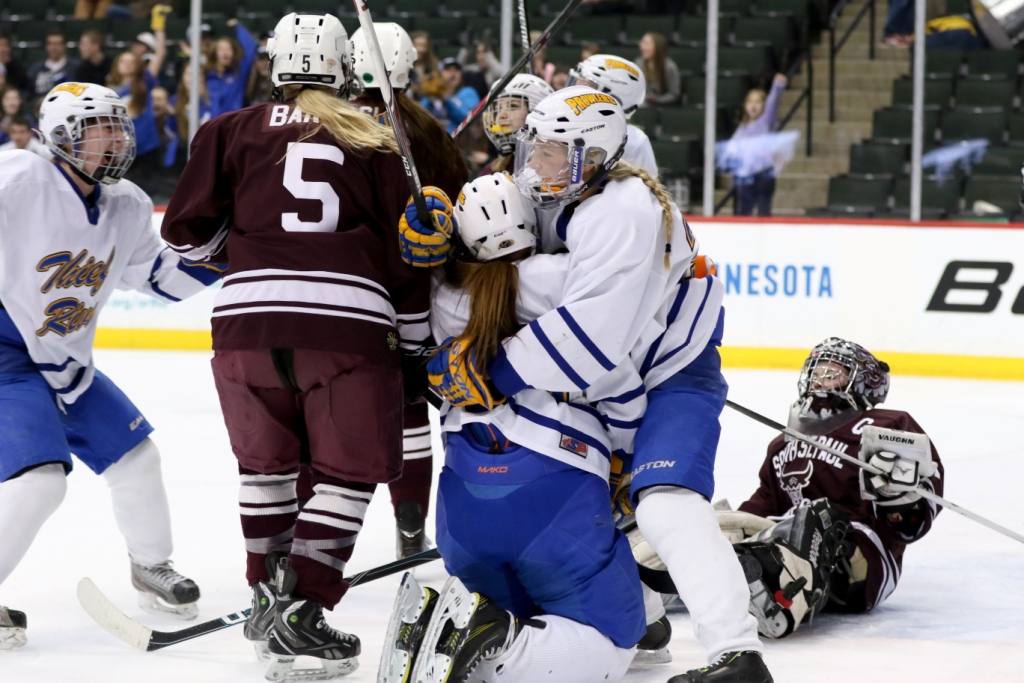 Prowlers act like they’ve been there before in beating Packers

But not for the Prowlers.

Thief River Falls overcame their lack of state tournament experience to outlast South St. Paul 4-1 in the Class 1A state girls’ hockey semifinal. The Prowlers will move on to play in their first ever state final against the reigning state champion Blake Bears Saturday afternoon at the Xcel Energy Center.

“It’s nice to put a Thief River falls stamp on it,” Prowlers coach Whitney Restemayer said. “Not only are we the only Thief team to be here, but we are beating good teams too that have a lot of history and have been here a lot. We’re just doing our thing.”

Even with a 53-8 final shot differential in their favor, the Prowlers found themselves only up 2-1 with 13:44 left in regulation after Packer forward Corbyn Jenkins took a pass and buried the puck just inside the left pipe.

Despite the lack of experience with close games at state, Thief River Falls displayed the confidence of a veteran squad when faced with adversity.

“I could hear it on the bench, ‘we’re going to put up one more. This game is ours’,” Restemayer said.

The Prowler bench turned out to be right when junior defenseman Briana Jorde went five-hole on Packer goaltender Sydney Conley with 1:42 left in the game to give her team the 3-1 lead.

With Jorde sealing the victory with her goal, the Prowlers are set to play for their first state championship, Saturday. As they look to make history themselves, they hope to end a historic storyline for the Blake Bears.

“We are trying to make a history for ourselves and be that team to win the state tournament. But it would also be kind of nice to be that team that ends Blake’s [two year] streak.”