No Experience? No Problem 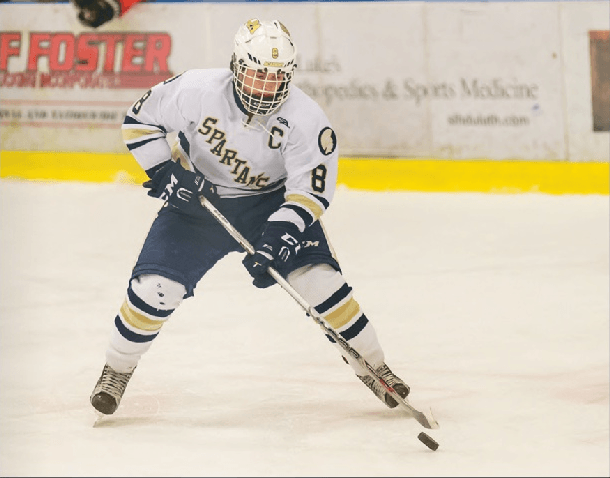 St. Paul Academy senior captain Justin Jallen said the Spartans entered the Minnesota State Boys Hockey Tournament having no idea what to expect. And why shouldn’t they? SPA was preparing for its first state tournament game in school history.

“But I think we handled it perfectly,” Jallen said. “We did what we needed to do, we thought we were the better team and we played like it and we got the win.”

The fourth-seeded Spartans (24-5-0) did indeed get the win, a 4-2 triumph over St. Cloud Cathedral on Wednesday night at Xcel Energy Center. Sophomore Dev McCabe notched the game winner, his second goal of the game, with 5:05 remaining in regulation.

But it was Jallen who was all over the ice wreaking havoc on the fifth-seeded Crusaders (20-8-1) and tied with McCabe for the team lead in shots with six. He captains a young SPA team which rolled through section playoffs outscoring opponents by a cumulative 20-3.

“He’s been bringing it for four years,” St. Paul Academy coach Matt Funk said of Jallen with his voice cracking ever so slightly. “When he plays the game like he did tonight, smart, getting it wide, not trying to play the one-on -one game, there’s not a lot of guys that can stop him. For the last three weeks he’s put the team on his back and said,’Let’s go boys.'”

“Big players step up in big games,” Funk added. “I’ve got a team full of them in the locker room next door.”

Despite a heavy shots edge (43-14 for the game) the Spartans found themselves embroiled in a tight scoring battle with the Crusaders leaving the teams tied 2-2 in the third period.

Cathedral’s Logan Neu scored the first of his two goals at 13:21 of the first period but SPA responded with McCabe’s water-bottle blaster just 2:15 later. When the Spartans assumed the lead a 13:16 of the second, it was Neu who tied it up a mere 44 seconds later.

“That was huge for us,” Neu said. “I think our bench finally got up and we were pretty excited and that motivated us. But we’ve just got to keep going the full game and I don’t think that happened tonight.”

But heading into the second intermission tied, despite a 27-12 shots advantage, only served to make St. Paul Academy even more determined.

“We’re resilient,” Funk said. “They just keep battling. I walk into the locker room and it’s nothing but positivity.”

Jallen said SPA’s approach to the third period was a simple on: Keep shooting the puck.

“We were maybe 10 minutes into the third and they had about one shot, we had about 14, so we knew we just had to keep peppering their goalie and eventually the puck would go in.”

The Spartans executed the plan to perfection, outshooting Cathedral 16-2 over the final 17 minutes including McCabe’s game winner and Jallen’s 125-foot shot into an empty net to seal the win.

Funk has been around the game enough to know that contests like this are often decided by a fortunate bounce which pays no attention to who happens to be carrying the play at the time.

“But the way these guys played, it was relentless,” Funk said. “It made me calm, it made me confident.”

“Obviously we didn’t feel like we were playing our best but we felt like we were still in the game,” St. Cloud Cathedral coach Derrick Brown said. “To be 2-2 going into the third period we liked our chances. I thought we had a couple breaks there that could have gone either way and, obviously, they got the all-important third goal and that’s disappointing but I’m still really proud of the effort and just proud of these guys.”

That the Crusaders were still in the game had much to do with goaltender Keegan Karki who Brown referred to as “a special kid” after his 39-save performance.

“I think tonight he showed what he’s all about,” Brown said. “Just a sophomore, a young kid, but really played poised. SPA came with an onslaught of speed and shots and he really was strong throughout the game.”

“I don’t think we saw a team that fast this year,” Neu said. “They really had some small guys that could use their feet and get around us.”

The Crusaders will face Litchfield/Dassel-Cokato at noon on Friday in the consolation bracket semifinals at Mariucci Arena. St. Paul Academy earned itself the opportunity to take on the No. 1 seed Hermantown Hawks on Friday afternoon in a game scheduled for 1 p.m. at Xcel Energy Center.

“For me, it’s probably going to be the biggest game of my life so far,” Jallen said. “But we’ve just got to look at it as any other game. I think we’ve seen that with our team speed and our team chemistry we can skate with anyone, we can play with anyone.”