With Marc-Andre Fleury acquisition, Bill Guerin is indeed all about winning 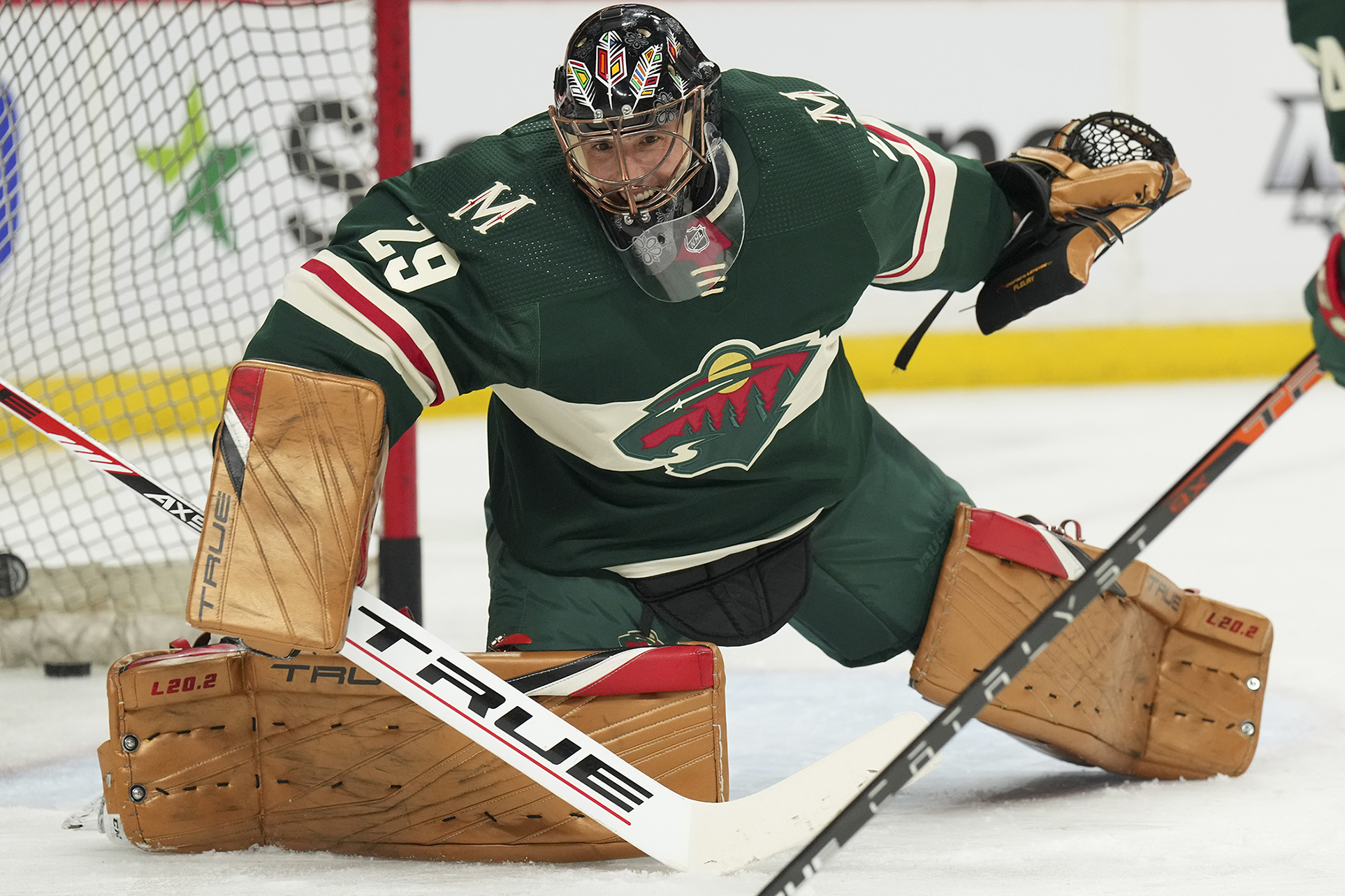 Marc-Andre Fleury in action in warmups prior to backing up Cam Talbot in his first game in a Minnesota Wild sweater. (MHM Phot / Rick Olson)

Bill Guerin has made it clear since becoming general manager of the Wild in August 2019 that there is nothing more important than winning and every move he makes will be focused on accomplishing that goal. Whether that was trading a fan favorite like Jason Zucker, jettisoning two of owner Craig Leipold’s favorites, Zach Parise and Ryan Suter, or using creative language to correct an answer from captain Jared Spurgeon, Guerin’s primary priority has never been in question. 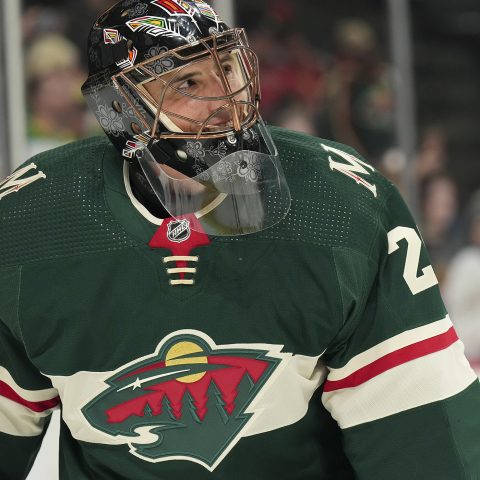 So it should have come as no surprise that Guerin again showed that being good isn’t good enough as he made multiple deals before the NHL trade deadline on Monday. The biggest landed future Hall of Fame goalie Marc-Andre Fleury from Chicago for a conditional second-round pick that will become a first-rounder if the Wild reaches the Western Conference Finals and Fleury wins at least four games in the opening two rounds. (Guerin would happily walk that first-round pick to Chicago if that happens.)

These guys have done their part to today, so I have to do my part. — Wild GM Bill Guerin

There had been some feeling that Guerin might not want to make too many changes because the Wild had become a cohesive team and sending players packing, or having guys come in and take their jobs, might not be the best idea with the playoffs around the corner. Guerin, however, didn’t win two Stanley Cup titles as a player, including one with Fleury in 2009, and two more as an executive with the Penguins by worrying about whose feelings were getting hurt.

Is disrupting chemistry something that Guerin had to consider? Of course. But far more important was bringing in guys who can help the Wild capitalize on what has looked like a special season at times but also featured some troublesome bumps in the road. 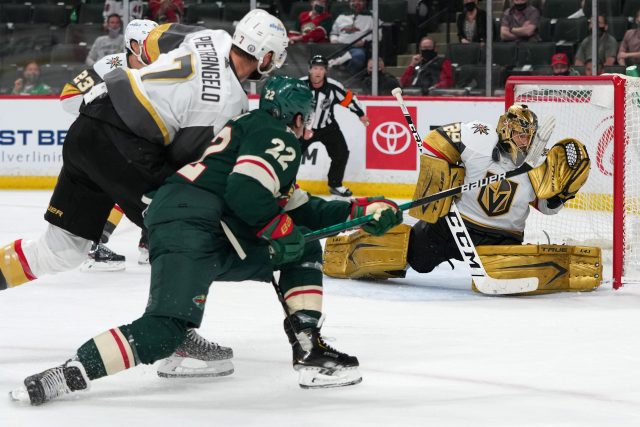 Fleury denies Kevin Fiala en route to a 35-save, 4-0 win over Minnesota in Game 4 of the Wild’s Stanley Cup playoff first-round series with the Vegas Golden Knight’s on May 22, 2021 at Xcel Energy Center. (MHM Photo / Rick Olson)

It would have been far more concerning if Guerin had done nothing in goal after starter Cam Talbot and Kahknonen failed to show the type of consistency needed for a team that wants to make it past the first round. By many measures, the Wild goaltending situation couldn’t be trusted. Fleury, 37, posted a 2.95 goals-against average and .908 save percentage in 45 games, but that was playing behind a bad Chicago team that had high hopes when it acquired him from Vegas last offseason.

Fleury was coming off a season in which he won the Vezina Trophy with the Golden Knights. He posted a 1.98 goals-against average and .928 saves percentage and then played in all seven games in the opening round as Vegas eliminated Minnesota. It was Fleury who also helped lead the expansion Golden Knights to the Stanley Cup Finals in 2018.

The 18-year veteran is considered hockey royalty and one of the better locker room guys in the sport. Fleury should be rejuvenated in Minnesota and the Wild locker room should be equally excited to add a player many members of the Wild probably looked up to as kids.

It was on the opening day of training camp this season that Guerin addressed the team in a clip that caught the attention of many. The GM asked his players if they “knew what this was all about?” Silence followed until Guerin called on Spurgeon. “Hard working and having fun,” Spurgeon responded. The words had barely gotten out of Spurgeon’s mouth when Guerin snapped back, “(Bleep) that. This is about winning.” 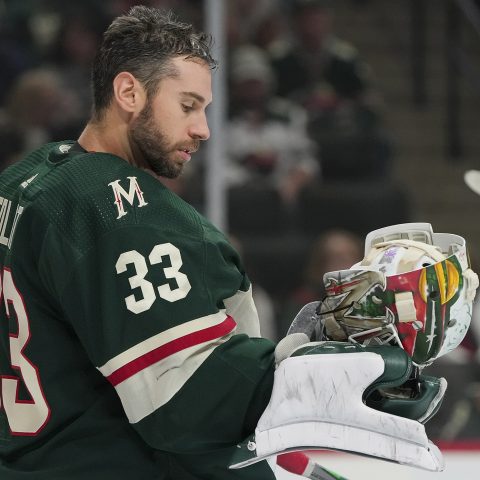 Much remains to be expected from Cam Talbot, both in the crease and in the dressing room, for the Wild to achieve postseason success. (MHM Photo / Rick Olson)

Assurances were given shortly thereafter that there was nothing staged about this moment. Spurgeon had responded with what he believed to be the correct answer and one that for years probably would have been tolerated by a franchise that was used to quick playoff exits. But if Guerin was serious about his response he needed to do more than pay lip service to the stated goal. He needed to provide action that will knock Talbot into a backup role, that will cost a fourth-line winger his spot and also put a top six defenseman into the press box.

The Wild had gotten off to a 19-5-1 start that put them in first place in the NHL and had a 9-0-1 run at another point. But it had become clear the Wild needed help in net — Talbot’s five-game winning streak was nice but didn’t change Guerin’s mind — and needed to be bigger, meaner and tougher to have a chance in the postseason.

Middleton brings size (6-foot-3, 219 pounds) and is a shutdown defenseman. Deslauriers will take care of anyone who happens to bother Kirill Kaprizov, meaning Marcus Foligno can focus on staying on the ice. The teams that pushed the Wild around in recent weeks have been put on notice, and the high-flying Avalanche now will have to watch their backs against the Wild.

This provides no guarantees the Wild will make a run in the postseason, but it does reiterate Guerin’s message: Bleeping winning is more important than anything else.