No More Sleeping In 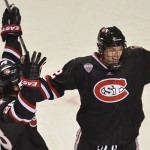 ST. CLOUD – It happened just as it did in a pair of victories at North Dakota; and just like it did in a tie against an overmatched Bemidji State team earlier.

St. Cloud State fell behind, woke up and came from behind to salvage a point; this time with a 2-1 win in the second of two games against Miami last weekend at the Herb Brooks National Hockey Center.

Miami took a 1-0 lead into the second period, extending Ryan McKay’s scoreless periods streak to eight after the RedHawks blanked the Huskies 2-0 Friday.

But Garrett Milan tied the game early in the second period and David Morley broke the tie with 9:08 left in the game and the Huskies held on.

“When we’re down early, nobody panics and we know there’s plenty of time left,” Morley said Saturday. “We’re just patient and we’re not jumping too early because we’re forcing things.”

The Huskies held their No. 3 ranking in this week’s USCHO.com poll and will travel to 0-8 Alabama-Huntsville for a nonconference series Friday and Saturday.

Slow starts and strong finishes have been trends that have led SCSU to its 6-1-1 record. The Huskies have trailed after one period in all three of their NCHC wins.

“We have a lot of guys who can score goals and they haven’t been doing it,” SCSU coach Bob Motzko said. “We’re having success so they have to get their mind off of it. They’ll score again and they’ll score a lot.”

Bemidji State was up 2-0 on the Huskies after 42 minutes in a nonconference game the first weekend of the season. That game ended in a 2-2 tie.

SCSU swept its NCHC opening series at North Dakota Nov. 1-2, but not after it took early deficits and didn’t score until at least halfway through each game.

Scoreless through two periods in the first win at UND, the Huskies potted three straight goals to earn a 3-2 win.

Down 1-0 the following night SCSU got two quick goals in the second period to take the lead for good.

“We need our power play to get going and that’s going to be a big difference,” Morley said. “That’s been a problem for us. We should be potting a couple (goals) and getting early leads on the power play.”

The power play has been dormant since Oct. 26 when SCSU last scored on the man advantage. The Huskies have gone 0-for-17 on power plays without a goal in either series against UND or Miami.

While the offensive struggles continue, Huskies goaltender Ryan Faragher is one of the main reasons SCSU is still among the nation’s top teams.

“He’s been very solid but he has to stay focused because there have been a couple leakers that have gotten through,” Motzko said.

“He wants the challenge and become a big time goaltender. He’s given us a chance to win every game.”