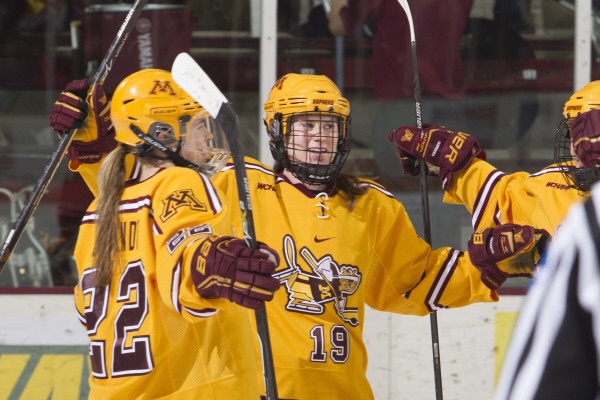 MINNEAPOLIS- Saturday’s game at Ridder Arena brought out early the simple lesson of “if at first you don’t score, shoot, shoot some more.”

No one helped adhere to that more than freshman forward Kelly Pannek.

“No one was happy with the shootout win,” said Pannek, who had three points (1G-2A) to extend her nation-leading first-year total to 38 and was one of three players to have 6 shots Saturday. “We just weren’t satisfied with our play yesterday.”

Minnesota was able to out-work and shut down the Buckeye women’s speed, making the road team skate on their heels in a 3-1 victory.

The Gophers  out-shot Ohio State 17-1 in the first period and 44-17 total. Possessing the puck for long stretches early – doing so despite finishing the game with 9 forwards – Minnesota made the necessary adjustments in the second game of the series to counter OSU’s unique forecheck. The Buckeyes were able to get players in front of rebounds and clear the zone in order to stay in the game.

It took until midway through the second period before coach Brad Frost’s team had breathing room on the scoreboard. Pannek burst the dam open with a shot on a 4-on-1 attempt that went off OSU goaltender Kassidy Sauve and into the net.

“We were just trying a lot of stuff to get the puck on net,” said Pannek. “Especially on rushes, if there are people going something good should happen. There were a lot of rebounds I thought throughout the period and the whole game so we were just focusing on getting pucks to the net.”

Pannek and senior defenseman Rachel Ramsey, who had a pair of assists Saturday, were also both part of Minnesota’s first goal. From her own one blue line to the other, Pannek found sophomore Kate Schipper mid-stride on a breakaway.

She did the rest, scoring her fifth goal of the season on her own rebound 8:57 into the game.

“Great finish there by Schipp,” said Frost. “That was a big goal for her, she needed it. She’s been fighting it a little bit.”

Getting the nod in net in place of Stacy Danczak, Sauve made 23 saves on 24 shots prior to Pannek’s goal in the second period. Hannah Brandt made it 3-0 with 5:10 remaining in the second period when the Vandais Heights, Minn. native needed all of 15 seconds to get her 24th goal of the season from the face-off dot.

“We’ll take Hannah shooting from there every time,” Frost said.

Sauve’s counterpart in net, Amanda Leveille, made 16 saves Saturday. She was barely tested until early in the third period. The junior goaltender was able to stop a partial shorthanded breakaway by Julia McKinnon. She wasn’t as fortunate minutes later during a stretch of 4-on-4 when Claudia Kepler roofed a misplayed puck in front of Leveille to break the shutout.

The Buckeyes had a chance to make it a one-goal game with two power plays in the third, but Minnesota killed both with Ramsey in the box and without forwards Meghan Lorence and Paige Haley.

Replaced by Schipper on the second line, Lorence did not play past the early shifts a night after getting injured and is day to day. Haley had to be helped off the ice in the third period when she was checked by Sara Schmitt. She will be evaluated further in the coming days.

Losses in the ranks aside, it’s a happier group of players. Minnesota heads to North Dakota next weekend with a 10 point lead in the WCHA standings over Wisconsin and home ice in the playoffs with six regular season games remaining. Even better is that they are doing so with the work ethic and effort shown Saturday.

“Any time you show up on the score sheet you can walk away feeling like you did a good job,” said Pannek. “I thought we did a great job today responding. Everybody was ready to go from the drop of the puck to the final whistle, which was huge for us.”