No Parise, no goals

Offense sputters putting Minnesota on the brink of elimination 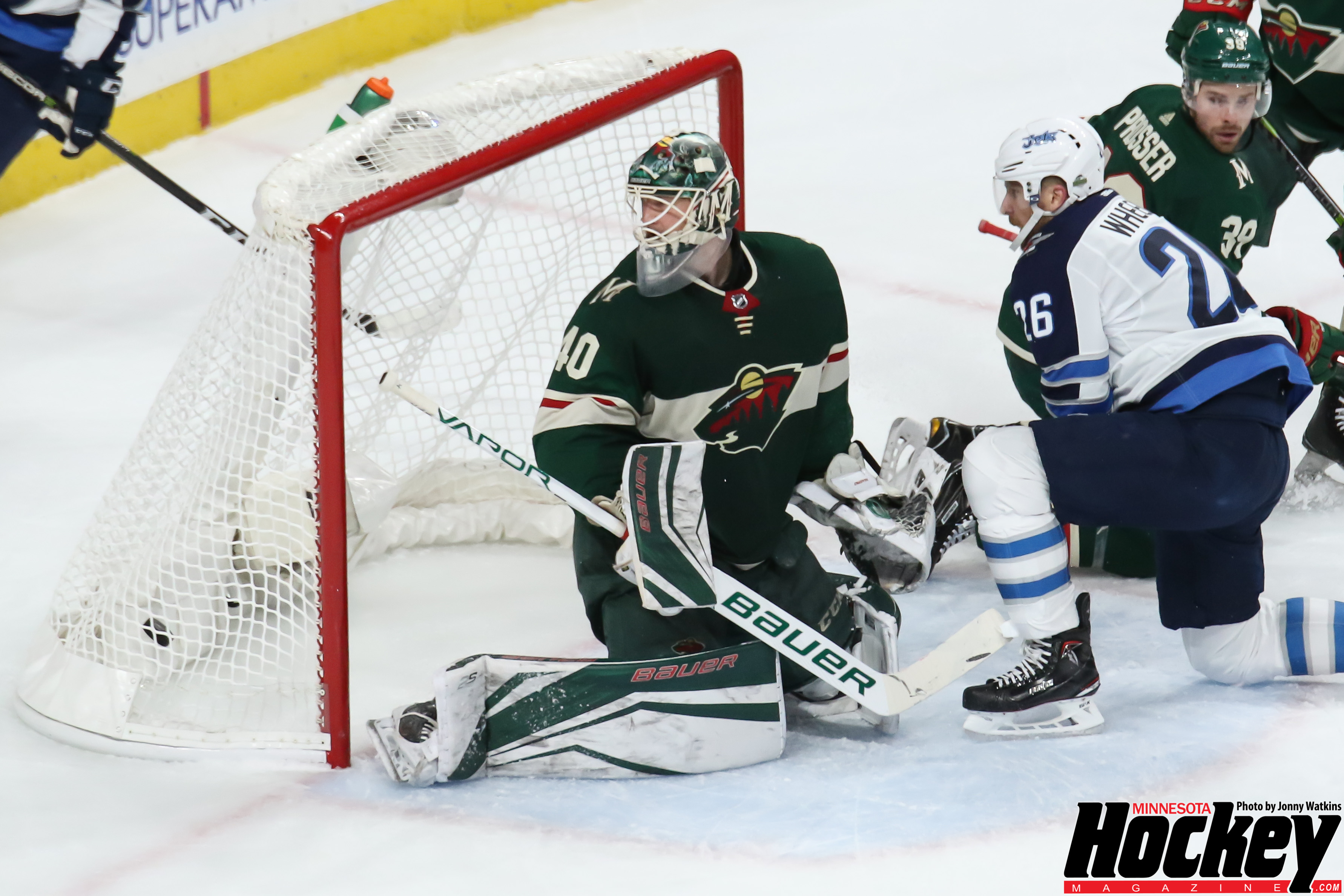 Winnipeg’s Blake Wheeler watches the first of two Mark Scheifele goals hit the back of the net in the first period of the Wild’s 2-0 loss to the Jets on Tuesday night at Xcel Energy Center. (MHM Photo / Jonathan Watkins)

Offense sputters putting Minnesota on the brink of elimination

St. Paul – Is it too soon to suggest that the undermanned Wild — they are missing $196 million worth of talent in Zach Parise and Ryan Suter — are simply no match for the Winnipeg Jets?

Yes, the Wild dropped a 2-0 home ice decision to the Jets Tuesday night and trail 3-1 in the best-of-7 playoff series, but Boudreau insisted that the Wild are not finished.

He has to be optimistic; he’s the coach.

Game 5 is Friday in Winnipeg, where the Jets have won 34 of 43 games since the start of the 2017-18 season, and after they shut down Minnesota in Game 4 in front of 19,277 antsy Wild fans, the Wild will need to win three straight to advance.

The Wild outshot Winnipeg for the first time in the series Tuesday, but were unable to muster a goal againt Jets goalie Connor Hellebuyck, who was pulled after two periods in Minnesota’s 6-2 win two nights earlier.

“You knew five or 10 minutes into that game that he was ready and feeling good,” Jets coach Paul Maurice said.

In Parise’s absence, someone needed to pick up the slack. Well, Jason Zucker, Mikael Granlund, Jordan Greenway and Tyler Ennis each managed just one shot on goal while Marcus Foligno, Matt Cullen and Daniel Winnik each had zero.

Nevertheless, Boudreau pointed out, the Wild battled their tails off and might have taken the game into overtime if not for what Boudreau and everyone in Minnesota’s dressing room called a blatent missed call.

The Wild were controlling the puck on the power play late in the first period with the score 0-0 when Eric Staal, stationed between the circles, got flattened by a cross-check to the neck from Winnipeg defenseman Josh Morrissey.

Staal lay on the ice for a moment, finally got up on one knee, then skated slowly off the ice as play continued.

“He cross-checked me,” Staal said. “Everyone saw it. I don’t know how no one with stripes saw it.”

“My take,” Boudreau said, “is the same take that everybody in the building saw. The refs looked at it and they decided not to call it because we were already on the power play.

A five-on-three manpower edge might have enabled the Wild to score first, but two additional factors stemmed from the non-call, Boudreau noted, because Morrissey very likely would have been ejected.

First, Morrissey got an assist on the only goal of the first 59 1/2 minutes late in the first period, and second, he made a sterling defensive play to knock the puck off the Nino Niederreiter’s stick to prevent a breakaway later in the game.

An empty-netter capped the scoring with 11 seconds remaining.

“It should have been a 0-0 game going into overtime,” Boudreau moaned.

The first goal — both Jets goals were scored by Mark Scheifele — was all the Jets needed on this evening as their defense yielded hardly an inch all night.

“We didn’t give them a whole lot of ice tonight to stretch out on,” Maurice said.

Especially in the third period, when the Wild tried to push the pace but managed just nine shots on goal.

“They really dug in,” Boudreau said. “They were really good in the third period.”

Staal, Dumba, Granlund and one or two others had Minnesota’s best chances, but Cullen said the team needed to play with a bit more desperation and “we didn’t have enough.”

Parise and Suter are still out. Game 5 is in Winnipeg, where the Jets practically toyed with the Wild in the first two games of the series. Is it over?

“We’ve just got to re-focus and try to get a win,” rookie defenseman Nick Seeler said. “It’s far from over.”

He has to say that, but actually, it’s very close to over … unless the Wild can spring an upset in Game 5 and force a Game 6 back at the X on Sunday night.