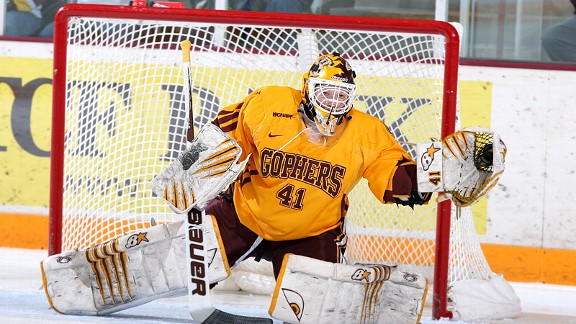 By Mollyhall Seeley
The Pink Puck

Vinny Prospal retired late last month. He had played 16 seasons in the NHL, jumping Jagr-like from team to team, first with the Philadelphia Flyers and eventually the Columbus Blue Jackets. He was born in 1975–a good year for hockey, and for the Flyers in particular, who made it all the way to the Stanley Cup Finals. They were turned away by the Montreal Canadiens, but Reggie Leach won playoff MVP. The Habs’ Guy Lafleur was the season’s top scorer but the Flyers’ Bobby Clarke won season MVP.  Mel Bridgman made his NHL debut after being selected first overall, and fourteen seasons later he retired. In 1992, he was was named the first General Manager of the Ottawa Senators, for whom Prospal played from 1998-2001.

By the time he announced his retirement, Vinny Prospal had skated on a lot of different ice and called a lot of different rinks “home.” He had been to Turin and taken home a bronze medal. He had played 1,108 games in the league, all told. He is 38.

Noora Räty is 24. She played 139 games for the Minnesota Gophers and won 122 of them, including a perfect season in 2012-13, where she recorded 17 shutouts and a .95 save percentage. In a 38-game season, Räty let in a mere 36 goals, giving her a 0.96% GAA. She made the Finnish National team at age 15 and helped them win bronze at 21, making 16 saves for a win over Sweden. She won the IIHF World Women’s Championships Best Goalie in 2007 and 2008 and MVP in 2008 (Hayley Wickenheiser, current captain of Team Canada and flag-bearer at Sochi’s Opening Ceremonies, won the year before).

She has 41 career shutouts in the NCAA–a Division I record. Earlier this year, The Hockey News ranked her as one of their People of Power (at #63). They wrote, “Räty ha[s] the ability to be the tournament [in Sochi]’s most influential player. She [is] the person capable of derailing a juggernaut almost singlehandedly.”

It’s not speculation. Räty shut out Team USA–who has never left the World Championships without a gold or silver medal–in the 2008 World Championships with 30 saves. Räty’s shutout came the same year that the American team beat the Canadians for just the second time in 11 matches; in other words, an already-juggernaut team at their absolute strongest.

“As long as I get a shutout, we can’t lose,” Räty told the Minnesota Daily last March.

Noora Räty is among the best goalies in the world, male and female. She is 24.

This is Noora Räty:

What’s remarkable about this save isn’t that Räty didn’t fall for the deke; it’s that she did. You can see her glove hand going up, reaching for a puck that isn’t coming. It’s like she’s isolated her different muscles, like each of them can react independently to one another. Räty’s glove hand is falling for the deke while her leg knows better. She makes two saves at the same time.

A goalie like that would go first round in the NHL draft, if she were lucky enough to have been born with a Y chromosome. A goalie ready for the international stage at 15, who can be fooled and unfooled at the same time, a goalie who can carry her team in her glove, would barely languish at all in the AHL. A goalie like that would be hailed as the next Ken Dryden, the next Patrick Roy, the next Martin Brodeur.

Brodeur, by the way, is 41. He has played 21 seasons with the New Jersey Devils. Roy retired after 18 years in the NHL, first with the Canadiens and then the Avalanche (for whom he is now coach and Vice President of Hockey Operations). Dryden played just seven seasons with the Habs, retiring at 31. The decision to retire was his own; he was ready for different things. His life as a hockey player had run its course.

Compare that to Räty, whose announcement on Twitter today told a different story:

…As much as I would love to just play the game I love and that has given me so much, I have to choose a work career (unless I can make a living from playing). Why? Because who would then pay my rent, car loan and insurance, and other bills? I’m 24-years-old, out of college, single, and the money doesn’t grow in [sic] trees so yes you are right, the answer is no one. I’m done living from hand to mouth and now it’s time to start building wealth and think[ing] about my future. And I’m not the only player having this problem… the majority of female players have the same problem.

Noora Räty is not retiring because she is finished with hockey; she is retiring because there is nowhere for her to go. I wrote earlier this week in “Women’s Olympic Hockey: Why Gold Matters” about how limited a woman’s hockey options are, the farther along she gets in her career. Despite being one of the fastest growing women’s sports in the world, when it comes to making a living, even the most extraordinary players are brought up short.

The Canadian Women’s Hockey League (CWHL), full of talent and empty of funds, cannot pay its players. Russia has an 11-team professional woman’s league, but the league suffers from the same curse that plagues the CWHL–the same plague that follows women’s hockey (and women’s sports) everywhere: underfunding, underexposure, and a near-total lack of engagement outside of Olympic years.

Throw a stone in most places and you’ll hit five separate hockey programs for little boys; throw a boulder and you’ll still miss the single female hockey program as it rounds a corner. A 2009 study of coverage by gender in ESPN The Magazine published in the International Journal of Sport Management found that:

The problem is that readership is as much dependent on content as it is determined by content. Maybe most women don’t spend a lot of time reading ESPN The Magazine,  but why should they? People like them aren’t in it. A woman sports fan has to read 1,375 articles to find a story about someone whose gender identity matches hers. Writing for dudes about dudes creates a feedback loop that doesn’t allow for growth in either direction. As the same study points out, “the media are seen as influencing people’s leisure choices because of their ability to cultivate images and perceptions of what’s popular and attractive … for those sports that are under-represented, awareness and efforts to build fan bases are often much more difficult.”

Getting fans there is half the battle. Once they’re in the building, they’ll bring their wallets, they’ll buy beer and t-shirts and season tickets. They’ll grow loyalties and cultivate favorites; they’ll spend hours on the pond with their daughters talking about the game they saw when they were younger– “Oh man, honey, you should have seen it–Wick with the puck and Räty in goal, I swear the whole stadium stopped breathing…”

In other words: if you build it, they will come.

There’s a caveat in this story, which is that Noora Räty is not actually retiring from hockey.

She is retiring from women’s hockey.

I will hang up my skates for good if I can’t play professional hockey IN A COMPETITIVE LEAGUE next season. I said competitive league because I could always go play in the Russian women’s league … [however, after] playing a few games there myself in January, I don’t think this league will challenge me enough[…] But I play hockey because I love to get challenged as it drives me to get better as an athlete and goalie.  Thus, I would love to take on the challenge and try playing with men since I can’t play college hockey anymore and there’s no professional league [that pays its players] in North America. But I guess time will show if some men’s pro team is willing to give me a chance.

Räty wouldn’t be the first female player to play on a team with the boys; Manon Rhéaume was the first women to play in an NHL game (for the Tampa Bay Lightning in 1992) and Hayley Wickenheiser played on both Finnish and Swedish men’s teams (she also turned down an offer from Phil Esposito to play for the Cincinnati Cyclones in the ECHL). Hilary Knight, in an interview after the USA/Canada game on Wednesday, talked about going to Sweden to play in the men’s league over there. When asked whether she wanted to play with the boys, Knight grinned big and said, “Oh, yeah.” 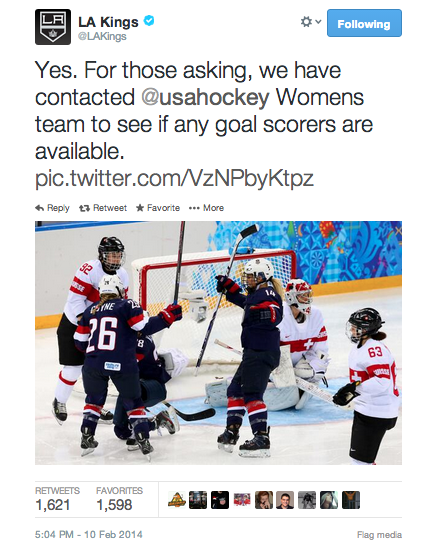 The problem with this joke is that not a single player on the USA Women’s Olympic Hockey Team has a chance to make even the NHL’s minimum salary of $525,000 playing their sport and doing it better than many of their male counterparts.

The problem with this joke is that Noora Räty has to retire so that she can pay her car loans.

Gender integration isn’t something that has ever made it too high up on the NHL’s To Do List. They are more worried about whether players should be allowed to tuck their shirts in, and trying to figure out what arbitrary line in the sand would mark the difference between Just Part of the Game Violence and We Are About To Get Super Duper Sued Violence. Technically, there is nothing stopping women from playing in the NHL, except that they are rarely given the chance.

Women’s hockey has peculiar pressure points. Checking isn’t allowed, technically, but it still happens; the match-up between the USA and Canada on the 12th proved that. Still, there are no Broad Street Bullies, no Big Bad Bruins. There is no such thing as an enforcer, or at least, not in the way that the NHL understands the term. You can’t make a living off your fists in women’s hockey because you can’t use your fists. Even players whose main job is to play the enforcer-type role has to be able to contribute at the technical level. (Also, of course, you can’t make a living in women’s hockey at all.)

The game has evolved to put high focus on stick-work and skill. Essentially every player on the team has to be able to perform the kind of puck-handling madness that players like Patrick Kane and Sidney Crosby do in the NHL. That’s not because women can’t fight, or learn the right way to absorb a hit; it’s because that element was taken out of their league’s game, and they had to compensate.

(Well. For the most part.

They’re only human, after all.)

Of course, gender integration of the NHL is not the answer to the problems of the CWHL–or women’s hockey in general. As Brenda Andress, Executive Director for the CWHL, told the Toronto Star, “We’re not the NHL and we’re never going to be, nor should we be, we have a very different game.” Räty herself doesn’t even call for it; instead, she writes that she believes the best hope for the future of women’s hockey is to build up the North American women’s leagues to a competitive level. Women’s hockey–women’s sports–already have the players. They have the heart and the hands and the heads.

Someone just has to build the stadiums up around them.

To learn more about Mollyhall Seeley and read more of her work, visit her bio page at ThePinkPuck.com/author/mollyhall/