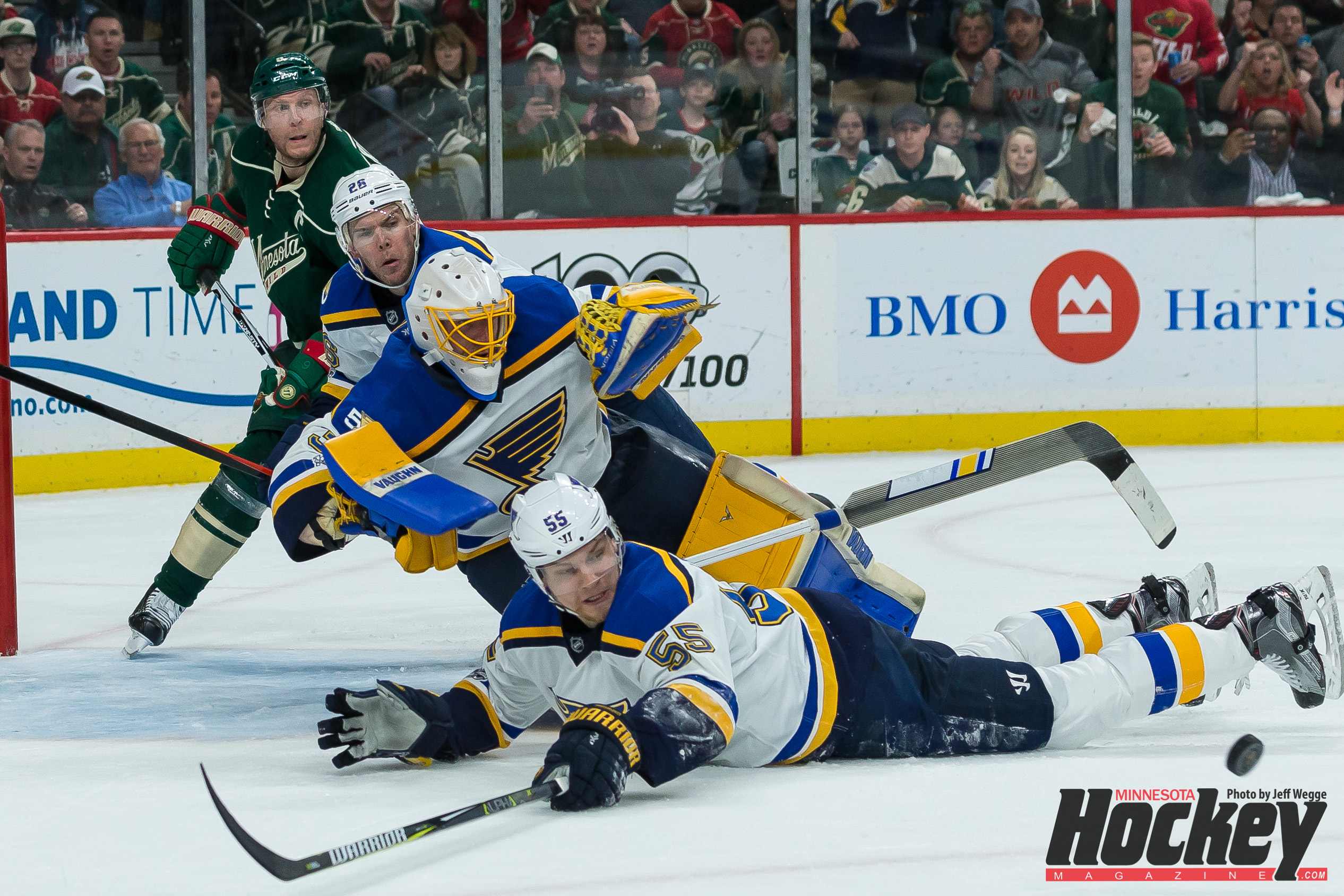 The 4-3 overtime decision delivered a stunning 4-1 series victory for the underdog Blues, who moved on to the Western Conference semifinals and left Minnesota’s personnel shaking their collective heads.

“They weren’t the better team,” Boudreau said, “but they won four games.”

On Saurday, Minnesota rallied from a two-goal deficit to force overtime in front of 19,228 cheered-out customers at the Xcel Energy Center, but for the fourth time in five games the often outplayed Blues found a way to come out on top.

“I thought in many games we had the momentum, we had our chances and we were close,” Wild captain Mikko Koivu said, “but not enough. Somehow they always got that winning goal or that lead.”

In this game, the Wild gave up a 2-0 lead and eight of the first 10 shots on goal, then stormed back to outshoot the Blues 37-27. But Blues goaltender Jake Allen stopped 34 shots for his fourth win of the series.

“When the heat is on, when the pressure is at its highest,” Blues coach Mike Yeo said, “he delivers.”

The series victory must have been a heady experience for Yeo, who was fired as Wild coach 14 months ago, became associate head coach in St. Louis this season and then took over the Blues’ helm 10 weeks ago.

Few would have criticized had he elected to gloat, but instead he tipped his hat to the Wild organization.

“Everybody there is first class,” he said. “They’ve had an unbelievable year.”

Certainly it was a fine season, but the franchise-best total of 106 points carried no weight in the postseason.

“That’s kind of the last thing to think about was how good our regular season was,” forward Zach Parise said. “It’s a disappointing finish.”

Koivu noted that the Wild followed their outstanding season by competing hard and playing well against the Blues. But, he added, “just not good enough.”

“We battled hard — that’s one thing that we’ve gotta take credit for is really battling — and so did they,” Zucker said. “This series, they were the better team.”

Goals by Vladimir Tarasenko and Alexander Steen just 3:16 apart gave St. Louis a 2-0 lead, but Wild defenseman Ryan Suter cut the deficit to 2-1 late in the period. Paul Stastny’s third-period goal made it 3-1 and the Wild had a goal disallowed because of goaltender interference before Koivu and Zucker finally tied it up.

Minnesota outshot the Blues 26-12 in the second and third periods and the big crowd was on its feet for overtime, stoked for the possibility of one more good thing.

Instead, Magnus Paajarvi beat Devan Dubnyk for the deciding goal 9:42 into overtime.

Falling in the first round of the playoffs, Suter said, leaves everyone on the Minnesota contingent with a bad feeling.

“I felt we deserved better,” he said. “Obviously, the results weren’t there, and it’s a game of results.”

Forward Erik Haula, who was bumped up from the fourth line after Eric Staal was injured crashing into the end boards late in the second period, said Minnesota’s players are growing weary of not gaining steam in the playoffs.

“It’s tough business,” Boudreau said. “It’s tough to win. That’s why there’s only a certain amount of teams that have won in the last 20 years.”

In this series, Minnesota lost 2-1 in overtime and 2-1 in regulation on home ice, then 3-1 in St. Louis before bouncing back to win 2-0 on the road. They were trying to become one of the few teams to rebound and win a Stanley Cup Playoff series after falling behind 3-0.

It was a hill that was simply too steep.

“When you’re down 3-nothing in the series,” Parise noted, “you’re really asking a lot. Not that we quit — we never quit, we tried, we played hard all the way ’til the end — but, like I said, right now it’s just a disappointed group of players.”