Not much beats a win over Blackhawks

Wild start fast and finish off Chicago in third 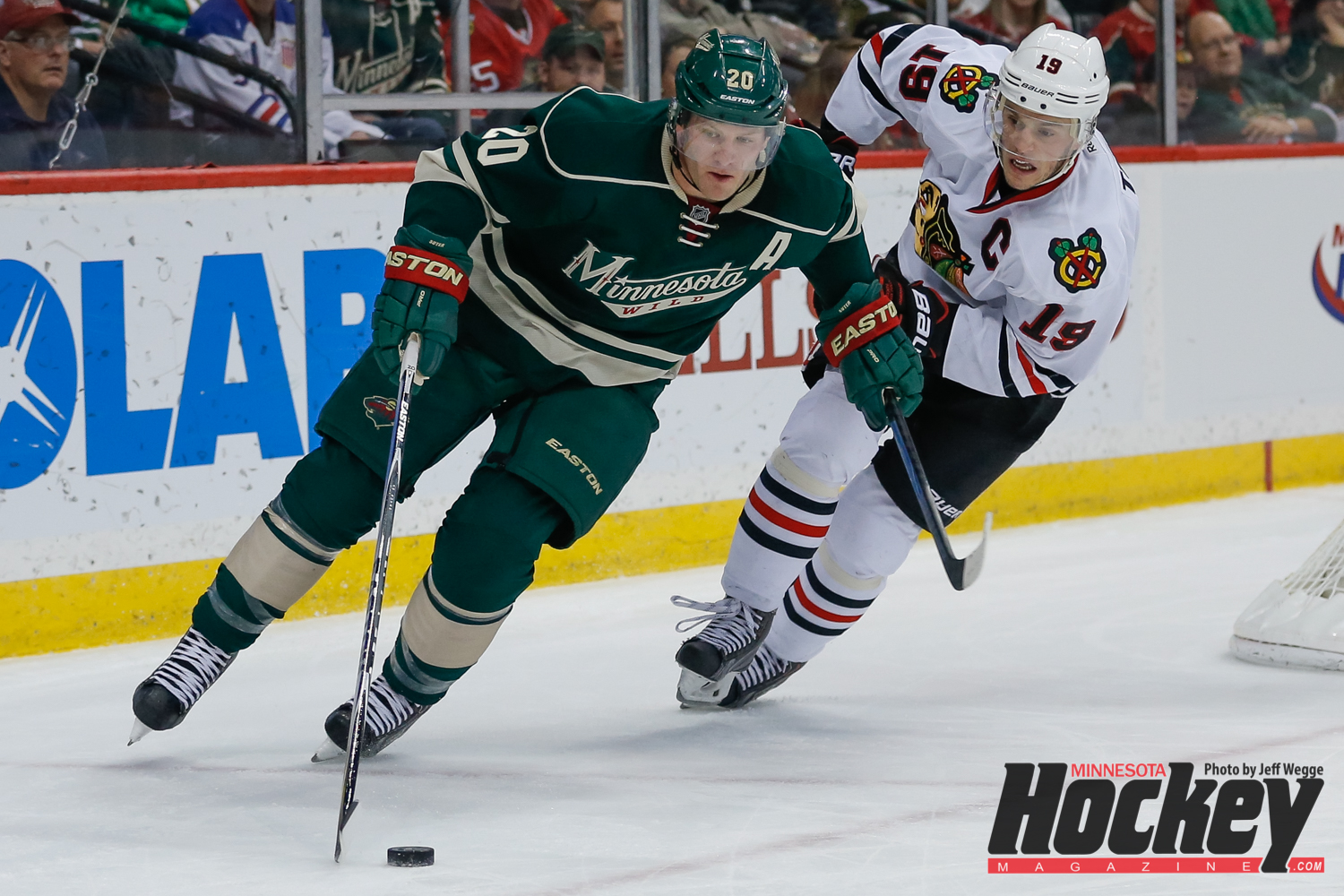 With an assist on Jason Zucker’s goal in Minnesota’s 5-4 win over the Blackhawks on Friday night, Wild D Ryan Suter owns 31 points (4-27–31) in 58 games vs. Chicago, his highest point total against any team. (MHM file photo / Jeff Wegge)

Wild start fast and finish off Chicago in third

Every one of the 19,140 customers at the Xcel Energy Center Friday night received a particularly high quotient of entertainment.

The Chicago Blackhawks were in town.

The visitors ended Minnesota’s NHL season the past three years in a row, ratcheting the rivalry between the Central Division teams back into the vicinity it was when Neal Broten and Dino Ciccarelli played for the North Stars against Chicago guys named Secord, Savard and Sutter.

Consequently, it was appropriate that the Wild brought in former North Stars goalie Don Beaupre to lead the “let’s play hockey” cheer.

And this one started with a bang: Just 18 seconds after the opening faceoff, Jason Zucker drilled one for Minnesota.

Zucker’s early goal was his second on game’s the first shift in a week. Mikko Koivu recorded three assists to up his point total to a team-high 11, Marco Scandella picked up two assists, Zucker added an assist and goalie Devan Dubnyk stopped 25 of 29 shots to raise his record to 7-2.

Minnesota’s 5-4 victory, which included the Wild getting the game-winner from Nino Niederreiter just 32 seconds into the final period, had something for everyone.

The foe was the defending Stanley Cup champion Blackhawks.

Each matchup between Chicago and Minnesota seems to offer a little extra appeal.

“It seems like every game will be 1-0 or 5-4,” Dubnyk noted. “It’s a fun challenge, and we obviously were beaten in the playoffs, so any chance we can get one against them is always good.”

The teams careened through 40 minutes with a 4-4 score that had the crowd anticipating something significant at any moment.

“The game was up and down,” said Ryan Carter, who scored his second goal in the past four games. “As a player, these are fun games. I don’t know about the coaching staff – I think they like the 3-2 games more than the 5-4. It’s a fun game; that’s a good team. We have confidence in this locker room, too. I don’t think we want to win every game 5-4, but we’ll take that one.”

Koivu beamed after his team raised its record to 7-2-1.

“We knew the challenge coming in and the type of team they are and the success they had last year, so for sure it’s always a good one to get,” he said.

“A good win,” Wild coach Mike Yeo said. “The crowd was pretty into it tonight.”

Many booed after forward Justin Fontaine took a knee-on-knee hit from Andrew Desjardins and hobbled off, because Desjardins was issued only a minor penalty. Yeo sided with the fans and said later he believed a major penalty should have been called.

The universal opinion in the Minnesota locker room was about the importance of two points against a division opponent because, as Yeo noted, maybe five Central Division teams would be at or near the top of one of the other divisions.

And, of course, this win came against the Blackhawks.

But Yeo cautioned that one win versus Chicago is no cause for celebration.

“We beat them in the regular season last year,” he said. “Until we end their season like they’ve ended ours, I don’t take a whole lot out of it.”