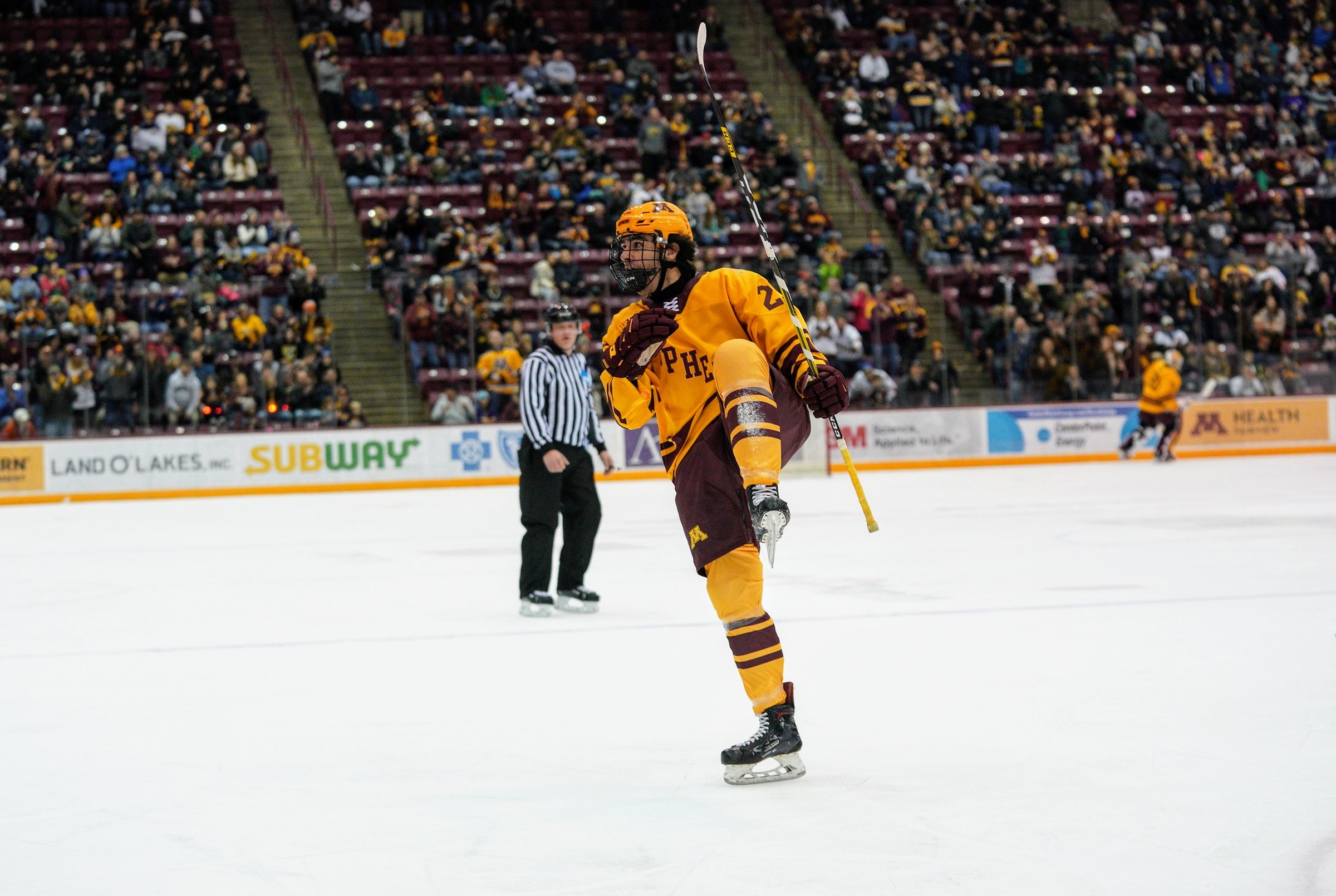 Former Elk River star Jack Perbix celebrates his first goal as a Gopher in the first period of Saturday night’s 5-3 loss to No. 5 Notre Dame at 3M Arena at Mariucci.

Jack Perbix is no stranger to the score sheet. The University of Minnesota freshman winger racked up 121 points in 74 games for Elk River high school from 2015 to 2018.

After finishing his high school career at Elk River in the spring of 2018, Perbix split his 2018-19 season between the USHL’s Green Bay Gamblers and the Des Moines Buccaneers, scoring 12 goals among his 49 points in 60 games. But in his first seven games Gopher he had been blanked other than a pair of assists, although not for lack of opportunity.

“I’ve had Grade-A chances that I want back but after getting that first one, you know, it was definitely monkey off my [back],” said Perbix, a 2018 fourth-round pick (No. 116 overall) by the Anaheim Ducks.

The monkey is gone after Perbix notched his first collegiate goal which gave the Gophers a 2-0 first period lead over No. 5 Notre Dame on Saturday night. But a pair of goals by Eden Prairie’s Nick Leivermann helped lift the Irish to 5-3 win over Minnesota in the finale of the opening weekend of the Big Ten conference schedule for both teams.

Leivermann, picked in the seventh round (No. 187 overall) of the 2017 NHL Draft by the Colorado Avalanche, scored twice in the second period, including a game-tying goal after which the Irish never trailed. The sophomore now has three goals to his credit at Notre Dame with all three coming at 3M Arena at Mariucci.

“We’ve kind of seen what our good hockey can look like; it looks pretty good,” Minnesota coach Bob Motzko said. “We didn’t sustain it tonight.”

The Gophers jumped out out to a 2-0 lead on a pair of first-period goals by Brannon McManus and Perbix 3:39 apart. McManus, a junior, finished a 2-on-1 with Sampo Ranta when he took Ranta’s feed and beat a sliding Morris from the right circle at the 12:34 mark.

Less than four minutes later, Perbix jumped on a loose puck off a turnover forced by fellow freshman linemate Jaxon Nelson and wheeled into the high slot before firing a shot high off the inside of the right post.

“I came across the circle and I noticed that I couldn’t see the goalie’s face and that’s just telling me that he couldn’t see mine,” Perbix said. “So I knew that he was screened and I just picked open net and I hit it.”

“The Nelson line emerged looking like college hockey players this weekend,” Motzko said. “I think the first six games we’ve been waiting for a group of guys. We had much more energy at times throughout all of our lines were tonight.”

The Irish bounced back in the second period with a trio of goals, two of them by Leivermann. His power-play goal at 5:20 got the Irish on the board and Notre Dame tied it at 13:46 on a goal by Mequon Wisconsin’s Spencer Stastney.

“(Coach Jeff Jackson) has kind of been preaching to our power play that we haven’t got enough pucks to the net,” Leivermann said. “So I mean, we just kind of moved it around, make five or six passes, and hopefully, one of them goes in.”

Motzko lamented missed opportunities on special teams on a night when Minnesota’s power play was 0-for-3 against the Irish.

“We lost the special teams battle in a big game when you need it,” Motzko said. “Our power play had a couple opportunities get us back in the game and it doesn’t.”

But the Gophers regained the lead just 42 seconds later on a pretty goal by Garrett Wait. The former Edina star carried the puck into the left circle and across the low slot — with a toe-drag to evade a sliding Irish defenseman — before patiently outwaiting Morris who went down as Wait lifted a backhand shot over him.

The lead lasted less than four minutes, however, as Leivermann cut across the slot and fired a shot from between the tops of the circles that beat Moe for his second goal of the game and just the third of his college career.

“Both are goals that I had were plays made by other players so it’s nothing to be looked down upon me,” Leivermann said “But I think it’s really fun to play here and I know that the boys kind of get going, especially all of the Minnesotans. We’re excited to be here so it’s fun.”

Jackson said Leivermann, after struggling a bit on Friday night, bounced back solidly on Saturday.

“He’s learning how to defend because he’s always had the offensive skill,” Jackson said. “We’re trying to be patient with him, trying to get him some playing time so we can build some confidence, and tonight I thought it was really good.”

Tied 3-3 to start the third, the Gophers could not mount any offense and were outshot 17-2 in the final period. Defenseman Charlie Raith’s goal, the sophomore’s first collegiate point, just 1:25 into the period held up as the game winner with Maple Grove’s Trevor Janicke finding an empty net with 11 seconds remaining.

“The bad thing about tonight’s game in general is we got destroyed on the faceoff,” Motzko said of Notre Dame’s 41-18 faceoff advantage. “So you start the entire night on defense and that wears you down and give Notre Dame credit on that.”