Minnesota falls to Edmonton in a memorable game
for all the wrong reasons. 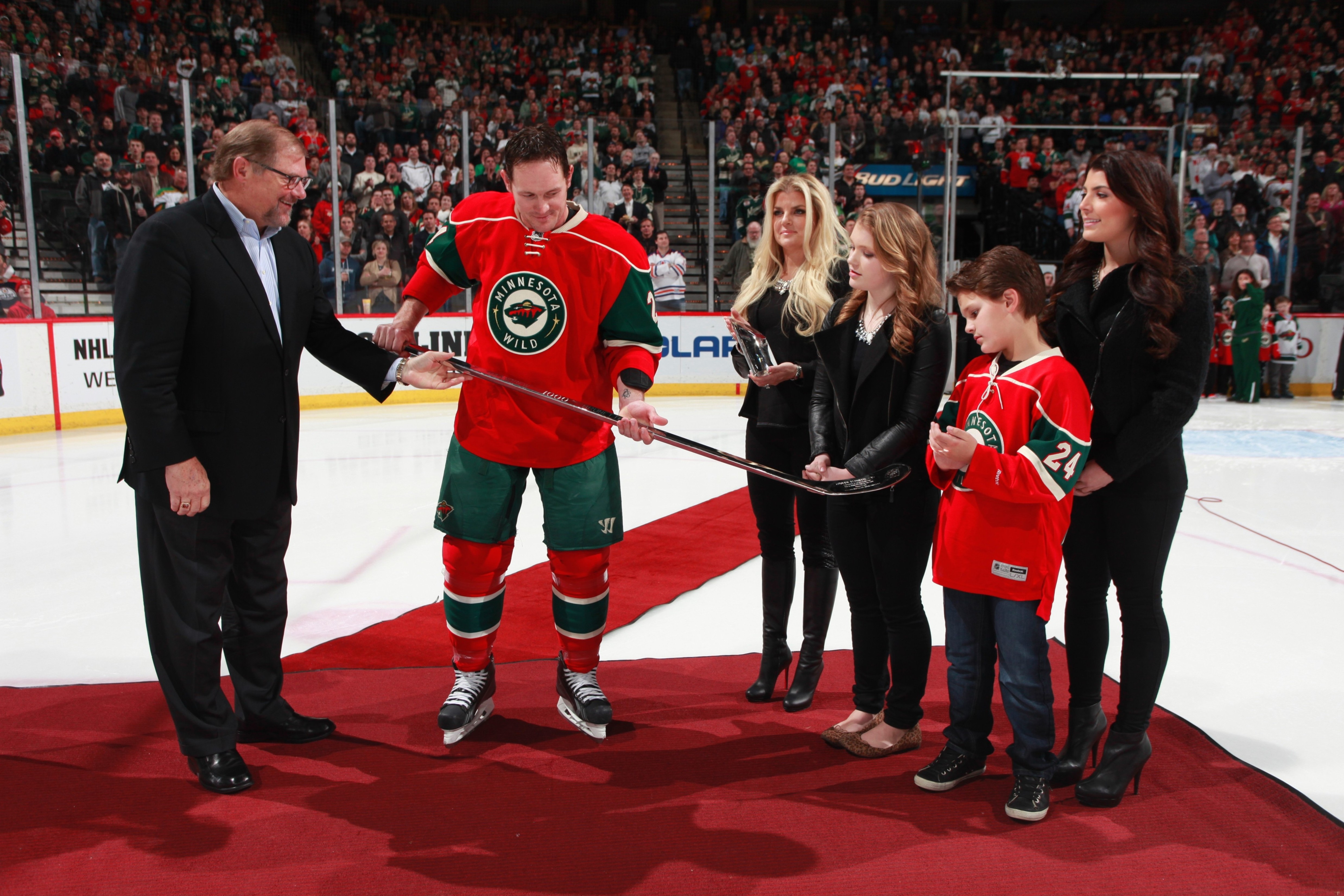 With his family at his side, Matt Cooke #24 of the Minnesota Wild receives tthe customary silver stick, emblematic of his 1000th career NHL game, from Wild owner Craig Leipold prior to Minnesota’s game against the Edmonton Oilers on March 11, 2014 at the Xcel Energy Center in St. Paul, Minnesota. (Photo by Bruce Kluckhohn/NHLI via Getty Images)

SAINT PAUL—In what should have been a game to remember with plenty for players to celebrate, the Minnesota Wild won’t soon forget Tuesday night for all the wrong reasons.

Minnesota blew a three goal lead at Xcel Energy Center to last-place Edmonton before ultimately falling in a shootout 4-3.  Mixed with the way things went down, the second consecutive shootout loss and first loss to the Oilers in three games this season stings in spite of the extra point.

Even in the grind of an 82 game season, a loss like Tuesday’s sticks out. It’s not just the point lost during the season’s closing stretch that is on the mind of Minnesota.

“You get the lead and you’re playing a team that’s kind of loosy-goosey and [Edmonton isn’t] as desperate as we were. It almost felt like we fell asleep with the way we were playing. It’s not good enough for the situation we’re in right now, fighting for playoff positioning,” Wild forward Jason Pominville said about his team, which is three points ahead of Dallas for the first wildcard berth. “We’ve got to be desperate and it wasn’t good enough tonight.

“Good start, but not good enough in the second half.” 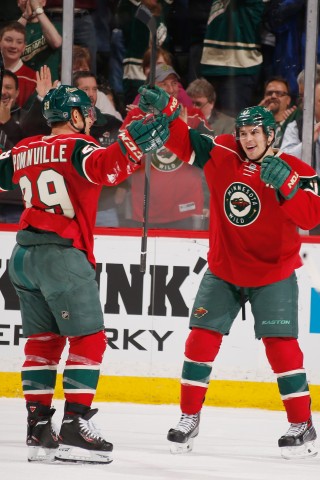 Jason Pominville #29 and Zach Parise #11 of the Minnesota Wild celebrate after scoring a goal against the Edmonton Oilers during the game on March 11, 2014 at the Xcel Energy Center in St. Paul, Minnesota. (Photo by Bruce Kluckhohn/NHLI via Getty Images)

Zach Parise, meanwhile, playing in his 600th career game, got Minnesota on the board 11:07 into the team’s 500th franchise sellout with his 22nd goal of the season.

Parise’s goal came on the power play when he tapped his own rebound past Viktor Fasth. Jared Spurgeon doubled the lead minutes later when his shot deflected off of Oilers defenseman Justin Schultz and Jason Pominville put the Wild ahead 3-0 with a second effort even strength.

Still, despite scoring three goals in a 4:16 span against the last-place Oilers, Minnesota head coach Mike Yeo wasn’t entirely happy with his team’s play during the first period, saying, “I thought that we were, to be honest with you, a little lucky to be up 3-0.”

“You can tell we weren’t on it right away,” added Yeo, whose team was out-shot 5-0 in the first 5 minutes. “I thought that we took advantage of a power play early and then got a couple quick ones, but you could tell we weren’t on top of our game.”

It didn’t change as the Wild’s quick blast on Fasth, who made 28 saves, was evened out throughout the rest of Tuesday’s game.

What should have been a spark of momentum following a comeback shootout loss to league-leading St. Louis, what should have felt like another Edmonton game, was treated like one. The outcome was taken for granted. Words like “complacency,” “no urgency” and “lack of energy” were thrown around. So were second guesses.

“Going into the third period, you’ve got to take it to them. You can’t sit back,” Minnesota defenseman Ryan Suter said. “I thought we sat back and they were throwing pucks through the net.”

Oilers defenseman Jeff Petry made it 3-1 with 3:55 remaining in the first when his pass to Ryan Nugent-Hopkins kicked off Jonas Brodin and into the net. Following no scoring in the second, an out-shot Edmonton team scored twice in the third by out-working the Wild defense.

First, Andrew Ferrence found a streaking David Perron in front of Darcy Kuemper with 8:54 remaining. Then Edmonton’s Jordan Eberle became the beneficiary of being in the right place for the right bounce and was left all alone to tie the game at 3 with 4:53 remaining in regulation.

“He quickly turned around and I recovered, but it kicked out to obviously the wrong guy to give it to there,” said Kuemper, who made 23 saves Tuesday.

Mixed among the goals was Minnesota, having 1:24 with a 5×3 advantage, only mustering one shot on net. A 1:51 4×3 power play to begin overtime netted none, frustrating the 18,650 fans in attendance.

Taylor Hall completed the comeback with a shootout winner in the fourth round. By the end of Tuesday night’s stretch of three games in four nights, Cooke’s ceremony and Parise’s milestones, along with the two points each member of the top line (Parise, Pominville and Mikael Granlund) had were an afterthought. They weren’t brought up at all; not even as a silver lining. There was no celebration and no one in Iron Range Red was smiling.

The moral victory of Sunday’s shootout loss was replaced with searching for a moral this time around.

While Yeo stated he didn’t want to overreact or pay much attention to what other teams do as momentum slips away. At the end of the day the Wild, which, spiral aside, does have points in 13 of its last 16 games, are going to remember the effort against Edmonton in the two games remaining in this homestand.

As a team that made several moves at the deadline and bringing in Matt Moulson to stave off complacency, Tuesday was a reminder to do the same on the ice.

“I felt like this was a game that was there for us,” Yeo said. “We have to find a way to win those games.”