One-man show does in Huskies 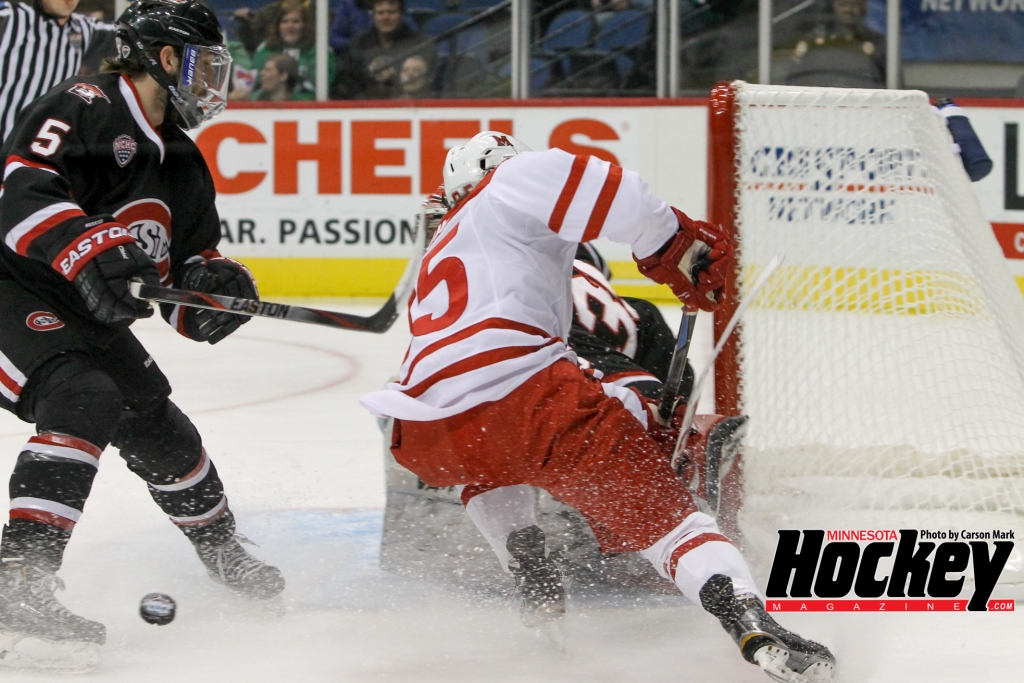 But the Huskies just missed their chance to do something they hadn’t accomplished in 14 years, and that was to win a postseason conference title.

Miami, led by Blake Coleman’s hat trick, handed SCSU its first loss of the postseason by a score of 3-2 in the NCHC Frozen Faceoff championship game.

“I loved how we competed tonight,” SCSU coach Bob Motzko said. “We left it all out there. We had some great looks at the end to get the thing tied up. I like a lot of things about our hockey team tonight.”

The loss drops SCSU (19-18-1) from ninth to 12th in the PairWise Rankings, but Friday’s win over North Dakota had already ensured the Huskies a requisite record above .500 and enough cushion in the PairWise to qualify for an NCAA regional.

Where and when they play will be announced at 11 a.m. Sunday.

Still, SCSU’s focus was winning a title Saturday, but instead it lost its third conference title game since it beat North Dakota in the 2001 Final Five championship.

“The good news is that our season isn’t over,” Huskies forward Brooks Bertsch said. “I think we can take something out of this loss and into next week and the NCAA Tournament.”

The Huskies got on the board first Saturday, thanks to a goal by Joey Benik 12 minutes into the game, but every time SCSU scored, Coleman had an answer.

He answered Benik’s goal when he deflected a cross-ice pass from Riley Barber out of mid-air and into an open net 4:15 later.

Coleman scored the game-winner 1:43 after his tying goal. Twenty nine minutes and 20 seconds was all Coleman needed to record the hat trick, and 34:12 was the time of the game in which he was forced to leave.

Coleman leveled SCSU’s Joey Rehkamp and made contact with his head, resulting in a five-minute major penalty and a game misconduct. It was Coleman’s third game misconduct of the season, which means he’ll miss Miami’s first NCAA tournament game.

But the senior center still left the biggest footprint in the game Saturday with three goals, a 14-2 faceoff record and half the minutes played.

“That’s a senior, and it was a blow to Miami when he got knocked out of the game because he was having an unbelievable night,” Motzko said.

SCSU had chances to score late in the game with a flurry of Grade-A opportunities in the final minute as the teams scrambled in front of the Redhawks net.

Rehkamp had the best chance to score with less than 60 seconds left with the puck at the top of the crease. He had Miami goalie Jay Williams beat, but as he brought the puck from forehand to backhand, a Miami defender used his stick to break up the chance.

Each goalie, SCSU’s Charlie Lindgren and Williams, finished with 18 saves. Lindgren was forced to make a big pad save on Miami’s Austin Czarnik on a shorthanded breakaway in the second period.