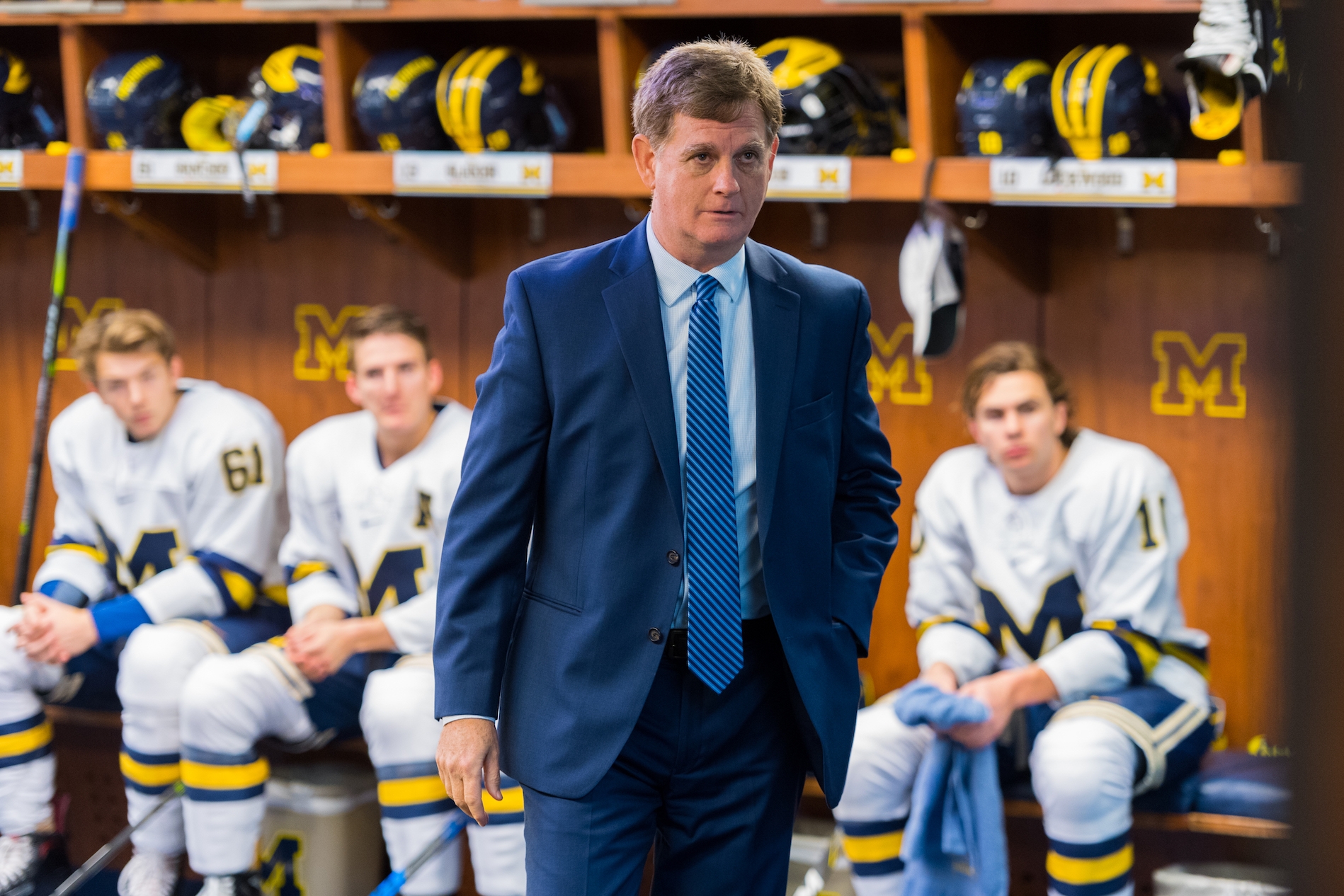 The St. Paul Rangers were one of five founding members of the Central Professional Hockey League (CPHL) back in 1963 and played three seasons at the St. Paul Auditorium as a minor league affiliate of the NHL’s New York Rangers.

Among those who laced up for the Rangers were Hall-of-Fame defenseman Doug Harvey, future St. Louis Blues great Bob Plager and Bob Woytowich, who skated with the Minnesota North Stars in the team’s inaugural season.

None of them contributed to the Rangers’ most successful season of 1964-65 when coach Fred Shero, who a decade later would lead Philadelphia’s “Broad Street Bullies” to back-to-back Stanley Cups, guided St. Paul to the CPHL’s Adams Cup championship.

One of those who hoisted the cup that night was a 5-foot-10, 180-pound forward from Flin Flon, Manitoba whose 46 assists and 70 points were career highs for the journeyman in the midst of a 16-year pro career with 12 different teams that ended in 1973 with the Minnesota Fighting Saints. 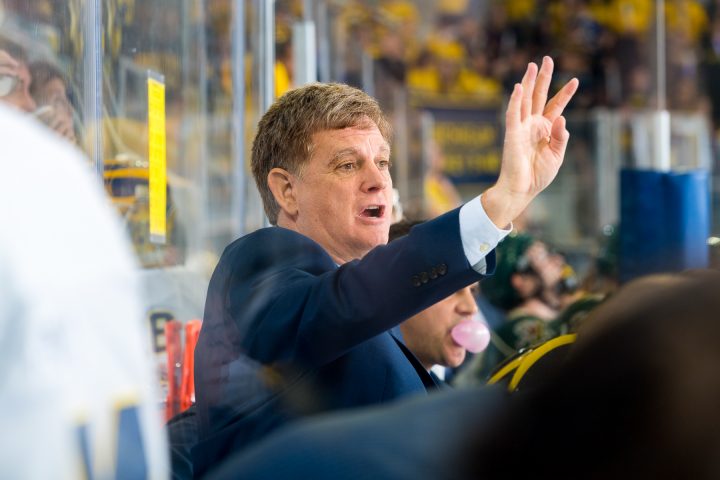 His name is Mel Pearson but most people are more familiar with his son, also named Mel, the head coach of the University of Michigan Wolverines, one of this weekend’s participants in the Frozen Four in St. Paul. The site is an all too familiar one to Pearson.

“It’s interesting we’re sort of heading right back to where it all started for me down at the same location as the old St. Paul Auditorium and then my dad played in the original Civic Center there,” Pearson said.

The Wolverines are back in St. Paul for the the first time since 2011, the last time the Frozen Four was played at Xcel Energy Center. Pearson was an assistant under Red Berenson seven years ago when Michigan reached the title game before falling to Minnesota Duluth 3-2 in overtime.

He was lured away from Michigan by a head coaching offer from his alma mater, Michigan Tech, the school he helped lead to its last Frozen Four appearance as a senior in 1981 in Duluth.  After compiling a 118-92-2 record in six seasons in Houghton, Pearson landed his dream job nearly a year ago when he replaced the retiring Berenson at Michigan.

Pearson was just five-years-old when his father played his lone season with the Rangers but, after a few more stops in a vagabond hockey career, the Pearson family returned to Minnesota in 1972 when Mel Sr. latched on with the Fighting Saints.

The Pearsons, which also included Mel’s mother, Ruby, and brother, Ted, settled in Edina where both boys played hockey in the city’s youth program. That’s when Pearson, a bantam at the time met teammate John Anderson, the man who now refers to Pearson as, “a brother from another mother.”

Anderson and Pearson went on to become teammates at Edina-East High School under legendary coach Willard Ikola, who led Edina teams to eight state championships and 616 wins in 33 seasons.

Pearson’s father scored eight goals and 20 points for the Fighting Saints in 1972-73 but when he was not brought back the following season he opted to hang up his skates. That’s when the family made the calculated, but difficult decision to move back home to Flin Flon one man short.

“Mel’s mom and dad wanted him to have an opportunity to potentially earn a scholarship with his hockey and, more importantly, get a good education; that was their primary concern,” Anderson said. “And he was living in Edina and Edina wasn’t all bad.”

The Pearsons left Mel behind, setting him up with a billet family kitty-corner across the street from the Anderson household. However, it quickly became obvious that the family, with its much younger children, and Pearson were not a good fit.

“I asked my parents if it would be alright to take Mel in,” Anderson said. “They thought about it for about 10 seconds and said, ‘Sure.’”

Pearson was more than eager to please his new host family and immediately took one for the team. 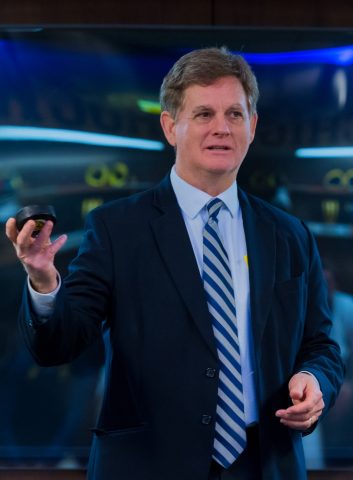 “The first night he came to our house my mom made split-pea soup and he absolutely hates split-pea soup,” Anderson said. “He sat there and ate it with a smile on his face. ‘Oh Mrs. Anderson, I just love this soup.’”

“In the middle of the night he’d throw a shoe at me, or something like that,” Anderson said. “I’d have to short-sheet his bed or get back at him in some fashion and let him know that wasn’t acceptable.”

Anderson said Pearson spent eight years living with his family, three in high school, four more while he went to Michigan Tech and another year while working as a sales rep for a Twin Cities sporting goods company after graduation.

The feeling is mutual, according to Pearson.

“We’re so close that he actually officiated my daughter’s wedding a couple years ago,” Pearson said. “That’s how tight we are.”

Pearson’s current family’s origins can be traced to Edina as well where he met Susie, who would eventually become his wife. Like Mel, Susie was the new kid on the block, so to speak, having moved to Edina from Atlanta due to her father’s job at 3M.

The couple started dating in high school and maintained a long-distance relationship as Susie went to the University of Minnesota while Pearson was at Tech. They are approaching their 36th anniversary and boast three children, Kim, Sarah and Paul, and one grandchild, Sarah’s son Finnely.

“She’s the one that grounds me,” Pearson said of Susie. “When I get off on these tangents or something or get to wound up about the hockey, she’s the one who reels me back in. You need that, you need to strike some balance in your life. Other than being my biggest supporter, she’s also the one who keeps me in line.”

After Mel graduated from Edina, his parents sent his brother Ted to live with another Edina family and pursue the same dream. He won back-to-back Minnesota state titles with Ikola and Edina-East in 1978 and 1979 before going on to play at Wisconsin where he won national championships in 1981 and 1983 under Bob Johnson and Jeff Sauer, respectively.

“Neither one of my parents went to college and I think they saw the opportunity that presented itself and I was fortunate to have developed as a player in Minnesota and went on to play at Michigan Tech. The foresight was invaluable then.”

To this day, Anderson is amazed by the sacrifices the entire Pearson family made in pursuit of Mel and Ted’s academic and athletic goals.

“It’s a huge credit to them, it was a huge blessing to our family and I think we’re all a little bit better because of it.” 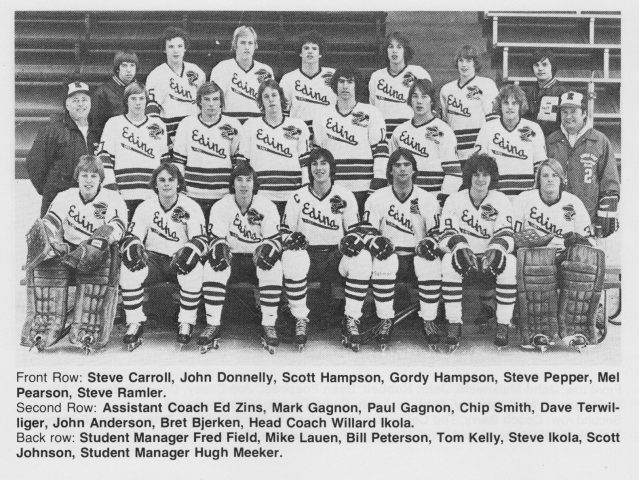 The friends, teammates and roommates played in a state tournament together as seniors in 1977 under Ikola, finishing runner-up to Rochester-John Marshall.

Pearson recalls admiring Ikola for the way he ran his teams with discipline and accountability, even when he was the one held accountable.

“I remember one day, just as we got on the ice and were getting warmed up, I shot a puck up into the stands on purpose and Willard told me to go get the puck,” Pearson said. “I looked at him and I said, ‘I’ve got my skates on.’ He said, ‘You get up there and you go get that puck.’ I had to get off the ice in my skates and crawl around get the puck. My teammates got a good chuckle out of that and, needless to say, I never flipped another puck in the stands on purpose.”

Ikola, an All-American goaltender at Michigan (1952-54), was just the first former Wolverine to mentor him.

“I was very fortunate to end up being able to play for a guy like Willard Ikola,” Pearson said. “Really, all thoughout my career I’ve ended up in spots where I’m coached by a former Michigan player and it all started with Ike.”

His good fortune continued in college with the opportunity to play for another former Michigan goalie, John MacInnes (1946-50), who led Michigan Tech to a 555-295-39 record and three national titles in 26 seasons coaching the Huskies.

“You look at them, I mean Willard’s arguably the best coach in Minnesota high school hockey history,” Pearson said. “John McInnes, when I was playing for him, set the record for most all-time wins in college hockey and won national championships at Michigan Tech. And then Red is one of the, I think, top five all-time in college hockey and he got a late start in college and won national championships. So they’re all not only great men and teachers of life but winners.

Pearson says the trio shares many qualities but one in particular stands out as the one he most tries to emulate.

His childhood friend sees the same qualities in Pearson

“Mel will be a total asset to that Michigan hockey program for as long as he’s there because he’s got the kids’ interests at heart and he always will,” Anderson said. “He’ll never put himself first before the team and that’s why he’ll be successful wherever he goes.”