One in a Row 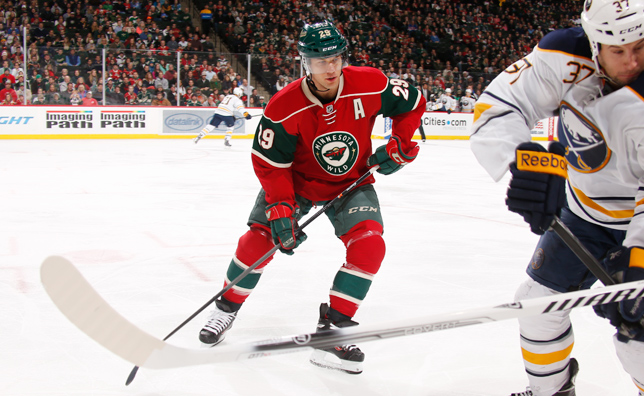 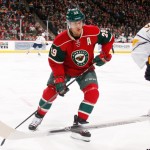 The dark cloud casting an ever-increasing shadow of doom over the Minnesota Wild dressing room recently gave way to a sliver of daylight on Thursday night at Xcel Energy Center. On the strength of three second-period goals, the Wild managed to defeat the lowly Buffalo Sabres 4-1 in front of 18,229 to snap a franchise high six-game losing streak.

Goals by Marco Scandella, Jason Pominville and Jason Zucker in the middle stanza gave Minnesota its second such lead at home in five days. Unlike Sunday’s debacle against the Islanders, however, the Wild managed to maintain its lead to record their first win since a beating Vancouver in a shootout on Dec. 17 in St. Paul.

Wild center Kyle Brodziak, capped off the scoring with an empty net goal without even taking a shot. Brodziak’s 30-game goal drought ended when Buffalo’s Christian Erhoff hauled him down as he carried the puck toward an empty net. The officials awarded Brodziak his third goal of the season, ruling he would have scored.

“He was going to score. He was going to go top shelf, for sure,” Yeo said, unable to keep a straight face and eliciting laughter from the media. “But he earned that goal with his play; he was good all night.”

Pominville tallied his team-leading 18th of the season and second in two games against his former team, each of them holding up as game winners. He admitted shooting on Sabres and newly-named U.S. Olympic goalie Ryan Miller is still difficult to get used to.

“He’s in a pretty unique class of goalies,” Pominville said. “I think we played 11 years together so he knows everything I’ve got so I just shut my eyes and threw it on net and found a way [to score].”

Wild goaltender Niklas Backstrom, however, outdueled Miller, making 19 saves to snap a personal eight-game losing streak. The win, just his second in regulation this season and first since Oct. 26, and raised his record to 3-9-2.

Backstrom, who wasn’t supposed to play against Buffalo but was forced into action when the team learned earlier in the day Josh Harding was unavailable due to illness, diminished any suggestions the game offered any sort of personal redemption.

“You try to approach the same way every day, it doesn’t matter if you play good or you play bad,” Backstrom said. “You go out there and work as hard as you can and when you do that, good things are going to happen. You can’t focus on what happened in the past. You just approach the same way every day and believe in what you’re doing. It’s been working, so it’s going to be there sooner or later.”

But his effort was not lost on his teammates.

“We’re really excited for Backy,” Pominville said. “He played really well and I think we all know he was going through a bit of a tough-go. We weren’t scoring a lot of goals when he was playing, so just to get the lead for him tonight was huge and for him to stand tall when he needed to was huge for the team.”

Captains Ryan Suter and Mikko Koivu each had two assists and were a combined plus-4 to contribute to what Yeo termed as a complete game.

“We had everybody show up and play hard and play the right way tonight, and I thought that started with our leaders, there’s no question,” Yeo said. “I’ve said this many times: That’s what we need those guys to do.”

Terms like “details” and “the little things” were used repeatedly in the Wild dressing room and attention to those were critical to a Minnesota team 5-12-1 in its past 18 games looking to get out of its funk.

“We did all the small things, all the details right,” Backstrom said. “Shift after shift, we did the right things. That’s something you have to build on.”

“If you look at it, we didn’t do anything special but we did a lot of good things right and all the little details right,” Pominville said. “That led to us out-shooting them and for the most part out-playing them.

“We needed points bad and we need to keep headed in that direction.”