St. Cloud Cathedral is headed to the Class A title game. 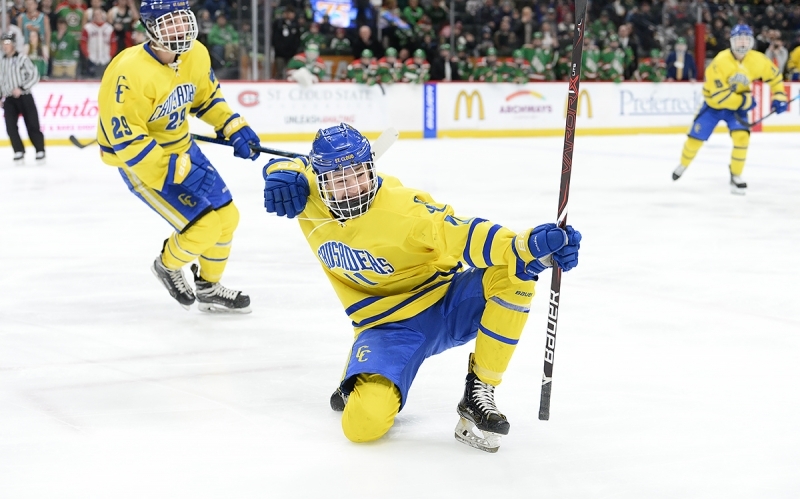 The No. 2 St. Cloud Cathedral Crusaders are headed to the Class A title game for the first time in school history, after their 6-2 win over the No. 3 East Grand Forks Green Wave on Friday.

They capitalized when it mattered and the St. Cloud Cathedral Crusaders are a win away from a state championship.

“We have so many high-end kids,” said head coach Derrick Brown following the win. “And today, we were opportunistic. We found ways to get the puck to the back of the net. At the end of the day, the scoreboard reads 6-2, but they really did give everything they had. I’ll give them a ton of credit. They brought up the intensity and the pressure. “

East Grand Forks turned it on in the second, with 16 shots on net which also included a 48 second 5-on-3 advantage but couldn’t convert either power play.

They did end up scoring towards the end of the frame on even-strength but they still trailed 4-2 heading into the second intermission.

“For us, that 5-on-3 power play that they had, I think that was kind of the momentum turner of the game,” said Brown. “We got through that and then after that, we felt pretty good about our chances the rest of the game.”

On the other end of the ice, East Grand Forks disagreed that failing to capitalize on the 5-on-3 was the turning point. Instead, the team was never able to make it a one-score game.

“I’m not going to say it was the turning point,” said head coach Tyler Palmiscno. “It could’ve made it a different game but we were never able to get it back to one goal.”

St. Cloud added two more goals including an empty-netter in the final period to seal the win.

Meme of the year

There was a funny moment before puck drop as Crusaders defenseman Jon Bell took a spill during introductions. He eventually assisted on his team’s second goal but he’s aware his tumble is going viral.

“All I can say about that, is it’s the high school meme of the year,” said Bell after game.

With their win, St. Cloud Cathedral will play the winner of Mahtomedi vs. Greenway in the Class A title game on Saturday.