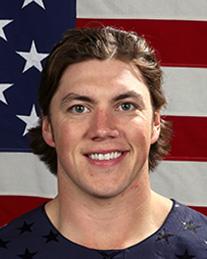 In a feat never seen before in USA Hockey Olympic history, Warroad Minnesota native T.J. Oshie scored four shootout goals in leading team USA over the Russia 3-2 in overtime.  The epic game lived up to the hype and then some, with both teams playing as if   it was a game seven of the playoffs (or for the Gold medal) instead of a preliminary game leading to the medal round.

With a sellout crowd at the Bolshoy Ice Dome, in a game that had as much hype and build up that would rival the gold medal game featuring Canada and Team USA in Vancouver, the players did not disappoint as the game became a classic.  The game will go down eternally in USA Olympic hockey history.  The feat was noticed from the highest office in the world, with a tweet from President Obama and the White House congratulating Oshie and the team.  It was most celebrated in Warroad Minnesota, the small town just miles from the Canadian border that is the official Hockey Town USA.  No USA team has ever won a medal at the Olympics without having a Warroad native on the roster.

The pace was lightning fast for a full 65 minutes. The hits were punishing and delivered with purpose.  Throw in the bravery exhibited by players like Minnesota native and former Cretin Derham Hall and present New York Ranger star  Ryan McDonough  taking one for the team using whatever body part was available to block shots, including taking one off his unprotected back by diving in front of a one timer by NHL star Alex Ovetchkin, shows the type of determination that leads to victory.

The loud, pro Russian crowd that included Russian President Vladimir Putin watched the teams skate to a 2-2 at the end of regulation, a score that held up only because an apparent Russian goal with 4:40 left in the third period was disallowed after video review. The long blast from Fyodor Tyutin from just inside the blue line hit the back of the net, was tipped by the left face off dot at about chest level by a team mate past U.S. goalie Jonathan Quick, but was waved off after a video review showed the net was off its moorings.

The five minute 4 on 4 shoot out yielded several scoring chances, including a clean break away by Patrick Kane, who found himself all alone after getting behind the Russian defense.  With two defenders chasing him, Kane tried to go five hole, and his shot was stopped by Russian goalie Sergei Bobrovski.

With the game tied, it was now headed to the shootout, the first time Team USA has ever been involved in one while at the Olympics.

For such a time as this, Oshie was picked for the team. Oshie was one of the last players chosen by Team USA Executives, and in the selection article written by ESPN’s Scott Burnside, this very moment was a key factor for he being on the team.

T.J. Oshie’s magic in shootouts was a frequent topic of conversation when general manager David Poile and his selection committee chose the U.S. Olympic team roster.

“You know at some point we are going to end up in a shootout, and we are going to want T.J. Oshie,” Poile said more than once. Coaches had the same mindset about Oshie’s specialty. The Americans appreciated what he brought to the team in general, but they loved his shootout prowess. He was like the team’s ace in the hole.

The deal maker for Oshie in earning a spot on Team USA was his ability to score in the shoot out.  When called upon this season by the St. Louis Blues, Oshie has an amazing 70% scoring ratio in beating the goalie in a high stakes game called the shoot out.  With the pressure that goes into every game in the NHL, when it comes down to a shootout and the winning team getting the extra point, all of these extra points for winning in a shootout can decide the fate of a team making the playoffs or not. Oshie has made 25 of 46 shootout attempts in his NHL career. This season, interrupted by the Olympic tournament, he has made 7 of 10 attempts, plus the one penalty shot he has tried. No one in the league has made more.

The rules for overtime and shootouts in Olympic hockey differ from those for the NHL.

Preliminary round: Five-minute, 4-on-4 overtime.

Gold medal game: 20-minute, 4-on-4 overtime. Teams also get a 20-minute break before the OT period and will change ends.

Shootouts: This is where it gets interesting. Each coach designates three players for the shootout, and they each must take one shot. According to international rules for Game Winning Shots (aka shootouts), “If the game is still tied after three shots by each team, the GWS will continue with a tie-break shoot out by one player of each team, with a reversed shooting order. The same or new players can take the tie-breaking shots.

Round 1: Oshie scores for US, Malkin misses for Russia

Round 3: Joe Pavelski stopped for USA, Kovalchuk scores for Russia

The first question Dan Bylsma faced afterwards in the press conference was why he had stuck with Oshie.   “T. J. has been exceptional on the shootout, and in his career he’s been outstanding,” Bylsma said. “By far the best number on our team, this year in particular. Once we got to the fourth shooter, and the quality moves he had, even when he missed, we were going to ride him out.”