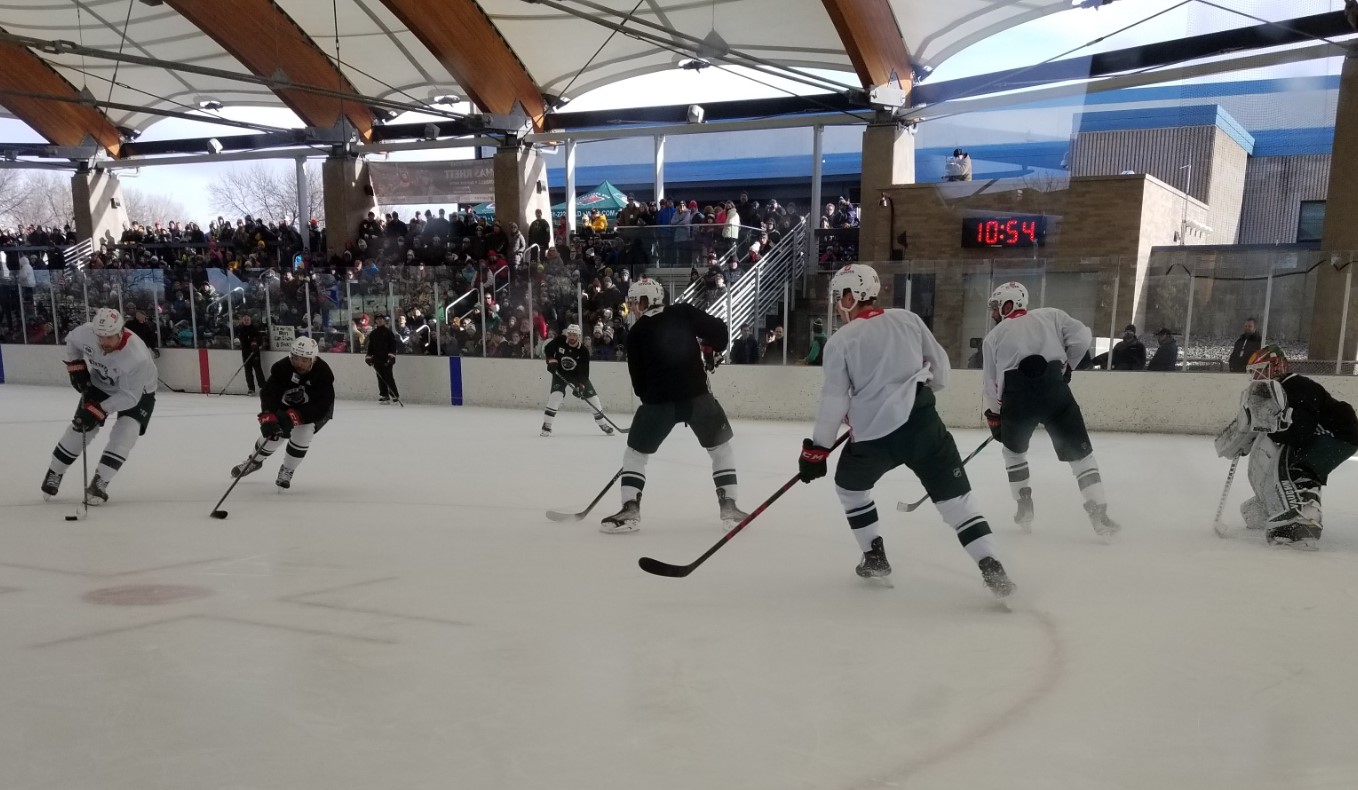 SAINT LOUIS PARK — The sun was shining. The temperature was in the mid-30s, continuing the theme of a beautiful autumn in Minnesota. Hockey fans packed the bleachers at the outdoor sheet of ice in St. Louis Park on Thanksgiving weekend. The draw? The Minnesota Wild’s first outdoor practice in nearly two years. 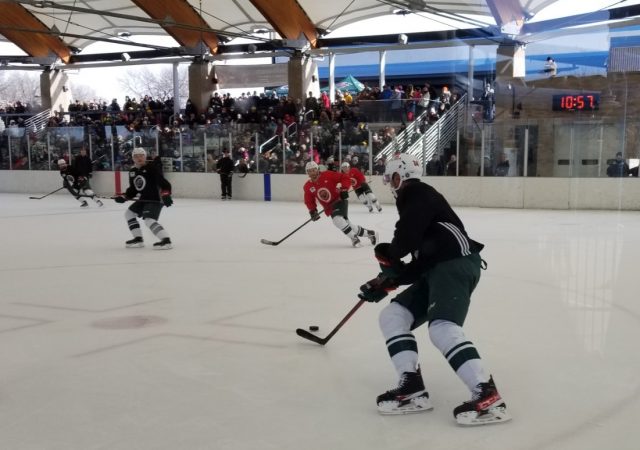 “We want to have fun, but we’re still working,” said Wild head coach Dean Evason. “We haven’t had a lot of practice time. It was work today, but it was also clearly fun to be outside and to have the fans. As we’ve talked about, our fans have been absolutely incredible all year.”

Those incredible Wild fans who showed up for the outdoor practice two seasons ago have seen this Wild roster go through some major changes.

It’s amazing how much has happened since the Wild last hosted an outdoor, open-to-the-public practice on Jan. 2, 2020. The most obvious item, of course, is the global pandemic that changed everything before that season was over.

But looking at the Wild team specifically, so much is different. In January 2020, Bruce Boudreau was still the Wild’s head coach. Though he was fired on Valentine’s Day that year. There was also a ton of buzz at the ROC (Recreation Outdoor Center) at the time with the official announcement of the NHL Winter Classic coming to Target Field. That game was originally scheduled for Jan. 1, 2021 before the pandemic canceled those plans.

Following the announcement and practice in early 2020, the media talked with Boudreau and a few players to get their thoughts on the exciting news of playing outdoors. Zach Parise said the Winter Classic coming to Minnesota was “a little overdue.” Ryan Suter reflected on the Wild’s Stadium Series game in 2016 against the Chicago Blackhawks. Eric Staal, 35 years old at the time, looked forward to the Winter Classic having never played in an outdoor NHL game. 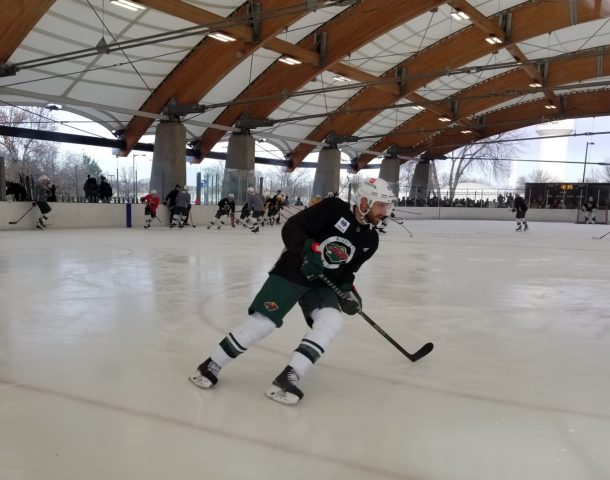 The loss for guys like Staal, Suter and Minnesota-native Parise looking to play that Winter Classic is the gain of Minnesota products Nick

Bjugstad and Alex Goligoski. Bjugstad grew up playing hockey for Blaine High School while defenseman Goligoski represents the North out of Grand Rapids.

“It’s kind of crazy that we get to play an outdoor game in Minnesota with my hometown team,” Bjugstad said. “I’m sure that’ll sink in probably a few days before. That excitement’s there.”

For now, Bjugstad and his teammates got a taste of outdoor hockey at the ROC. It was a typical Wild practice, until the end when players tossed souvenir pucks into the stands for eager fans. The players talked about how perfect the weather would be if they could copy/paste this for Jan. 1. Conditions were so perfect that bundling up in layers wasn’t necessary, according to alternate captain, Marcus Foligno.

“We know it will probably be a little bit colder than today,” Foligno said. “We were all thinking about it (the Winter Classic) out there for sure.

“Obviously being in a bigger stadium. It’s the same thing, you step on that outdoor pond and you feel all the good jitters when you were young again. It brought back a lot of good memories today.” 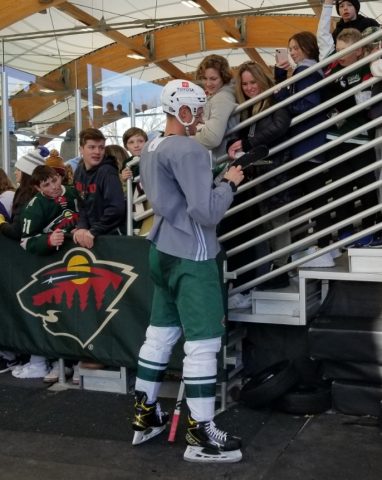 Some players even stopped to greet fans or sign autographs on their way off the ice. A few players, like Goligoski and Jon Merrill, went back onto the ice afterward with their kids skating around and shooting at the net. Kirill Kaprizov didn’t come off the ice because he was busy passing a puck back and forth with a youngster donning a Goligoski jersey.

With so many road games and a tiring travel schedule lately, the outdoor practice was a welcome break.

“When you step on the ice in front of the fans in this kind of scenario, you get that childhood feeling again,” Foligno said. “A lot of fun, a lot of smiles on guys’ faces today. We’re all looking forward to that Jan. 1 game.”

The rescheduled Winter Classic against the St. Louis Blues at Target Field will also mark the first time the event will be played in primetime. It’s the 14th anniversary of the first NHL Winter Classic in Buffalo.

While Evason, Bjugstad and Foligno all agreed that weather conditions were just about perfect for outdoor hockey during Saturday’s practice, Minnesotan Bjugstad acknowledged it might be a different deal in January.

“You feel it out,” Bjugstad said. “Like I said, we’ve all had the cold feet, the cold fingers. I’m sure the adrenaline will just kick in, and it’ll be a game to remember.” 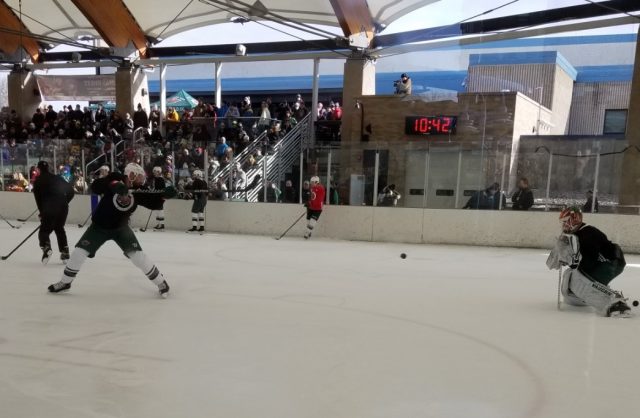 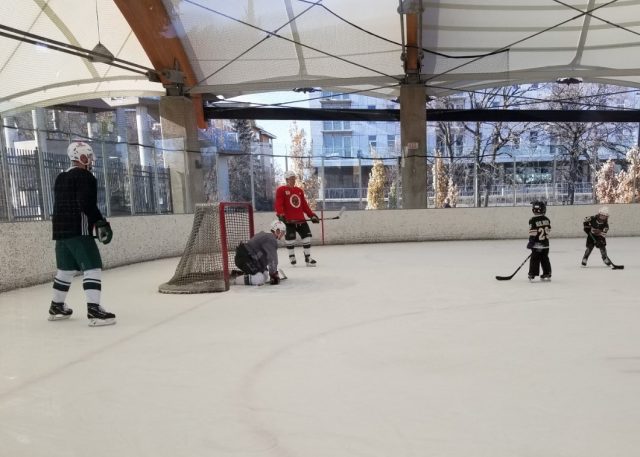 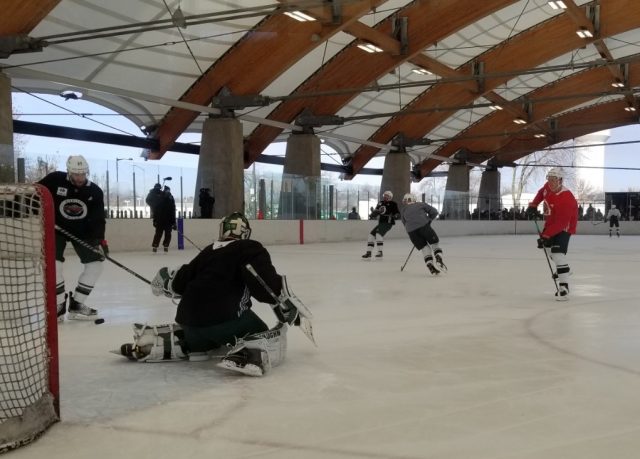