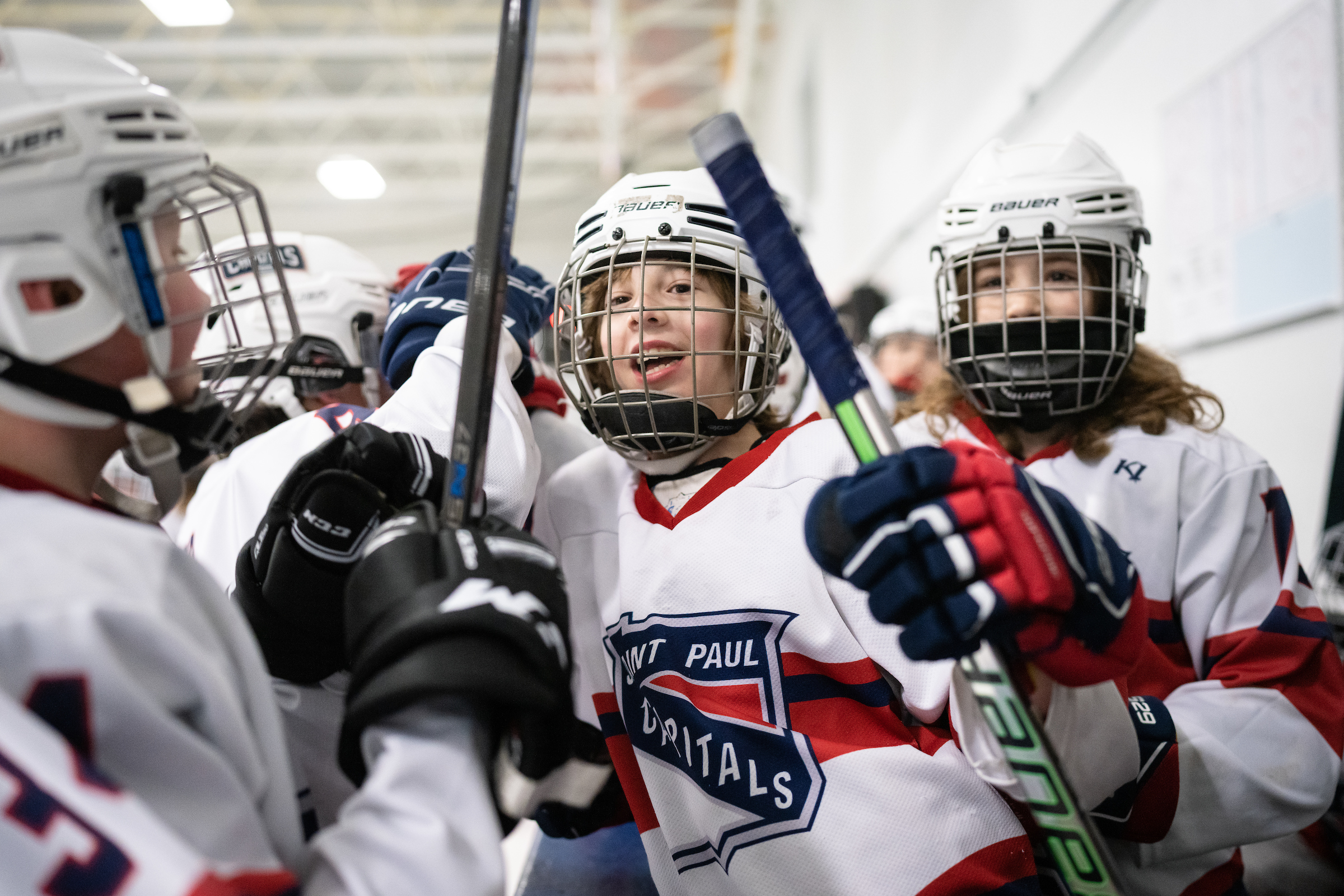 Owen Nei in his happy place: At the rink with his friends. (Photo by Ben Brewer courtesy of Gillette Children's Specialty Health Care)

ST. PAUL — The Charles M. Schulz-Highland Arena filled up long before the scheduled puck drop on a Friday night in February. The anticipation was palpable. Fans donned various hockey sweaters and found space to view the ice wherever they could. 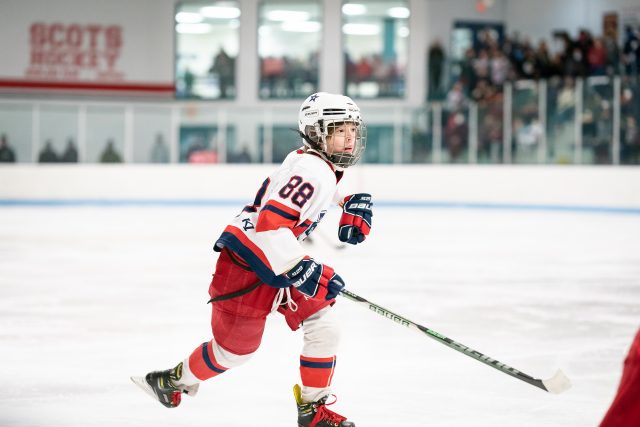 This might be setting the scene for a boys’ section final hockey game. But chants of “Owen! Owen! Owen!” rang out and dozens of red paper signs labeled with a nickname “O-Dawg” scattered the stands. It all supported 13-year-old St. Paul Capitals Hockey peewee C blue team player Owen Nei, who skated in his final organized, competitive hockey game.

“My son played for CDH (Cretin-Derham Hall), and he said: ‘I don’t think it was ever this full when I played for CDH,’” said Chris Nei, Owen’s father and head coach of the Capitals.

This was a special night for Owen and his family, marking the end of his playing career. Owen served as Gillette Children’s St. Paul spokesperson for the Minnesota Wild’s and Hiway Credit Union Hockey Kids4Kids program.

Owen had to get permission to play hockey at all, because of his health. With a thinner spinal column at the brain stem area, Owen is a higher risk for injury, where even a heavy whiplash could have an impact, according to Chris. Owen has undergone multiple surgeries addressing Goldenhar syndrome, a rare malformation of the cranial structure.

Because of those health risks at the next level, Owen is stepping away from organized hockey.

“You can’t stop living,” Chris said. “But when it comes to checking, that’s just a whole other thing where he just doesn’t quite have the coordination to protect himself.”

For player introductions before his final game, the arena went dark except for a spotlight. Players lined up at the goal line, and Owen heard the loudest cheers as he skated to the blue line announced as the starting center. The crowd roared when he took the opening faceoff, anticipation rose any time he got near the puck and it was always obvious when Owen hit the ice for another shift, based on the crowd noise. 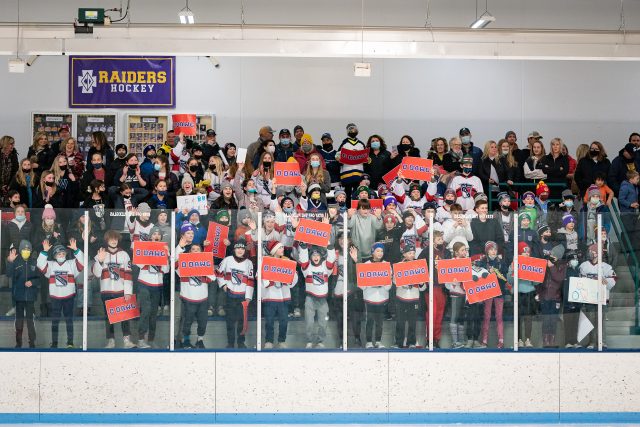 For Chris Nei, the entire night was overwhelming.

“It’s bittersweet,” Chris said. “I don’t know what to say. Half the time I was crying out on the ice, watching this whole thing unfold, seeing an arena packed full.”

To put a bit of icing on the cake, Owen scored a goal in the eventual 9-0 victory for his team. Camped out in front of the net during a power play, Owen tipped the puck into the net.

“Yeah, it was off my shoulder, and I just looked around,” Owen said. “It was crazy. The whole crowd went crazy.

“That was amazing. I loved it. The crowd loved it. Everyone loved it.”

Scoring goals is most definitely one thing Owen said he’ll miss about playing the game.

Once the final buzzer sounded, Owen was supported by his teammates and opponents at center ice. Owen’s family joined him on the ice as a proclamation was read from the city of St. Paul, declaring Feb. 11, 2022 as Owen Nei Day. Owen took the sheet with the proclamation and skated excitedly along the glass near the fan section, showing off the paper with excitement.

The day was marked with more than just the finality of one last game for Owen. Surprises started before the players hit the ice, when former Minnesota Wild forward Wes Walz showed up in the team’s locker room carrying a special memento to present to Owen: A Kirill Kaprizov-signed stick.

Along with the stick, the Wild also donated a suite for Owen and his teammates to enjoy the March 27 game against the Colorado Avalanche at Xcel Energy Center. 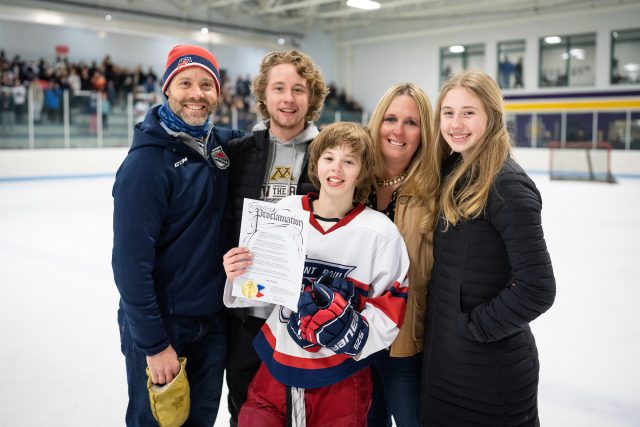 Walz hadn’t met Owen before, but he recognized his face right away from the Hiway Credit Union commercials Owen was in with former Wild goaltender Devan Dubnyk. That made Walz recall the conversations he’d had with Dubnyk about Owen, with Dubnyk saying Owen is “just the sweetest soul, just a joyful kid,” Walz said.

Owen’s an amazing kid who is an example of the human spirit and overcoming anything in life if you put your mind to it, Walz said. While Owen has gone through a lot in life, he keeps it simple and doesn’t let anything stand in his way, Walz added.

“I told Owen we got a lot in common because I retired from playing organized hockey, too,” Walz said. “So we all at some point in our life retire from organized hockey. And it doesn’t mean you never play hockey again.”

Everything about the last game from the fan support to the declaration from St. Paul was so sweet for Owen, his dad said.

“He’s always just wanted to be a DI hockey player, NHLer like every little kid that dreams about it,” Chris said. “Knowing it was going to end, we were at a Bismarck tournament. We actually won it. He was crying when we got home. He said, ‘I just don’t want this to end. I’m just having so much fun with my friends.’

With all the fanfare of the day, Owen said his last game wasn’t that hard.

“But after the game, I kind of teared up,” Owen said. 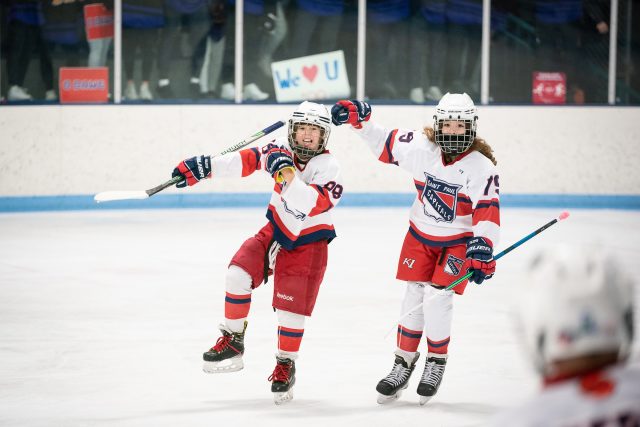 Owen Nei points to the shoulder off of which his final youth goal was scored for his Highland Park hockey team at Charles Schultz Arena in Saint Paul, Minnesota, Friday, Feb. 11, 2022. (Photo by Ben Brewer courtesy of Gillette Children’s Specialty Health Care)

After the game, Owen, his family, teammates and hockey community gathered for a reception at the arena, complete with cookies with “Owen” written on them in icing. Media members were there for interviews, and representatives of Hiway Credit Union and Gillette Children’s Specialty Healthcare in St. Paul were also on hand to mark the occasion.

The surprises weren’t done either. Owen received special video messages from Dubnyk and then current Wild forward Marcus Foligno. Owen’s grin spread wider and wider across his face while he watched and listened to Foligno congratulate Owen on his hockey career.

“It probably made my day,” Owen said. “Besides the Kirill Kaprizov stick.”

Though Owen’s journey on the ice playing organized hockey may have come to an end, he’ll still be around the game. He’ll cheer on the Minnesota Wild, of course, and he’s already got plans for next season. Cretin-Derham Hall boys’ varsity coach Matt Funk made the offer to Owen to be the team manager next season, if it’s OK with his parents.

So Owen will still be part of hockey and is “super excited” for that next opportunity.

Watch him play, see the smile on his face, how he lights up being at the rink and around the game. Owen is a kid who loves hockey, pure and simple.