Palmquist takes his game to next level 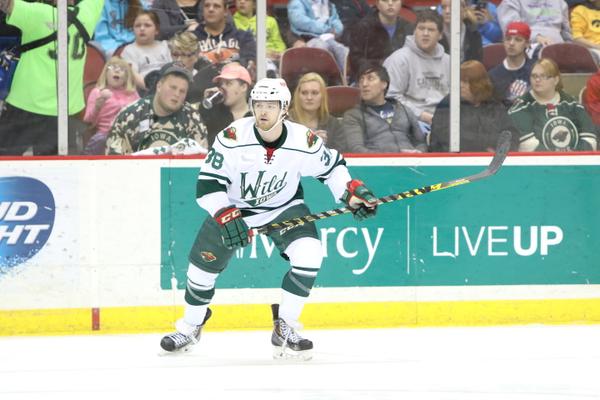 Zach Palmquist is getting a head start on his pro career by finishing this season with the Minnesota Wild’s AHL affiliate in Iowa. (Iowa Wild Photo / Ted Sandeen)

DES MOINES — Late in the season as college hockey players see their seasons and collegiate careers come to an end, many of them get an opportunity to show what they can do in the professional ranks. One of those players is Minnesota native Zach Palmquist, who made his American Hockey League debut on April 3 for the Iowa Wild.

The South St. Paul native didn’t waste any time making an impact on his new team, notching an assist in his first game, a 6-0 win over the Rochester Americans in Des Moines. The win was the first on home ice for the Wild since Jan. 18, snapping a 14-game home losing streak.

Iowa coach John Torchetti said Palmquist gets back and gets to the puck on defense quick, but will be able to make an impact on the offensive side of the puck as well.

“He’s what we need,” Torchetti said. “We need a good puck-moving defenseman. So far he’s played pretty good and he’s going to have to learn the little things in d-zone coverage that most players have to. He’s going to join the rush, activate our rush so we’re four up and bring a little more speed to our breakouts.”

Palmquist said that it was “nice” to be able to contribute on the scoreboard with an assist in his professional debut. He had the secondary assist on the last goal of the game, which was scored by Joel Choinard and also assisted by Michael Keranen.

“The team played well that night and before the game a lot of the guys just said ‘just play your game and have fun,'” Palmquist said. “So that’s what I try to do out there and any way I can try to contribute I’m going to try to do my best and give the guys my best effort every night.”

Palmquist joins the Wild organization after finishing up a four-year collegiate career at Minnesota State University in Mankato where he played 160 games and tallied 96 points (25 goals, 71 assists), including a career-high 29 points (8 goals, 21 assists) his senior season. He also had 107 penalty minutes in four seasons.

The Mavericks entered the NCAA Tournament this season as the No. 1 overall seed, but were upset by Rochester Institute of Technology 2-1 in the first round.

Palmquist tallied 18 points (4 goals, 14 assists) and a minus-18 rating in 59 games his third and final season  with the Waterloo Black Hawks of the United States Hockey League before heading to Mankato where the coaching Minnesota State staff turned him into more of a two-way player which prepared him a lot for his shot in the AHL.

“It elevated my game each year,” Palmquist said. “I think I was a one-dimensional player going into Minnesota State and I think I grew into more of a two-way player … played more of a defensive role going into my junior, senior year. Also being that offensive defenseman that I like to be too, but I think I improved and the coaches helped me a lot to become a better defensive player and be a plus player every night too, which is big in today’s game.”‘

Palmquist said he and his father, Dave, who coaches the girls’ varsity hockey team at South St. Paul, used to attend Minnesota Wild games when he was a kid and that he’s been a fan since the team started playing in St. Paul in 2000.

“It’s been fun watching them grow up and it’s just been such a dream come true to actually be in the organization now,” said Palmquist.

As far as what Torchetti wants him to accomplish in the last few games of this season, he said it’s about getting the system down fundamentally.

“I think that we play a different type of breakout system and it’s a little difficult,” Torchetti said. “We play more of a three-man system on the breakout and if you’re not used to it, it’s something you’ve got to get used to and he’s a good enough skater that it should be an easy transition for him, so that’s one good thing that I’ve noticed.”

Torchetti said that Palmquist getting some games in at the end of this season is like a “pre-training camp” and will help him become more detailed as he trains in the summer for next season.

The Wild have struggled all season long as their 23-46-2-2 (50 points) record indicates and even went 14 straight games without a win on home ice between Jan. 18 and April 3. But in their most recent four-game homestand, which wrapped up Friday, Iowa won two games in shutout fashion.

The Wild beat the Rochester Americans 6-0 April 3 before losing 6-4 to the Texas Stars April 7. They fell again April 9 5-3 to the Rockford Ice Hogs before defeating the Oklahoma City Barons 4-0 Friday.

The two shutouts were just the second and third of the season for the Wild and the first two for Iowa goaltender John Curry.

“I think the team’s just been playing better,” Curry said. “It’s been a little up and down and obviously the results haven’t been as consistent enough but I think that in many pictures of every game, we’re doing things better. It’s just a matter of putting it together for 60 minutes and I thought that was the difference tonight.”

With wins like the one’s they’ve had on the last homestand, Curry said it feels really good, even though in the end it “doesn’t really mean much.”

“We’ve had a tough year and we’re not in a position for these points to really matter, but it’s been stressful and … there’s not any guys in that room that don’t take this seriously so the losses hurt and we’ve had a lot of them,” Curry said. “So to have a win, to have success and hopefully we have more down the line, it does feel good and it builds the confidence in the young players and the old players heading into the summer and the offseason.”

Iowa has also seen improvement on the other side of the puck. For the season the Wild have averaged 2.30 goals per game but in that last homestand, they scored 4.25 goals per game.

“I think we’re just paying a little more attention to detail, just trying to execute our game plan a little more, we want to shoot the puck a lot and it’s working out,” Iowa rookie Zack Mitchell said after tallying a goal and an assist against Oklahoma City on Friday.

Getting more shots on goal and pucks to the net has been a point of emphasis for the Wild recently, said Mitchell.

“It’s a big part of the game,” said Mitchell. “You watch all the best NHL teams, they all shoot the puck a lot and that’s what we’re trying to do.”

Iowa had 28 shots on goal Friday against the Barons.

The Wild will play their final home game Tuesday when they host the Toronto Marlies at Wells Fargo Arena at 7:05 p.m. before wrapping up the regular season on Friday and Saturday at Oklahoma City against the Barons.