Pannek makes her mark on Gophers 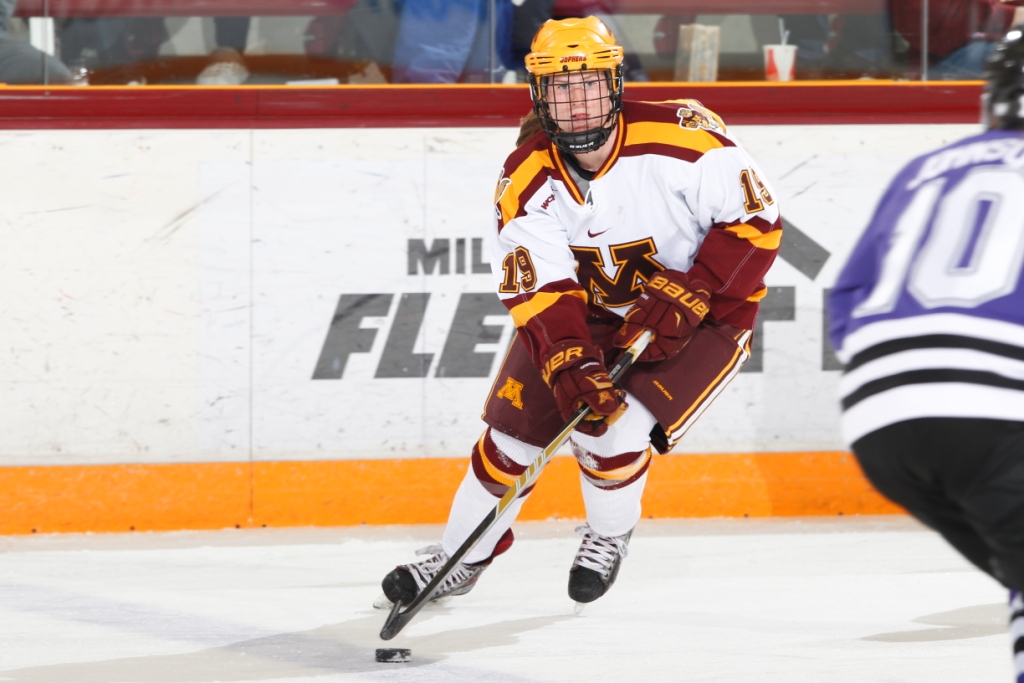 Minnesota’s Kelly Pannek has made an impact on the Gophers as a freshman. (Photo – Eric Miller/Gopher Athletics)

Brad Frost knew something had to be done.

Having just witnessed Bemidji State treating his team to a post-Halloween shutout loss at home the University of Minnesota women’s coach could see a chink emerging in the Gophers’ armor.

“We were a one-line team with (Hannah) Brandt, (Dani) Cameranesi and (Maryanne) Menefee,” Frost said. “When we lost to Bemidji we just had a sit-down with our team and said we have to get that secondary scoring and that’s where Kelly really emerged.”

Frost was referring to Kelly Pannek, a freshman from Plymouth, Minn. whose season took off after that meeting on her way to entering Friday’s Frozen Four semifinal against Wisconsin at Ridder Arena leading the nation’s rookies in scoring with 42 points (13 g-29 a) in 39 games.

Pannek had just notched her first collegiate goal in the Oct. 31 series opener with BSU, a 2-2 tie in which the Beavers skated away with the extra conference point by winning the shootout. But the goal served to validate what the former Benilde-St. Margaret’s standout had already been told by her current coaches and teammates.

“Anytime you score your first collegiate goal that’s a big thing as a forward, just to be able to take a deep breath and say, ‘You know what, I belong in this league, I can do it, I can still score,’” Pannek said. “At any level, confidence is such a huge thing and when you have it things are going well and if you don’t, it’s hard to believe in yourself and be able to perform on the ice.”

Pannek primarily centered Minnesota’s third line through the season’s first 10 games but, heading into a Nov. 14-15 series at Ohio State, Pannek was elevated to the second line, a unit which had accounted for just 16.8 percent of Minnesota’s overall scoring to that point.

“Our second line is really the key to our success because we know that our first line is going to generate things,” Frost said. “Kelly’s really enabled Rachael Bona and Meghan Lorence, two seniors, to have incredible years as well because of the way that she gets them the puck.”

Since Pannek was inserted between Bona and Lorence the chemistry between the three has been nothing short of remarkable. Bona and Lorence have benefited from Pannek’s emergence to the tune of 29 and 27 points, respectively since the move.

But Pannek is quick to point out what her linemates have meant to her as mentors on and off the ice and what an honor it has been to share a line with a pair of senior captains.

“I mean you don’t really think about it much, but those are two people [the coaches] expect to produce and they expect me to be right there along with them,” Pannek said.

Prior to their union, the trio combined to average 1.9 points per game, but together they have produced 92 points in 29 games or 3.2 per contest.

“To have a two or three line attack is a big key because one line isn’t going to be able to do it all so I think she, and especially her line, has really stepped up,” Brandt said. “She was a little frustrated in the beginning, goals weren’t going in, but she kept going and pushed on and she’s been rewarded for that.”

The road to Ridder 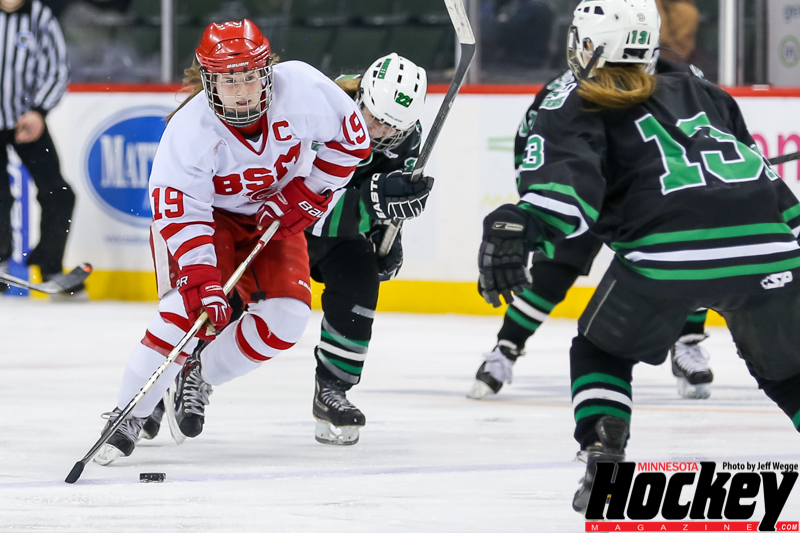 Kelly Pannek, then a senior at Benilde-St. Margaret’s, bears down on Hill-Murray D Samantha Boyer in the 2014 Class 2A state title game. Pannek scored all three of BSM’s goals but the Red Knights fell to the Pioneers 5-3 on Feb. 22, 2014 at Xcel Energy Center. (MHM Photo / Jeff Wegge)

The Gophers have reaped the rewards of Pannek’s breakout rookie season as they sit on the cusp of a possible third NCAA title in four seasons.  Just over 13 months ago, Pannek and her Benilde-St. Margaret’s High School teammates thought a state championship was within their grasp before the Red Knights fell to Hill-Murray in the title game.

As she reflects back, Pannek said, although a national championship is more significant, in the moment there is a similar feel between the two experiences.

Pannek, a three-time captain of the Red Knights, led all players with 11 points on seven goals and four assists in the 2014 Class 2A state tournament, capping off a 34 goal and 54 assist senior season for the Minnesota Ms. Hockey finalist and two-time All-State honoree.

Not a bad season considering hockey wasn’t even Pannek’s most dominant sport in high school.

She earned the first of six varsity soccer letters for the Red Knights as a seventh grader (she lettered “merely” five times in hockey) and led BSM’s soccer team to back-to-back state titles as a junior and senior. Pannek finished her career with 41 goals among 99 points and garnered the 2013 Minnesota Ms. Soccer Award.

“I’d say a lot of what I learned about hockey is from my dad.” — Pannek on her father, Todd.

Her two-sport acumen had Pannek choosing between offers from both the hockey and soccer programs at Minnesota but indicated the decision wasn’t a difficult as one might think saying, “Soccer for me was always really fun but I was never doing anything to improve.”

“I wasn’t forced to go to [soccer] practice but I was not always excited to go,” Pannek added. “But with hockey I loved going, whether it was those 7 a.m. practices or the ones 10 at night, I just loved it.”

Getting her to those odd hour practices was her father whom she identifies as her hockey role model. The third of four children (two older sisters and a younger brother) born to Todd and Molly Pannek, Kelly is the lone sibling to take up the sport her father grew up with and plays recreationally to this day.

“He’s just really supportive of everything I do, both of my parents are, but I’d say a lot of what I learned about hockey is from my dad,” said Pannek, who began her hockey journey at the tender age of four. “I’m really appreciative of how he brought me into the game and helped me continue through it.”

A season beyond imagination 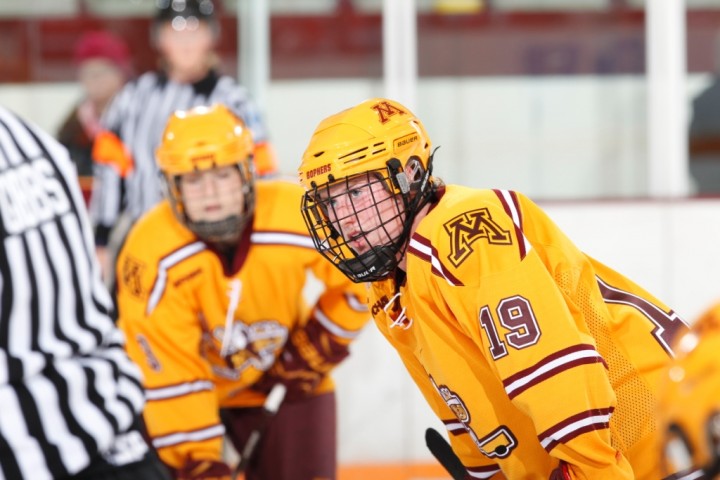 Pannek entered her freshman season with little to no expectations for herself, saying her goal was to simply come in, work hard, continue to improve and see where that got her.

“But if I were to picture my freshman year, I don’t think I’d picture it like this,” Pannek said. “It’s surpassed everything I could imagine and I’m really grateful for the opportunities I’ve had and the positions my coaches have trusted me to play in.”

It’s a faith Frost fully expected to have in Pannek, although even he admits it arrived a little sooner than he thought.

“When we recruited her we kind of looked at her as that type of player,” Frost said. “But to see her really jump from about a third of the way into the season to where she is now has been incredible. She’s made a huge impact for us.”

Pannek, a three-time WCHA Rookie of the Week honoree, was recently named to the WCHA All-Rookie Team. She recorded her first career hat trick on Nov. 24 in 5-0 win over St. Cloud State and her second six weeks later against St. Lawrence as part of her second consecutive six-point series.

“She’s so smart, she’s a lot like a Hannah Brandt … ” — Gopher coach Brad Frost on Pannek.

She established a career-best seven game point streak from Nov. 24-Jan. 6 in which she tallied 18 points on seven goals and 11 assists. Pannek’s 29 assists overall are good for third on the team behind Brandt and Cameranisi.

“She sees the ice at an elite level, makes great plays with the puck, strong plays with the puck,” Frost said. “She’s so smart, she’s a lot like a Hannah Brandt, not going to blind you with her speed but she makes such smart plays and has a great release.”

Comparisons to the two-time Patty Kazmaier Memorial Award finalist aside, Pannek credits Brandt, a fellow center, for much of her development at the position, particularly defensively.

Brandt says Pannek has made amazing progress over the course of the season.

“As a freshman coming in and playing center, I’ve been there and I know how hard it is to do, and she’s improved so much over this season,” Brandt said. “The defensive part is probably the hardest part to learn and she’s been one of our best defensive players and I think that says a lot for a freshman.”

But if Pannek were asked, she would say her rookie year says a lot about the leadership of a team which has been incredibly supportive, not only to her but to all her fellow freshmen, making their transition to Division I hockey as seamless as possible.

“You just look around the locker room at the seniors and captains, it’s just a great group of girls,” Pannek said. “You see what they’ve done in their career and you just kind of want to follow in their footsteps.”

With the Frozen Four on the horizon, that opportunity is there for the taking.