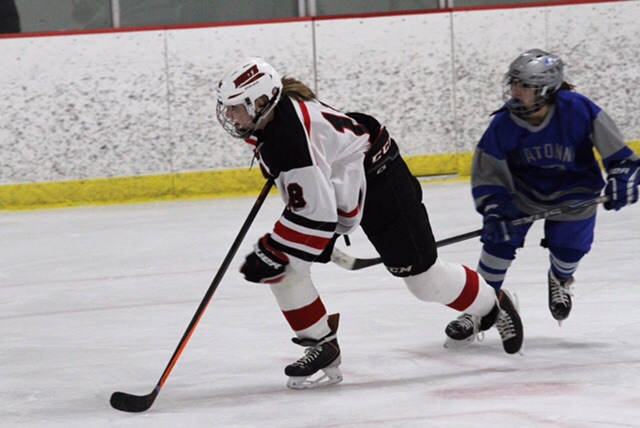 Lakeville North senior forward Riley Tousignant and her fellow Panthers’ girls’ hockey captains address the team before every game, often offering her thoughts as to the keys to winning the ensuing game.

But Tousignant doesn’t just tell her fellow Panthers what it will take to win; she shows them.

Held scoreless through two periods of its section 1AA quarterfinal against seventh-seeded Owatonna, Lakeville North’s offense needed a spark. Tousignant provided that as she took the puck from the blue line and put it top-shelf to give her team the 1-0 lead.

Tousignant’s goal ultimately provided the lift her team needed to escape with a 3-0 win over The Huskies at Ames Arena in Lakeville, Wednesday night. With the win, the second-seeded Panthers (ranked No. 7 in the state) will play Rochester Century, Saturday, in the 1AA section semifinal.

For Tousignant, leading by example is the ultimate indicator of a true captain.

“We can talk in the locker room all day,” Tousignant said of being a captain. “We can ask the girls, ‘Who’s going to do it next’. But I consider it a huge honor to go out there and [score] and lead by example because that’s what got us started.”

“No matter if she scores or not, she is always our spark plug,” Kochevar said of Tousignant. “In our locker room and on the ice, she’s always talking and always getting her teammates excited to play. That’s her role as a captain, but that’s how she is as a person.”

The game started out with an offensive charge led by Tousignant as the Panthers put Husky goaltender Kacy Borwege under heavy fire. But Lakeville North couldn’t seem to find the net as Borwege held strong with 35 saves on the night.

Coming off of an emotionally draining 3-0 win over crosstown rival Lakeville South to close out the regular season, a letdown in the first two periods wasn’t exactly a surprise for the Panthers.

“That happens,” Kochevar said. “I’m happy how the girls played. They didn’t quit when it was tied. I know there were a lot of nerves play a part. We pressed a little bit and then when Riley scored, you could just tell the relief that came from us. We played better hockey then.”

But in order for the Panthers to have a turnaround, Kochevar had to channel his inner Herb Brooks in the locker room during the second intermission.

“I took the line from Herb Brooks, ‘you’ll take this game to the grave if you don’t win this game’,” Kochevar said. “We didn’t have to do much yelling or screaming and no X’s and O’s. But we did send the message clearly.”

Lakeville North took his message to heart as they took the momentum from Tousignant’s goal and built on their lead.

Fellow captain Taylor Flaherty extended the Panthers’ lead to 2-0 with 8:33 left in regulation but the outcome remained in doubt until junior forward Morgan Manes scored on an empty net to seal the Lakevile North win.

Despite Wednesday’s late-game offensive success, the Panthers offense will need to start quicker moving forward if they want to play at the Xcel Energy Center in two weeks.

“We need to score early,” Kochevar said. “We play better when we score right away and it helps to relieve that nervousness.”

Having escaped Ames Arena with a narrow victory on Wednesday, Kochevar knows his team will need to eliminate those nerves as much as possible since opponents will only be better the farther they go in the postseason.

“It’s all uphill from here,” he said. “The girls had to get this first game under their belt, and we did that. Look for a better performance on the scoreboard next game.”