Panthers pull away from Eagles 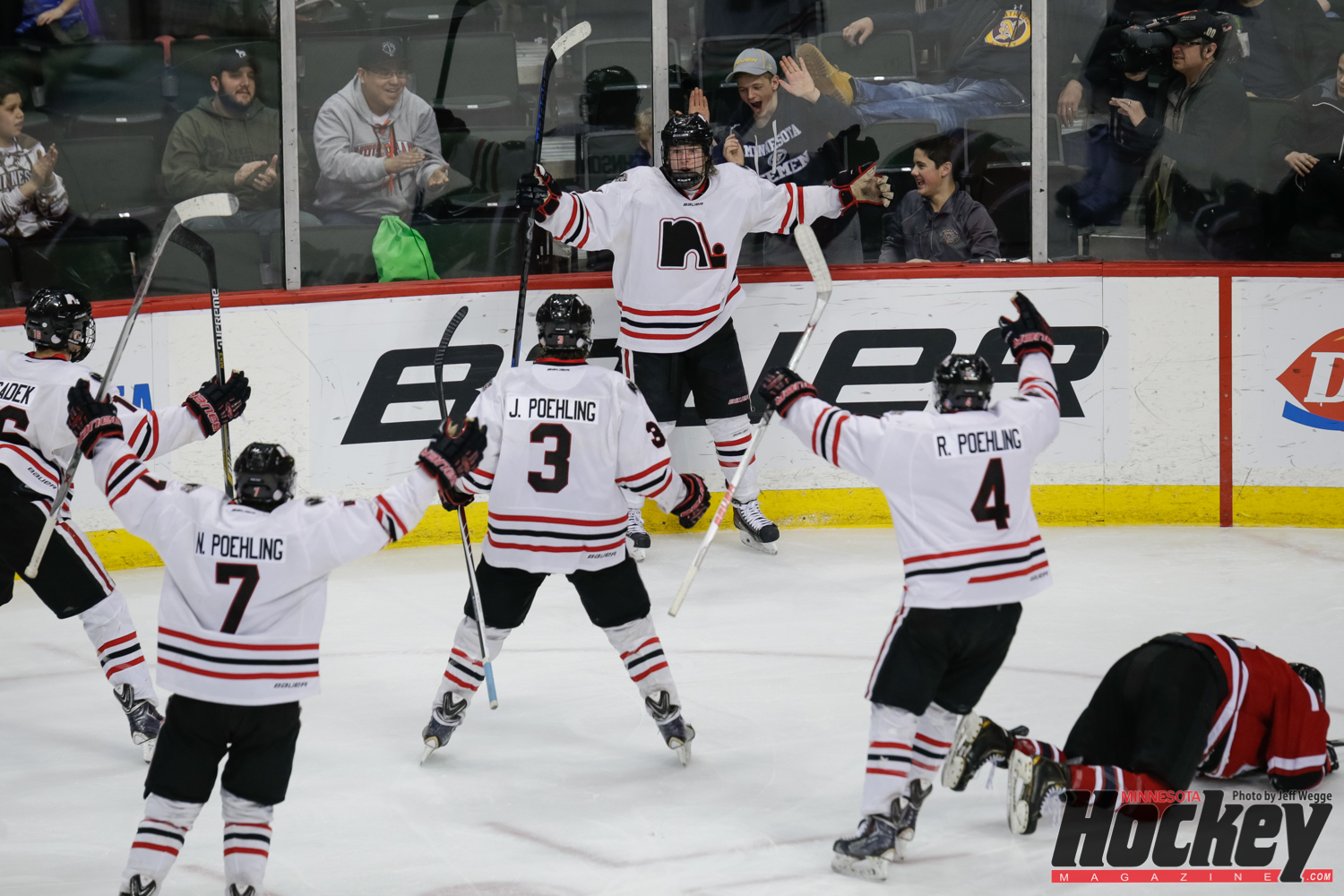 Lakeville North’s Max Johnson waits for his teammates to arrive to celebrate his third period goal which turned out to be the difference in the Panther’s 6-2 Class 2A semifinal win over Eden Prairie on Friday night at Xcel Energy Center. (MHM Photo / Jeff Wegge)

St. Paul — No overtime drama required this time around.

The Lakeville North Panthers broke open a tie game after two periods with four goals in the final 10 minutes to defeat Eden Prairie 6-2 at Xcel Energy Center on Friday night and make back-to-back trips to the Class 2A state title game.

In the second consecutive state tournament appearance for each team, Lakeville North and Eden Prairie last faced each other a year ago in precisely the same situation, playing the late game on semifinal Friday.

That night the Eagles opened up a 4-2 second-period lead only to see it evaporate with Nick Poehling scoring the Panthers’ final two goals including the winner at 8:26 of the second overtime for a 5-4 Lakeville North win.

But “free hockey” was not on the Lakeville North agenda on Friday.

Max Johnson broke the deadlock with a power-play goal at 5:43 of the third period, pouncing on a rebound of a Jack Sadek shot that Eden Prairie goaltender Shaun Durocher lost track of until it was too late.  Goals by Chaz Dufron and Jack Poehling extended the lead before Henry Enebak’s empty-net goal provided the final margin.

Lakeville North coach Trent Eigner said his team struggled through the first two periods with its normally reliable puck-possession game. The Eagles took advantage to the tune of outscoring the Panthers 2-1 in the second while outshooting them 14-5.

“Going into that third period, with what we’ve been through as a team this year and the success we’ve had, it’s not like our confidence ever wavered,” Eigner said. “But we just wanted the gears to kind of click and see if we could play one great period tonight and fortunately we did that.” 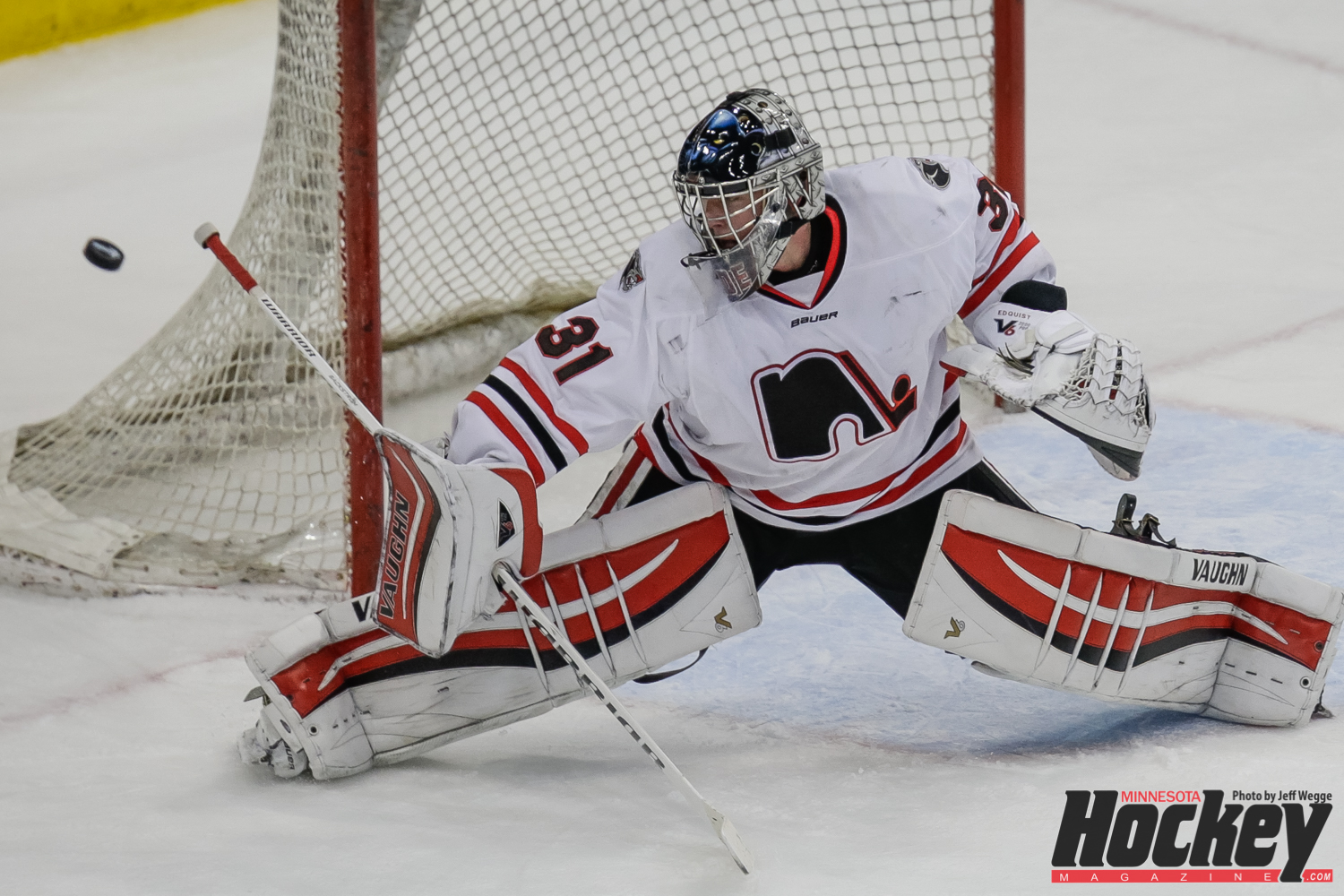 Lakeville North goaltender Ryan Edquist backstopped the Panthers’ win with 35 saves to help his team get back to the championship game. (MHM Photo / Jeff Wegge)

But the top-seeded and undefeated Panthers (30-0-0) were put in the unusual position of being outshot 37-21 for the game by a skilled and aggressive Eden Prairie team. The Eagles (19-10-0) played well but succumbed to mistakes at key times, a bit of bad luck and a hot goaltender in Lakeville North’s Ryan Edquist, who finished with 35 saves.

“We played great hockey, our kids, I’m proud of them,” Smith said. “Lakeville North’s goalie played really well. We were not in awe of Lakeville North, we don’t leave in awe of them, we respect them just like [we did] coming into [the game] but our kids played great.

“There’s a reason why they’re undefeated but I thought we were just as good tonight.”

The Panthers stuck first, capitalizing on an offensive zone turnover by the Eagles to springing Lakeville North’s second line of Enebak, Johnson and Taylor Schneider a 3-on-1. Using his linemates as decoys, Enebak carried the puck into the zone and fired a shot from the right circle past Durocher at 7:45 of the opening period.

The 1-0 score held into the intermission but Eden Prairie wasted little time potting the equalizer on Andy Aguilar’s wrister from the left point just 23 seconds into the second.

The teams traded goals in the period’s first 10 minutes by Lakeville North’s Sadek and Eden Prairie’s Nicky Leivermann. Nick Poehling’s slapper caromed off the end boards to Sadek and the University of Minnesota recruit buried a right circle shot at 4:18 while Lievermann finished an end-to-end rush with by roofing a blistering short-side wrist shot from the bottom of the left circle to make it 2-2 at 9:06.

Awaiting the Panthers in Saturday’s championship game is a red-hot and dangerous Duluth East team which took out No. 2 Edina in the early game on Friday after beating fourth-seeded St. Thomas Academy in the quarterfinals.

Eigner said he knows he won’t have to worry about his team’s preparation and work ethic on Saturday, as it’s been there for them all season. He added the key for the Panthers will be all about execution.

“For us, a puck-possession team, if we’re doing things clean, in terms of the way we’re playing early on in a game, I think it kind of builds confidence for us. But we fully understand that [Saturday] will be a humdinger for both teams.”