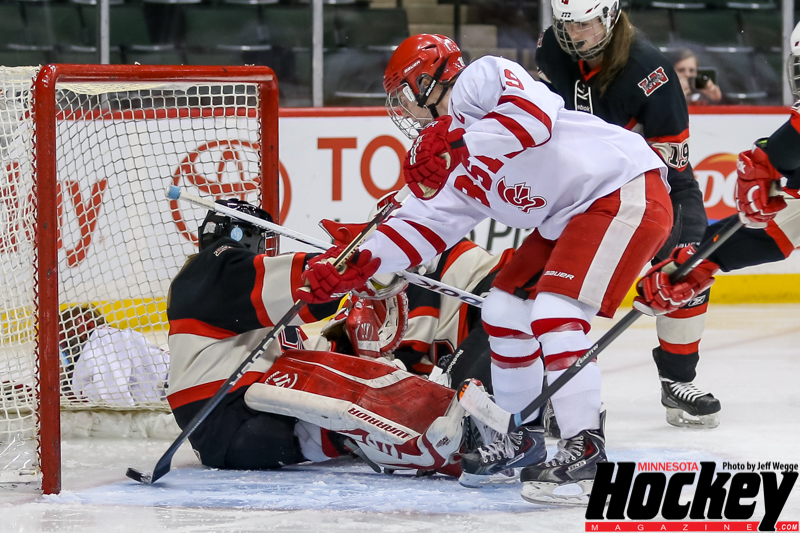 SAINT PAUL—Big-game players step forward in … well, big games and Kelly Pannek did just that in Benilde St. Margaret’s 2-1 win over Lakeville North in Friday night’s Class AA girls’ state tournament semifinal at Xcel Energy Center. Pannek, who led the Red Knights in scoring this season with 88 points (34-54–88), had an assist and scored the game winner to lead BSM to its third championship game appearance and first since 2004.

Pannek broke a 1-1 tie at 3:37 of the second period when she followed up her own shot to bang home a loose puck sitting in the crease behind Panthers goaltender Abby Cooper. The celebration was briefly interrupted as officials reviewed the play to determine whether Pannek’s teammate, Kaylee Druk had interfered with Cooper but it was determined Druk was pushed by a Lakeville North player.

“When Kaylee kind of got pushed in front and the goalie was down you kind of hope that the puck’s going to pop out,” Pannek said. “It was just laying right on the [doorstep] and I just hammered it home.”

The Red Knights held the Panthers in check the rest of the way including the game’s final minute when BSM withstood Lakeville North’s late rally with Cooper on the bench for an extra attacker and Benilde’s Brittany Wheeler serving a cross-checking penalty.

It was a situation Pannek admitted the Red Knights don’t often face.

“But I thought we handled it really well,” Pannek said “To be able to kill that off with 45 seconds left is huge for us.”

“The third period I told them we’ve got to play a system of third person high and they executed that to perfection,” Benilde-St. Margaret’s coach Dave Herbst said. “So I’m pretty proud of them the way we carried out our game plan and kept everything simple.”

BSM goaltender Abigail Miller backstopped the win with 13 saves while Cooper turned aside 24 shots for the Panthers. The Red Knights, state champions in 2002 and 2004, advance to face 2013 runner-up Hill-Murray at 7:00 p.m. Saturday night in St. Paul. The Pioneers defeated Eden Prairie 1-0 in the other Class AA semifinal.

Lakeville North, which was making its third consecutive state tournament appearance, came to St. Paul with high aspirations after a third place finish a year ago. But the ninth-ranked Panthers mustered only 14 shots on goal in their effort to advance to the championship game for first time.

“There was just no heart out there tonight and I didn’t see it in anyone,” a visibly frustrated Lakeville North captain Dani Sadek said. “The last few years here we’ve had a lot of heart and it just wasn’t there tonight and we came up short.”

“We were waiting for somebody to take over … and get a spark going,” Lakeville North coach Buck Kochevar said. “We did have shots on net but no one was driving hard and it’s frustrating.”

The contest got off to a relatively inauspicious start with each team barely dipping a toe in the water offensively as they combine for just two shots on goal through nearly the game’s first ten minutes. But the Red Knight’s drew first blood on Kassandra Petersen’s goal at 13:13 when she received a cross-ice pass at the right point, sidestepped oncoming Panther forward Megan Lebens and fired through a screen beating Cooper on her blocker side.

But Druk was sent off for hooking at 15:38 and the Panthers took advantage when captain Dani Sadek scored her ninth of the season, rifling a shot through traffic over Miller’s right shoulder with 10.9 seconds remaining in the first period. To the disappointment of Sadek and her teammates, however, it was the only shot to elude Miller all night.

“By the time we got anything going …,”Kochevar began to say before Sadek interjected saying, “… the damage was done.”